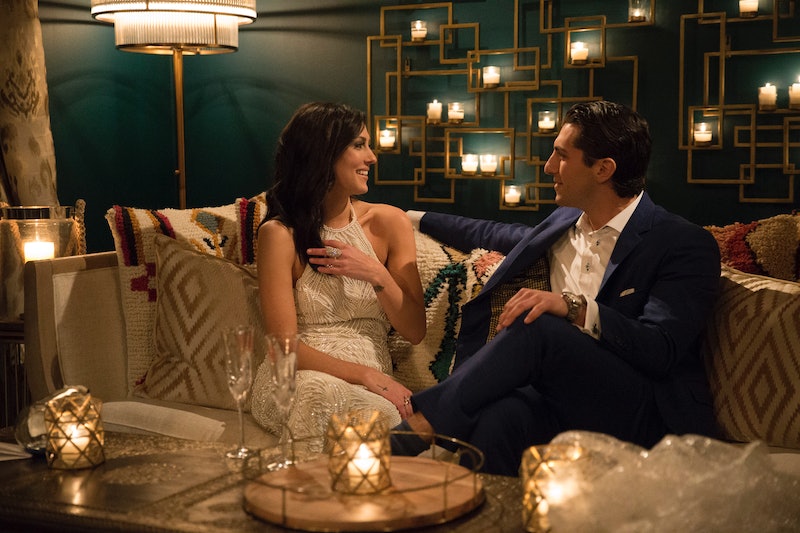 Now that the latest Bachelorette Becca Kurfin has given her final rose to Garrett Yrigoyen, it's time to start talking about the next Bachelor. And it appears that Becca has a suggestion for who should be the next Bachelor and he should look very familiar to fans of her season. Kurfin thinks Jason Tartik would make for a good Bachelor — and she's not alone.

Appearing on Good Morning America on Tuesday with her new fiancé, Becca suggested a few different guys to star on The Bachelor Season 23 when it returns next year. "“I mean, I would say Jordan [Kimball] for his one-liners,” she joked of the Bachelorette contestant Becca Martinez said was "underrated," before giving a more serious answer. “I have a soft spot for Jason,” Becca said of the contestant that made it to her final three.

As People pointed out, Jason went home before they got to spend a night together in the Fantasy Suite, but that doesn't mean he doesn't deserve another chance to spend a night in that infamous Bachelor room. “I think he’s so charismatic," Becca told GMA. "He would be so open to all of the girls on the journey.”

Kurfin's fiancé agreed. While Garrett joked that Leo Dottavio should be in the running "for his good hair,” he also felt that the 29-year-old Jason would be the best man for the job. "I think Jason would be great,” he said.

While the star of The Bachelor has often been a recent Bachelorette runner-up, meaning Becca's runner-up Blake Horstmann is currently the frontrunner to be the next Bachelor, Rob Mills, ABC’s SVP of alternative series, told Variety that the network has yet to pick its suitor for Season 23. He said that the "network isn’t tasked to make any casting decisions until the end of summer" and that the casting team "will wait to see the audience’s reception to last night’s gut-wrenching finale." Mills added that fan reactions to the new season of Bachelor in Paradise could also be a factor, pointing to recent Bachelor Nick Viall as someone who emerged as the network's top choice after his turn in Paradise.

As for who's in the running right now, Blake, Jason, and Grocery Store Joe have all made the shortlist. Mills told Variety that fans have a definite say in who they pick so fans of Jason fans might want to make themselves known. Already, Twitter has endorsed Jason as the next Bachelor, assuming he'd be a very chill voice of reason. It's also why fans think Jason would be a good fit for Bachelor In Paradise, which — if he doesn't find love — could land him the Bachelor job.

However, not everyone in Bachelor Nation wants to see this happen. In her Bustle breakdown of the Bachelorette "Men Tell All" episode, Bekah Martinez made it clear she's not Team Jason. "I still cannot for the life of me understand the Jason infatuation," she wrote. "He is so obviously putting on a show. I trust my gut, and my gut tells me there’s something a bit slimy about him."

Bekah aside, it's clear that many fans want to see Jason get back into the Bachelor Nation game, and with Becca throwing her support behind him, there's no telling what could happen when The Bachelor returns.