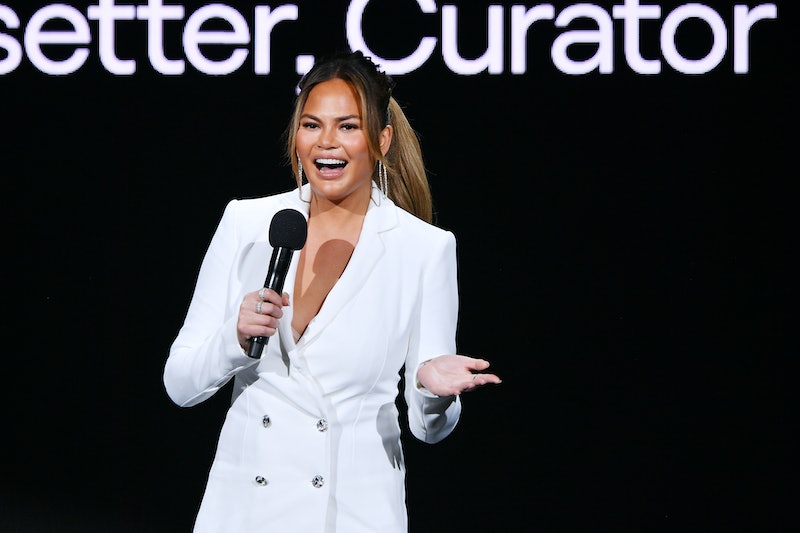 Part of what makes Chrissy Teigen so likable and relatable is that she's willing to share almost anything about her life on social media. However, the cookbook author recently revealed that that there is one thing that she won't put online — in a recent interview with PopSugar, Teigen admitted that she refuses to share anything about her kids that they might find embarrassing one day.

While she joked that there is "no limit" to what she'll reveal about herself to her millions of social media followers, Teigen confessed that she's very careful when it comes to deciding what to post on Instagram of Twitter about her 3-year-old daughter, Luna and 1-year-old son, Miles. "I don't really post any things that the kids would be ashamed of or mad at me for posting," she explained. "I see a lot of people posting their kids' tantrums and having supermeltdowns. I don't post that stuff just because that, to me, is like — I wouldn't want someone to do that."

And while some people might be hesitant to share things like their struggles with postpartum depression or learning to accept the way their bodies have changed over the years, Teigen has seen first-hand the way being open and frank with her 11 million Twitter followers and 24 million Instagram followers has changed peoples' lives. "So many people come up to me about the postpartum story," she told PopSugar, "and I love any of those encounters because usually, I'm just walking through the airport or on the plane or just out at lunch or something and people come up and they've read something that you wrote that was really personal, that's always really wonderful."

She continued, "I love talking to people about that. They always have a story to share. If a man comes up to me, it's usually because their wife is going through it."

In addition to getting to hear from other people who have been helped and affected by her honesty, Teigen also revealed that she's made a lot of close relationships with people thanks to her social media activity. "There are so many devoted fan pages to my kids, and that kind of stuff is just so sweet to me that they would take time. It [was Miles's birthday], so I got so many collages and things — I didn't necessarily remember these photos, but they put them together. They're so beautiful. They're so cute. And it sparks all these memories for me."

"I really do have wonderful, wonderful fans. I actually think that the ratio of it is incredible, and that's what keeps me going on social media," she continued. "I count them as actual friendships with them. Some people I've been talking to for like 10 years now online, so to me, that's a bond; that's a friendship. So it's really cool."

In addition to forming bonds with her followers and fans, Teigen has previously spoken about how sharing her thoughts and beliefs on social media has inspired her to take her activism beyond just Twitter and make a real difference in the world. "I looked at John [Legend] the other day and I said... 'Everything that's happening in Alabama and women's rights being stripped away, you wonder, what can you do? Like what can I say?'" she told Bustle, referring to Alabama's extremely strict abortion laws.

"Obviously everyone probably knows my beliefs. I don't know what I can say to change anything, and I think a lot of people feel that way," she continued. "John and I like to take it a step further and connect directly with the ACLU, or connect directly with people that are being affected in Alabama, and make our donations that way." That desire to make a real difference has inspired her to do things like donate $72,000 per family member to the ACLU last year for President Trump's 72nd birthday.

And while she's admitted that there can be a major downside to being on social media — and also to having everything she shares online become a major news story — Teigen does ultimately think that there is a lot of good that has come out of connecting online. "Social media can be horrible sometimes, but it can also do really wonderful things for people and I think it's become a community of women and even men, honestly, that are so proud to stand for each other and have each other's backs," she told Bustle in January 2018.

"I think if there was a reason that social media was invented, it would be for things like this, where we can bond and feel comfortable with one another and feel like we're in a safe place where people are going to respect what has happened to us and respect what we have to say," Teigen added.

Thankfully, it sounds like the good social media aspects far outweigh the bad for Teigen, which means there are plenty more hilarious tweets, relatable admissions and adorable baby photos to come for her followers. And maybe, if we're really lucky, we can also form a friendship with Teigen via social media.