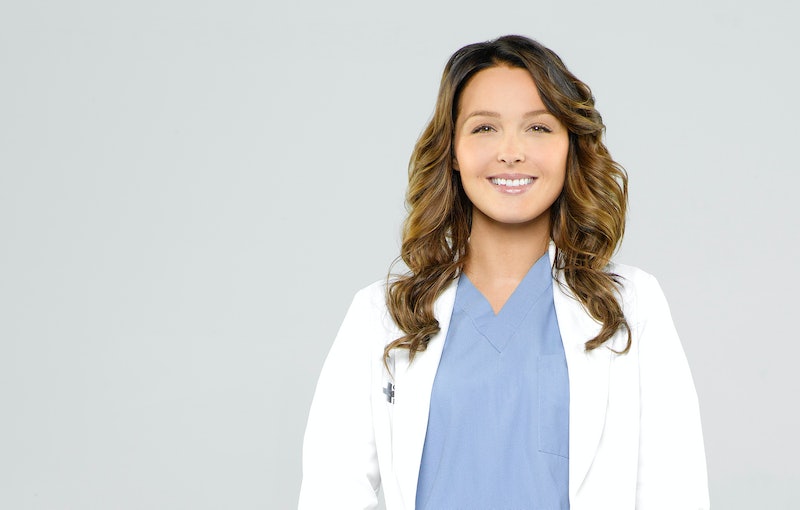 According to one Grey's Anatomy star, the hospital drama is far from over. While talking about her voice-over role in the Shadow of the Tomb Raider video game in the Comic-Con video suite, Camilla Luddington revealed a major Grey's Anatomy spoiler to TV Line, as well as a couple of potential character plots — all of which hint that the series will be around for a little while longer. So don't get ready to say goodbye to the ABC staple just yet.

Aside from bidding farewell to two really crucial Grey's characters — Arizona Robbins and April Kepner — Season 14 ended on a rather unusual note. Alex Karev and Jo Wilson finally tied the knot, and no one died. Like, there was no major catastrophic event that took the lives of any fan-favorites. No bomb threat was reported, obstructing the nuptials. And no, there was no plane crash that took out Karev and Wilson's wedding guests. And seeing as heartbreak has pretty much been part of Grey's season finale since it began, closing out Season 14 on such a high was totally against the grain.

The beauty from the Season 14 closer must've had a huge effect on Luddington, who plays Jo Wilson, as the Grey's star couldn't help but think about all of the positivity to come with she and Karev's (Justin Chambers) future together. And in the midst, she revealed, without giving too much, of course, how Season 15 will potentially open.

According to Luddington, there really isn't a huge timeline jump between the Season 14 finale and the Season 15 premiere. "We pick up right where we left off," Luddington told TV Line. "There's not like a massive time jump."

Luddington then fantasized about possible storylines for the newlywed, one of them being a major development with Jo's estranged family members. "I do hope that at some point Jo does find out who her family is," Luddington said in the TV Line interview. "I feel like that's the final mystery behind her that she doesn’t know any information on."

But even the Grey's star couldn't get too caught up in all of the positive possibilities for her character, however. Everyone knows just how the series likes to shake things up with the most heartbreaking scenarios. According to Luddington, she has a feeling that something massive is in store for Jo Wilson, and to TV Line said,

"I’ve heard rumors — rumors-rumors — that Jo might find her specialty this season, which is really exciting and is a long time coming. I'm interested to see what it is."

Along with Jo, Luddington also has high hopes for Ellen Pompeo's character Meredith Grey in the new season.

Ever since Meredith's potential love interest Nick came into the fold, as played by Scott Speedman, no one, not even Luddington herself, can get enough of him. Luddington is adamant about the need for romance to bloom between Nick and Meredith, and honestly, who can blame her? With Dr. McDreamy, better known as Dr. Derek Sheperd out of the picture, sadly, of course, it would be nice to see Meredith have another love interest.

With the show's creator Shonda Rhimes leaving ABC for Netflix — trading in the many restraints of network television for the creative freedom of a streaming platform — stressing out about the fate of Grey's Anatomy is totally a thing. But in the same breath, the show's star and executive producer Pompeo signing a two-year deal with the ABC drama should provide a bit of solace to those wishing that Grey's never has to come to an end.

If anything, Luddington's optimism about the show's direction hints fans will continue to have a front-row seat into the lives of the Grey-Sloan crew — there are just too many possibilities still left to explore for the show to say goodbye just yet.