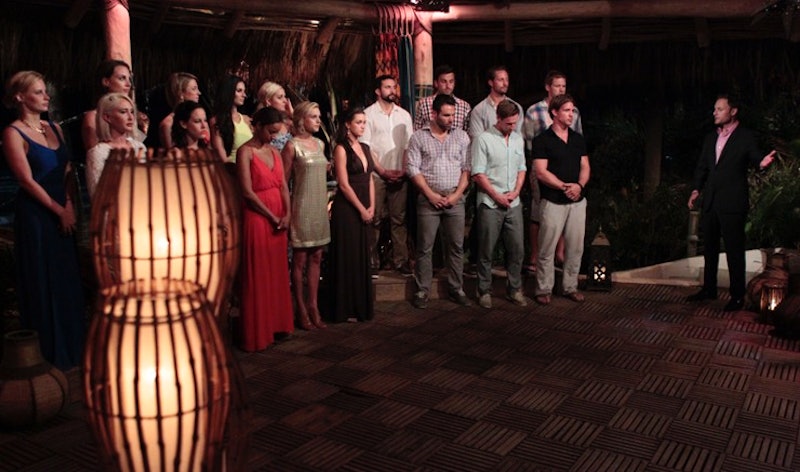 By now, you've probably heard that filming on this season has been halted, but has Bachelor in Paradise production ever stopped before? The answer to that question is no, which is what makes this situation all the more concerning. Even though it takes all summer to air for us normals, Paradise has the shortest production period of any Bachelor Nation show. It reportedly clocks in at just three weeks of filming, so it would take something big to derail it.

Earlier: In three previous seasons of the show, nothing has risen to that level. Even if there have been behind-the-scenes pauses on location that we don't know about, contestants have never been flown back out before. It's also never happened before that a contestant would be given their phone back without getting sent home. And with Season 4 contestants like Corinne Olympios and Alexis Waters back on social media for the first time since May 31, it appears that's exactly what happened.

It's a really big deal, to be honest, because it's completely unprecedented. Especially considering all the times that filming hasn't been suspended in the past. We've seen contestants go to the hospital, dangerous weather, screaming fights, and on-camera sex acts. (With the appropriate areas blurred out, of course.) We've seen threats of violence, actual violence, and a level of inebriation so severe that Chad Johnson is rumored to have pooped his pants. And that's just the physical stuff. Fans of the show have also been witness to more emotional trauma, like lying, manipulation, rumor-mongering endless tears, and flat-out bullying.

Whether you love it or you don't, there's no denying that the show has covered a vast array of hard-to-watch behaviors in the past. And even with all that, they've never had production halted before. However, given what rumors are claiming happened during filming, I think shuttering production was the right call. While ABC and Warner Bros. have yet to comment on the allegations that a reported drunken hookup between two contestants, one of whom was allegedly too drunk to consent, resulted in a producer reportedly filing a "third party complaint" for "misconduct," their statement prior to these rumors makes it clear that they are looking into the incident:

"We have suspended production and we are conducting a thorough investigation of these allegations. Once the investigation is complete, we will take appropriate responsive action.”

Hopefully, filming will resume and we'll get to watch Season 4 as planned, but the safety and comfort of the cast and crew is always my top priority. I'm glad to see that production is making it theirs as well by investigating this incident before even thinking about resuming as normal.