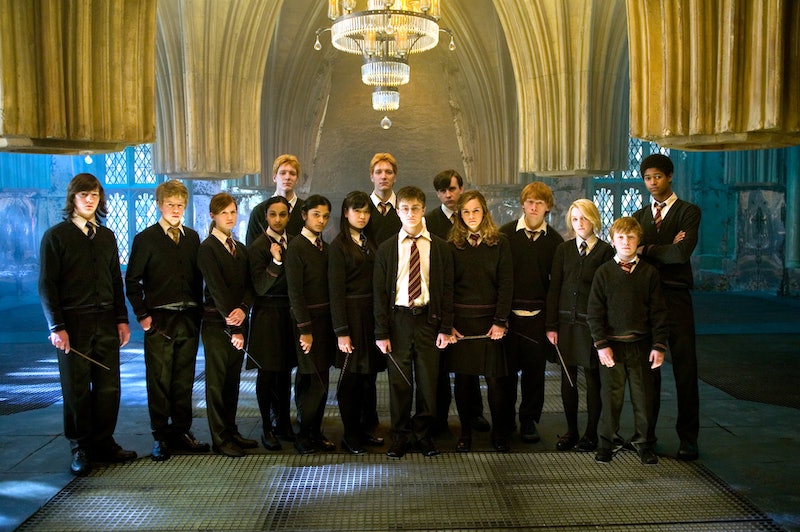 OK, first things first: yes, you should absolutely be doing everything in your power to resist Trump's presidency. I'm gonna go ahead and bold this for the sake of any confusion: The suggestions I make for each Hogwarts House on how to resist Trump's presidency are not at all meant to limit any House to that specific thing. Everyone can, and should, do all of these suggestions if possible. We may be in different Houses, but within them we all have our own individual strengths and unique voices to bring to the table.

Now, to address the next question you may have: What on earth does Harry Potter have to do with the political dumpster fire that is happening in the world right now? The answer is simple: everything. Whether you were paying attention or not, Harry Potter is one of the most inherently political works of our time, addressing racism, classism, and discrimination in a way that very few books aimed at children could ever successfully convey. And yes, there is some push back in politicizing Harry Potter — in fact, the subreddit for the fandom recently banned political talk from its forum, which is a whole other essay's worth of nonsense — but the truth is, there is no time for turning our lessons from Harry Potter into action quite like right now.

And while comparing Donald Trump's agenda to the happenings in Harry Potter is, of course, oversimplifying a lot of massively complicated, multi-faceted issues, the general gist is the same: Under his presidency, marginalized groups are threatened; people's safety is compromised, and their health is in jeopardy; and America, a country built on the principle of welcoming immigrants, is not only closing their doors to them, but actively trying to vilify them as well.

And guys, a brief and unsettling reminder — this is only the first week.

So yes, right now, it is entirely overwhelming to watch what is happening in the world. Your brain is reeling just trying to keep up, and your heart is hurting knowing just how many people will be affected by it. But you are not powerless. You are not alone. And Dumbledore's Army? It's about to get very, very real. Here's what each House can do — and so much more! — to resist Trump's presidency.

This past weekend, we watched hundreds of thousands of women not just in our nation, but globally, march for women's rights. Days after that, Trump's new immigration laws sparked more protests, and scientists are planning another march as we speak. The momentum is strong right now, but we've got another four long years ahead of us — and that's where the Gryffindors come in.

Gryffindors, use your innate bravery and your passion to make sure that that momentum doesn't die. It will be you on the front lines of every march, yelling the loudest in every protest, holding your signs up and braving the weather, the scrutiny, the attempts to silence resistors. It will be you organizing marches for everything from the Black Lives Matter movement to the Islamophobic immigration laws to reproductive rights to the attempts to silence the media. When everyone else thinks the work is done, you'll be the one inspiring your friends to keep at it, as fiercely and tirelessly as ever.

If you're looking for how to get started, lend your voice and your advocacy to these upcoming marches — and then get started on arranging your own.

After months of a campaign rooted in gaslighting, it shouldn't come as a surprise that we're only a week into his presidency and the term "Alt Facts" has already been added to the nation's lexicon. Between the misinformation being spread and Trump's attempts to discredit the media and prevent organizations like the EPA from issuing releases without his administration's approval, it's only going to get harder to suss out hard facts over the next four years.

Here's where Ravenclaws come in — not just because you're smart, but because you're creative and imaginative as hell. Yes, it will fall on the Ravenclaws to stay diligent and stay informed in this age, and educate their friends and neighbors on what's happening in the world. But it will also fall on the Ravenclaws to find tricky ways to get that information out there. Whether it be through the epically sassy but desperately necessary Rogue Twitter handles that have launched in place of government handles, arranging secret Facebook groups to spread information, or finding clever ways to help people put the issues and their consequences into perspective, the Ravenclaws will be the subtlest, sassiest part of this resistance.

People may mock our house, Hufflepuffs, but never let them forget: During the Battle of Hogwarts, we were the only House aside from Gryffindor that stayed in full numbers for the fight. And we will always be there — steady, compassionate, and tireless. It is the hallmark of our house, and it is exactly what we will need to get our friends through this presidency.

Some of the momentum is going to die down. It's inevitable; at some point, people will get tired, and will slip into letting this become the new normal. That is where the Hufflepuffs come in, to organize, and to inspire, and to elevate. It will be the Hufflepuffs up at all hours doing the legwork to organize events, to field questions, and to make sure everyone is where they need to be. It is the Hufflepuffs who will keep writing postcards and making calls to politicians, and streamline the information so everyone else knows how to do it, too — even the introverts among us. It is the Hufflepuffs who will notice first when their friends start to crack, overwhelmed by what's happening, and be there to lend their hand, lend their ear, and remind everyone to take care of themselves so they can keep fighting the good fight.

And then, when it is time to vote — not just in 2020, but in all the opportunities between now and then — it is the Hufflepuffs who will support and elevate the worthy candidates, who will go door-to-door campaigning for them, who will build them up brick by brick and inspire people to get out back and out and vote.

No, the work will not be glorious, and no, it will not be easy. But we are Hufflepuffs, and we will see this through to the very end.

Listen, Slytherins — it's not 1997 anymore, and we're not really at Hogwarts, so let's dismiss the whole "Slytherins are evil" thing for the purposes of this exercise. Stripped of all that, you Slytherins are ambitious and intelligent and tenacious as hell, and will make whatever kinds of sacrifices you must to get what you want — and if what you want is to ensure that no politician like Trump ever finds themselves with this kind of power again, then Slytherins are the ones who are going to get the damn job done.

I know, I know. It's A Lot. But if you want to give it a go and aren't sure where to start, here are 17 things you can do in 2017 to prepare to run for office, even if you have no experience yet. The battle may be four years long, but this fight is going to be a long one — we need you on our team.

Learn more about how Harry Potter fans can help by reading up on the real life Dumbledore's Army, aka the HP Alliance.