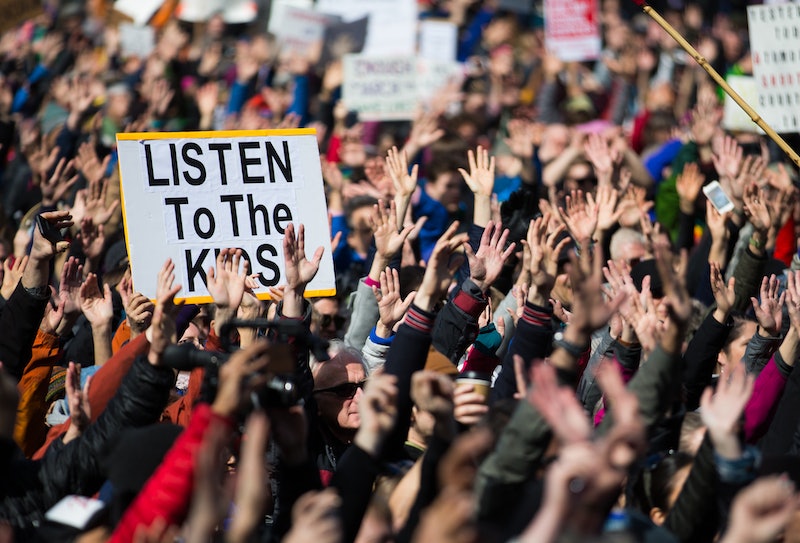 During Saturday's massive nationwide March for Our Lives demonstration, hundreds of thousands of young activists took to the streets carrying protest signs demanding changes be made to America's gun safety laws. Many of these signs bore the words of J. K. Rowling's beloved fantasy series, Harry Potter. But the story of the Boy Who Lived and led a revolution was on more than just poster boards this weekend: Harry Potter was very much on the minds of the Parkland student survivors who have vowed#NeverAgain, and is in the hearts of an entire generation of kids who were born in an age of regular mass shootings. In the wake of Saturday's demonstration, it's clear that Rowling's children's books have had a real and lasting impact on those who grew up reading them. It's even clearer that we need to continue to create more meaningful and more diverse children's literature, because what we read as children can, in some way, shape the adults we become.

In the aftermath of the mass school shooting in Parkland that claimed 17 lives at Marjory Stoneman Douglas High School in February, student survivors and young activists across the country have seized the opportunity to speak out against gun violence and on behalf of sensible reform. For many of these teens, the Harry Potter books have served as a helpful lens through which to interpret their situation, and a powerful source of inspiration that has shaped their actions in the aftermath. David Hogg, one of the more visible and outspoken leaders of Parkland's #NeverAgain student group, even used Harry Potter lingo to describe America's political scene when he likened Florida Governor Rick Scott to Voldemort, but he is far from the only young person to reveal the many ways in which Rowling's books impacted his generation. Whether they are consciously aware of it or not, these teen activists have been influenced by Harry Potter's narrative of good versus evil, right versus wrong, young versus old.

As Time national correspondent Charlotte Alter first pointed out Saturday in a thoughtful Twitter thread that has since gone viral, "Harry Potter has almost become their playbook: the Ones Who Lived fighting an ‘evil’ force that has infiltrated the government and brainwashed adults using only the powers they’ve learned in school: illumination, protection, disarmament.”

In The Prisoner of Azkaban, Hogwarts' consistently quote-worthy headmaster reminded students that "happiness can be found even in the darkest of times, if one only remembers to turn on the light." Isn't that what the survivors of Parkland did when they chose to transform what is arguably their darkest trauma into a message of hope for a brighter future? In Order of the Phoenix, the hardened but kind Sirius Black reminded a confused Harry that "We've all got both light and dark inside us. What matters is the part we choose to act on. That's who we really are." When students came together to demand change, rather than retreat into their corners of anger and hate, just days after watching their friends die in front of them, didn't they show their true selves? In The Deathly Hallows, loyal Order member Kingsley Shacklebolt made it clear that "Every human life is worth the same, and worth saving." Every time these teen activists tweet #NeverAgain or chant "Enough is enough," aren't they saying the same thing?

Rowling may have started writing her iconic series over 20 years ago, but the Harry Potter books seem perfectly timed for today's young readers and the violent, confusing, borderline dystopian world they live in. For kids like the Parkland shooting survivors and other young activists, the battle Dumbledore's Army and the Order of the Phoenix waged against Voldemort, the Death Eaters, and the corrupt Ministry of Magic over the course of seven books mirrors the one they have just started waging against mass shootings and the systems that allow them to thrive in America. Sure, there are no fire breathing dragons or flesh-eating ogres in Washington, D.C., but there is the all-powerful NRA and the weak-willed politicians who shamelessly push their pro-gun agenda. Like in Rowling's wizarding world, the only people willing to stand up to them seem to be kids, and yet, adults insist on putting them and the iconic book series down.

For as long as young people have been singing the praises of the Harry Potter series, adults and older readers have been criticizing it as childish, fantastical, and low-brow. (There is, afterall, a considerable amount of time spent on things like bogey-flavor jelly beans and a made up wizarding sport that requires a broom.) How can a series that revolves around magic be taken seriously, especially one written for children? Even more, how can it possibly teach real-life lessons when it is coming from such a fantastical place, and how can those who read it really learn from it?

Adults may be quick to dismiss the young Potterheads as naive dreamers, inexperienced altruists who want to believe that there's a magic spell to fix everything, but as Ella Cerón said in her article on Harry Potter and the Parkland survivors for Teen Vogue, the kids behind Never Again MSD are anything but. "By referencing Harry Potter, few people are suggesting that they wish they could use magic to fix the world," Cerón argues. "Instead, the stories serve as inspiration, the way Katniss Everdeen inspired the nation of Panem to rise up against the Capitol, and the way Tris Prior helped take down not one but two corrupted government groups. These books aren’t a blueprint, yet their language does not mean they should be underestimated."

The Harry Potter books have not just entertained a generation, but helped define it. Over the course of seven books, eight movies, and a growing excess of supplemental material from the Wizarding World, Rowling's story about a lonely and unloved kid becoming the ultimate hero instilled in readers important lessons about friendship, loyalty, honesty, kindness, and belonging. It served up inspirational quotes and empowering messaging spoonful after wholesome spoonful. But it also pushed young people to think about racism and prejudice, class disparity and sexism, and the hard fact that there is a lot of gray area in between wrong and right. For the kids who grew up reading them, the Harry Potter books served as a fantastical roadmap through lives unpredictable twists and turns. For the kids in Parkland, that roadmap lead straight to this moment, and this movement.

It's true that Harry Potter series tells a fictional, utterly fantastical story, and an imperfect one at that. For starters, all seven books seriously lack diversity, and the author's tendency to include elements of it after the fact — Dumbledore's sexuality, the possibility of Hermione being black — can cause more damage than good. There are also obvious issues of privilege and abuse that, as an adult revisiting the series, are difficult to read. Despite its flaws, though, the Harry Potter series has served as an inspiring and more importantly accessible blueprint for young people who are trying to navigate their world and make a difference in it. As Lisa Miller points out in her piece about YA literature and its relationship to student activism on The Cut, stories like Harry Potter are "activist acts in themselves, providing a language and a reference point for real-world countercultural movements."

Now more than ever, it's the responsibility of the YA community to make sure the reference point we're providing young people is inclusive in its portrayal of race, gender, sexuality, class, and ability. As 15-year-old Parkland shooting survivor Anna Crean told The Cut, "We can make a difference because that's what books and movies have told us since we were little."

By being mindful of what we are creating for kids and teens to read, by including characters every kind of young reader can see themselves in, we can tell the next generation that, no matter what they look like, who they love, or where they come from, they can make a difference, too.