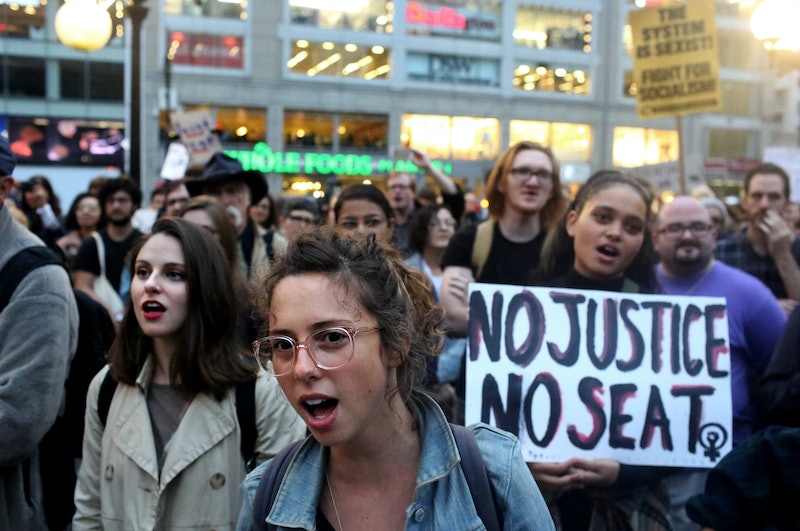 On Oct. 6, 2018, the U.S. Senate voted to confirm Brett Kavanaugh to the Supreme Court after multiple women accused him of sexual misconduct (he has denied the allegations). And nearly one year later, as the Supreme Court gears up to hear a major abortion rights case, Kavanaugh's influence as a conservative-leaning judge is just as much of a talking point. If you'd like to make your voice heard on Kavanaugh and the future of Roe v. Wade, you have several options.

As it stands, Kavanaugh will sit on the Supreme Court bench as a Justice for the rest of his life or until he chooses to retire. And while federal judge impeachment is incredibly rare, some advocacy groups argue that further investigation into Kavanaugh's conduct is just as necessary today as it was last year. In addition to the allegations against him, for instance, thousands of documents detailing his record while serving in the George W. Bush administration were never released. Furthermore, he has the potential to be the deciding vote in abortion rights cases that could chip away at Roe v. Wade.

If these concerns resonate with you, you can start by taking action on Oct. 6. Here are just a few ideas:

More like this
Are John Legend & Kanye West Still Friends? The Singer’s Latest Update Is Candid
By Brad Witter
Rishi Sunak's Wife Is Worth More Than The Queen
By El Hunt
The Best Time To Date After A Breakup, According To Experts
By Bustle Editors
Samsung Just Dropped 2 New Foldable Smartphones
By Michelle Toglia
Get Even More From Bustle — Sign Up For The Newsletter