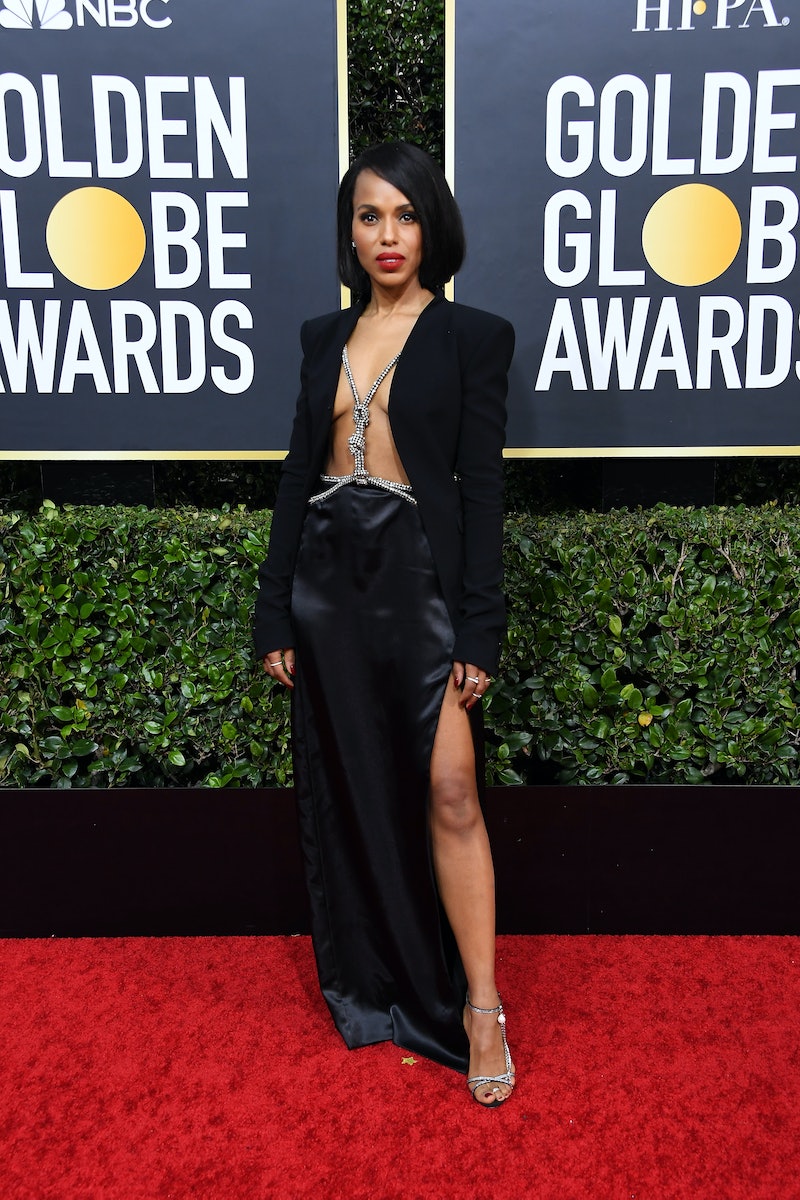 Move over, Timothee Chalamet — the ladies are coming for your red carpet harness. Both Kerry Washington and Cate Blanchett wore harnesses to the 2020 Golden Globe Awards, and while the style may have been dominated by men in 2019, the women of Hollywood are coming into 2020s awards season strong in their chic harnesses.

For the Golden Globes, both Kerry Washington and Cate Blanchett worked a glittering version of one of 2019's biggest fashion trends, and they worked it well. For her Golden Globes dress, Washington chose separates by Altuzarra. The floor-length satin column skirt featured a thigh-high slit. She paired the look with a blazer from the label, but the major moment was underneath. Washington's sparkling harness began by crossing her shoulder and meeting in two twin knots at her waist before extending around her hips at the top of her skirt.

Cate Blanchett also styled the item in a new way, using the harness to create a bodice for her pleated yellow gown. Her version featured a halter design that moved over her shoulder and into a demi cup bra-like top connecting to the floor-length skirt and voluminous fan sleeves.

Blanchett and Washington's harnesses mark not just a new trend for the 2020 awards season, but also a glam takeover of the look that's different from its previous iterations.

In 2019, men dominated the harness trend on the red carpet, with stars like Timothee Chalamet, Terry Crews, and Michael B. Jordan all wearing the style, often made of leather and hardware (with the exception of Jordan's floral number).

The ladies' harnesses join other potential awards-season trends that emerged on Sunday night. Puffy sleeves were a major red carpet statement, sported on everyone from The Crown's Olivia Colman to Dakota Fanning. Of course, there's the perennially popular sheer dresses, and there was no shortage of black gowns to choose from.

Although the 2020s awards season is just kicking off, harnesses could be strapped in and on trend on carpets to come.