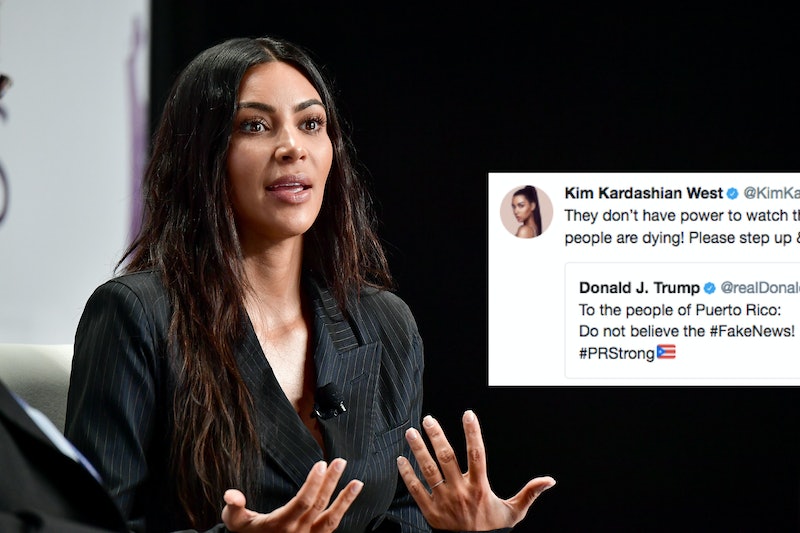 If you hopped on Twitter Saturday morning, chances are you saw a stream of tweets from or about Donald Trump. The president used his platform to criticize the leaders of Puerto Rico, who are currently recovering from the devastation of Hurricane Maria. And Kim Kardashian shut down Trump's Puerto Rico tweets with a single message that will leave you nodding your head in agreement.

After Trump posted, "To the people of Puerto Rico: Do not believe the #FakeNews! #PRStrong," Kardashian set the record straight. She prioritized what really matters here, reminding the president of the U.S. that people still don't even have power and need more than hashtags to help. Kim K wrote,

"They don’t have power to watch the news!!! Please stop tweeting & golfing while people are dying! Please step up & help!"

Ever since the hurricane struck Puerto Rico, Trump has been criticized for what's been viewed as delayed assistance and a lack of sympathy. For instance, it took days to waive the Jones Act, a law that limits shipping to the island. And though first responders and military have since been sent to Puerto Rico (and Trump himself is expected to go there on Tuesday), that wasn't without receiving backlash along the way, including from the mayor of San Juan, Carmen Yulín Cruz.

According to The Guardian, Cruz pleaded for Trump's assistance in a press conference on Friday. She said, "So, Mr. Trump, I am begging you to take charge and save lives. After all, that is one of the founding principles of the United States of … America. If not, the world will see how we are treated not as second-class citizens but as animals that can be disposed of. Enough is enough." Meanwhile, Cruz has been photographed wading through sewage waters with a bullhorn to search for victims still trapped in their homes, showing what leadership and taking action really look like.

Trump was not pleased with the criticism, calling out Cruz on Twitter on Saturday, writing, "Such poor leadership ability by the Mayor of San Juan, and others in Puerto Rico, who are not able to get their workers to help. They want everything to be done for them when it should be a community effort." He seemingly shifted the blame to the hurricane victims, which isn't even the first time he did so.

Earlier this week, he tweeted, "Puerto Rico, which was already suffering from broken infrastructure & massive debt, is in deep trouble," which feels unfair to insult the territory in their time of need. According to CNN, millions of people in Puerto Rico are still without water or electricity. CNN also reported that at least 16 people have died from what they've deemed a "humanitarian crisis."

After reading his tweets, it's hard not to argue that the president seems more focused on how he's portrayed in the media above all else. Trump even addressed the people of Puerto Rico directly, and instead of wishing them well, he focused on making sure they didn't believe #FakeNews — all while failing to realize that people without electricity will not see his tweet to begin with.

That's exactly why Kardashian's response to Trump is so on point. She focuses on what really matters: helping those in need. And before you dismiss Kim K as a reality star, is that not an accurate description for the president too? Between Keeping Up With The Kardashians and The Apprentice, they both have a track record of starring on reality television. Yet that doesn't take away the impact either of them can have on today's society — in very different ways, to be fair.

Kardashian has a major platform, with nearly 56 million followers on Twitter alone, and she uses that space to speak out about everything from rumors surrounding her family to more serious topics, like the Black Lives Matter movement to gun control. She also recently announced on Instagram that she'd donate proceeds from her Vogue Mexico cover to relief efforts for the earthquakes in Mexico, while encouraging her fans to do the same.

It's also worth noting that, along with her sisters and mother, Kardashian donated $500,000 to hurricane relief in Houston at the end of August. She tweeted, "Houston we are praying for you! My mom, sisters & I will be donating $500,000 to @redcross and @salvationarmyus today #HoustonStrong," and suggested her millions of followers give back in whatever way they can.

There's a distinct difference between tweeting about a problem, and actually doing something about it. Kardashian has consistently put her money where her mouth is, and it'd be nice to see the president do the same.

Editor's Note: A previous version of this story incorrectly referred to Puerto Rico as a country, instead of a territory. It has since been updated.