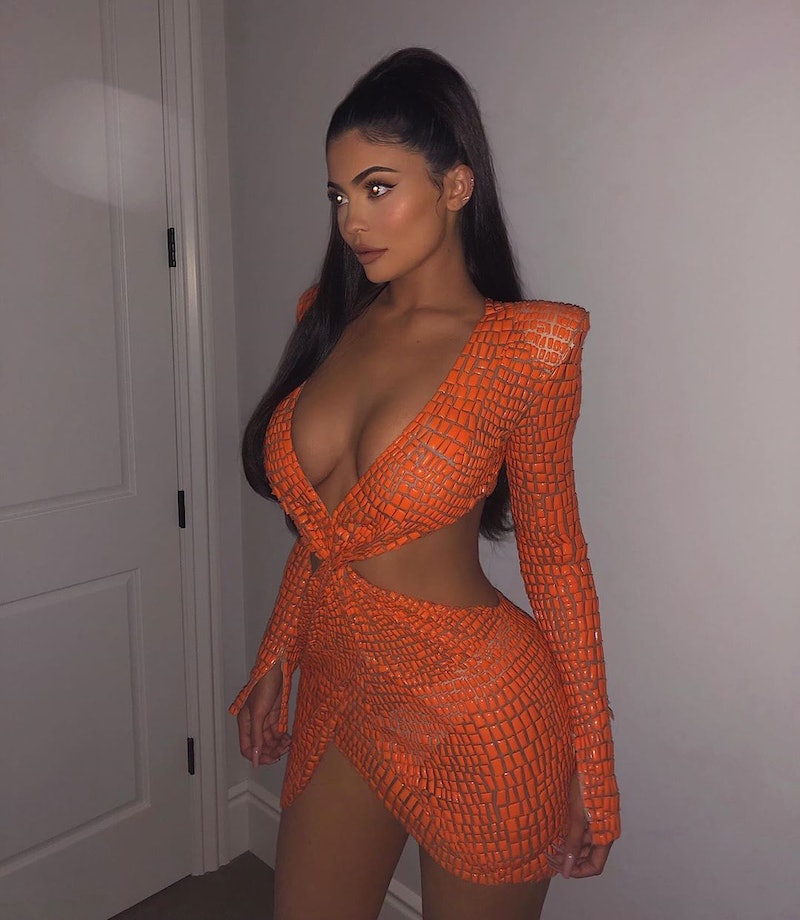 Kylie Jenner/Instagram
By Shea Simmons
May 28, 2019

When it comes to daring looks, no celebrities are more willing to really go there than the Kardashians and Jenners. Whether its outfits for major events like the Met Gala or just looks for Instagram posts, these sisters can rock basically everything. Now, Kylie Jenner's sheer orange crocodile dress is proving that summer's biggest trend is neon hues, and she's going to rock it.

On Monday, Jenner took to her Instagram account to showcase her latest look, and not only was she crushing the naked dress look (a trend common amongst her family members), she added a fun summer twist because the dress was neon orange.

The frock by Julien MacDonald is actually made of neon orange beads, though, not crocodile as the pattern would suggest. While the dress may have long sleeves, don't be fooled. It's also got a plunging v-neckline, massive cut-outs on the side and back, and a rising hemline. According to Harper's Bazaar, while the material for the dress may be barely there, the price tag isn't. Jenner's orange naked dress costs almost $17,000. Yes, it's basically the cost of a car.

Apparently, Jenner wasn't the only member of the family who was into the neon naked dress, though. Her sister, Khloe Kardashian commented on the photo writing, "You never disappoint!!!!!" with four drooling emojis. Could Khloe Kardashian be working a trendy neon naked look next? She's rocked the naked look in the past, but for now, Jenner has taken on the mantle of reworking the naked dress in a new, trendy way.

It's hard to deny how good this look is, especially with that gorgeous Ariana Grande-esque ponytail.

While the neon trend for the summer didn't start with Jenner, it did kind of begin at an event she attended. During the 2019 Met Gala, celebrities embraced the Camp theme they were given, there was another theme that seemed to arise as well: neon.

From the beginning of the night, neon pink was the dominant trend among attendees, and who better to begin the trend than one of the hosts? Lady Gaga was the first to appear on the Met Gala red carpet, and she did so wearing not just one but a whopping four looks from designer Brandon Maxwell.

Of the four looks, her first ensemble was basically a massive hot pink coat dress that billowed our over the pink carpet. The dress was eventually removed to reveal a black frock beneath, but Gaga didn't stop there. She then moved on to a Barbie-esque, hot pink column dress before stripping down to a black lingerie set.

The singer was far from alone in her color choice, though. Singer Kacey Musgraves also gave fans a hot pink, Barbie-inspired look courtesy of Moschino.

Of course, who could forget Janelle Monae's next level camp look complete with a half, hot pink column skirt and pink accented hats? She does have a song called "Pynk" after all.

While not pink, even Jenner's older sister Kendall Jenner got in on the neon trend. She rocked a extravagant neon orange look a la Kylie's very own naked dress.

Given that the Met Gala is often referred to as fashion's biggest night, the even is certainly the best place for a trend to start. It seems as though Jenner embracing the neon look for summer, and she looks damn good doing it.