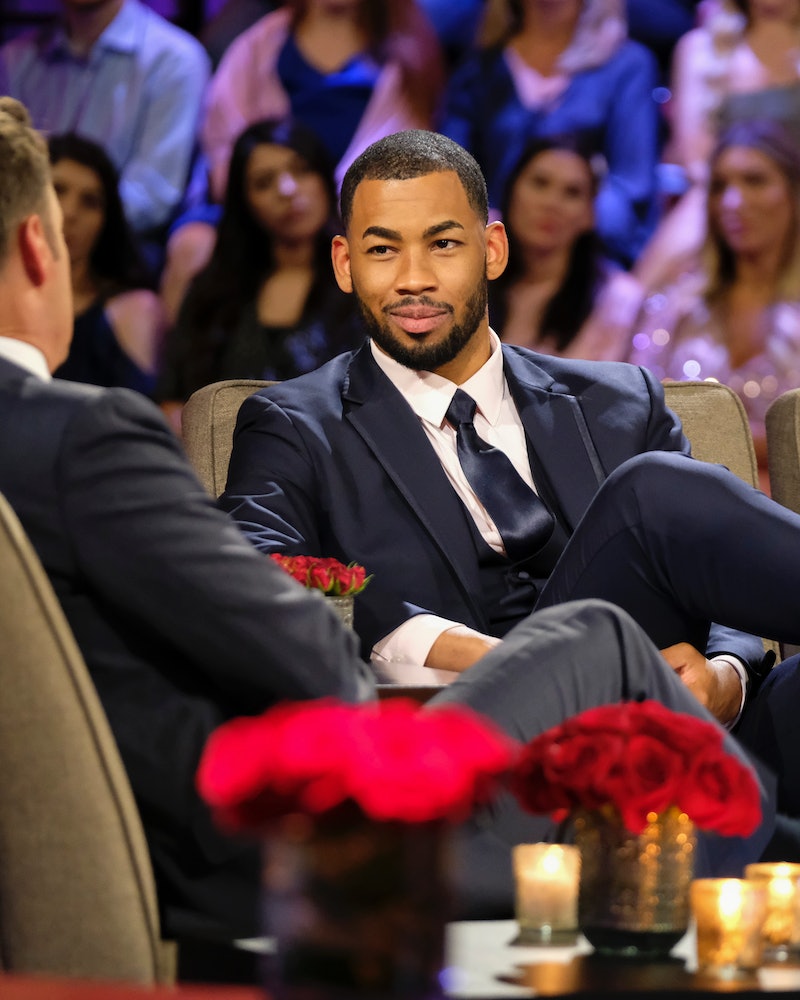 Mike Johnson was the king of eye rolls during the Bachelor in Paradise reunion and it wasn't just because of all the Jordan and Christian drama. As he told Rachel Lindsay on the Bachelor Happy Hour podcast, Mike found out he wasn't the next Bachelor right before going on stage for the Paradise reunion. At the aftershow, Peter Weber was announced as the Bachelor. But, as Mike revealed during his chat with Rachel, he had been in the running for the role up until that very night — and he was not pleased when he found out he had been passed up.

Rachel, who made Bachelor Nation history as the first black Bachelorette, has been a huge fan of Mike for Bachelor, so she made sure to grill him on what really went down behind the scenes of ABC's decision. "I 100 percent wanted to be the Bachelor," Mike said, putting any doubt to rest. "Reasons being because 1, I do want to find a wife. 2, It was bigger than me and I wanted to represent for all people of color."

Knowing that Mike wanted the role and didn't turn it down (you know, to do something like date Demi Lovato) is a total blow for people who wanted him as the lead. But what might make Mike fans fume even more is how he found out he wouldn't be the Bachelor. He spilled to Rachel that the producers told him the bad news "right before going onstage" for the Paradise reunion. Considering he was also upset that many of his storylines were cut from Bachelor in Paradise (for instance, how he and Sydney ended things), Mike looked irritated at the aftershow because he was. "I just didn't want to be there at all," Mike said.

"I'm not gonna lie, I was sad. I was annoyed when I very first found out," Mike said about the rejection. But then, just further demonstrating why he would make such an excellent Bachelor, Mike added how he quickly accepted the news and was ready to move on. "I think by the end of the night, I wasn't annoyed no more because I was appreciative and thankful that they told me no right then and there. Because now I could focus on myself, and I'm just blessed 'cause I know I'm gonna find my wife and find my queen."

Speaking of his queen, Mike also confirmed again that he and Demi Lovato have been hanging out. "When Demi and I are together, it's laughter and we talk about real sh*t. She's a down-to-earth woman and I respect it so much," Mike said. He left their relationship status simply as "two people exploring each other."

Things certainly seem to be working out for Mike even without the Bachelor title. Yet, that doesn't mean the franchise still doesn't have a major diversity problem — something Mike and Rachel know about firsthand. Mike told Rachel that in his interviews for the Bachelor, he made it clear to producers that he "wanted to be representative of America as far as the women that would be on the show if I were to be cast as the Bachelor" — and he said that the show needs to focus on "other people outside of just black and white" as well. (As Mike did note, Peter's mom is Cuban.) "I think ultimately, it came down to they chose the right person for what they want and there's nothing wrong with that at all," Mike reasoned.

While that may be true, it was disappointing for many fans that The Bachelor didn't choose to embrace more diversity in a significant way. And even though Mike doesn't have anything against the franchise or Peter, he did cheekily admit, "I think I would have been more entertaining." And that's that.

More like this
Laura Tott From 'First Dates' Married Her Long-Term Mystery Boyfriend
By Darshita Goyal
Where Is Clayton Echard Now? The Former 'Bachelor' Star Is Dating Susie Evans
By Kadin Burnett
Here's Our Ranking Of The Funniest 'Bachelor' Casting Ad One-Liners So Far
By Grace Wehniainen
Why Did Meatball Leave 'The Bachelorette'? His Second Chance Didn’t Last Too Long
By Grace Wehniainen
Get Even More From Bustle — Sign Up For The Newsletter