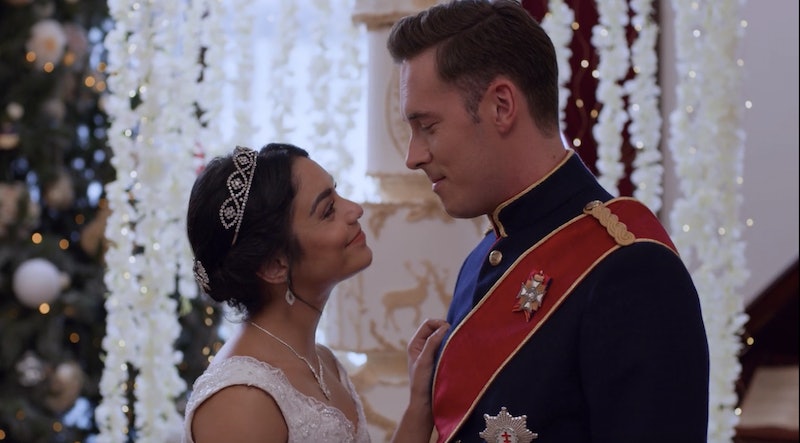 It may seem like there are an awful lot of royal holiday celebrations on Netflix this year, and there's a reason for that. After several successful movies, Netflix went all in on royal narratives this holiday season, and the trend is likely to continue. It began last year with the premiere of A Christmas Prince, a movie about a young journalist named Amber who is sent abroad to get the scoop on a prince who is about to assume the throne in the fictional nation of Aldovia. Spoiler: the two fall in love, and Amber is put on course to become royalty. The film is not the first to use the commoner to royal plot device, and if this year's batch of Netflix holiday films, from the A Christmas Prince sequel to The Princess Switch, are any indication, there will be many more.

If there is a spiritual predecessor to these holiday films, it's The Princess Diaries, even if it doesn't have much to do with Christmas at all. In 2001, The Princess Diaries was a major hit, and it grossed over 165 million worldwide — triple its production costs. The film is based on Meg Cabot's young adult novel of the same name, and follows a shy teenager named Mia Thermopolis in San Francisco. Mia finds out she's the heir to the throne in the foreign, very nonexistent country of Genovia. The contemporary fascination with royalty has been around long before The Princess Diaries, but the teen movie appears to be responsible for making this particular narrative device popular in the modern era.

A Christmas Prince was a sleeper hit for Netflix, despite being panned or ignored by critics. There's evidence the film developed a cult following similar to the phenomenon of The Kissing Booth. Despite the lack of reviews, there are plenty of think pieces about what makes A Christmas Prince so addictive. The movie may hit the usual royal rom-com beats, but viewers are unfazed by the predictability and plot holes. In fact, the absurd and wildly inconsistent plot might even be part of the draw. A Christmas Prince knows it doesn't have Julie Andrews and a Disney budget to make the fictional monarchy more believable, so it doesn't try to.

Netflix doesn't release viewership data, but the streamer dropped a major hint that the film had a significant following. In 2017, Netflix tweeted: "To the 53 people who've watched A Christmas Prince every day for the past 18 days: Who hurt you?". The tweet was controversial, but it did allow Netflix to wink at that the movie's devoted following without releasing any formal statistics.

This year, the streaming platform's growing roster of original holiday content includes plenty of royal stories. In November, The Princess Switch premiered. The plot follows baker Stacey DeNovo, played by Vanessa Hudgens, who visits the fictional country of Belgravia and decides to trade places with Lady Margaret, also played by, you guessed it, Hudgens with an accent.

Additionally, there is the A Christmas Prince sequel, A Christmas Prince: A Royal Wedding. And on Dec. 17, a series titled The Prince of Preoria: A Christmas Moose Miracle premieres. The streaming platform does not seem to be slowing down the production of these regal Christmas movies, and this could be in part because, for all the faux-royal extravagance, they are pretty cheap to make.

A Christmas Prince and The Princess Switch movies look like they could find a home on the Hallmark Channel, which is not a coincidence. The Hallmark Channel has been a prime destination for holiday movies for years, and Netflix is en route to challenge the network. It's not possible to know the budget for a movie like A Christmas Prince, since Netflix doesn't release production information of this sort. However, given the movie's generous use of establishing shots, green screen, and the fact that the royal palace is essentially a ski lodge with craft store decor, it isn't likely to be too costly. The production cost was likely on par with the average Hallmark holiday movie budget which is about 2 million, according to The Marketplace.

Netflix seems to realize movies like A Christmas Prince and The Princess Switch are appealing not despite their low-budget feel and camp, but because of it. The Princess Switch leans into the unbelievability, and it almost feels like the producers embraced the movie's cheesiness. The plot holes are even more brazen — there's a magical old man whose only power seems to be summoning ex-boyfriends, and a pointless villain in several scenes who feels like an afterthought.

The cheap production costs and cult appeal of these movies are definitely responsible in part for the surge in royal narratives, but Meghan Markle and Prince Harry's real-life relationship could also be a culprit. Markle is an unexpected addition to the royal family: she's an American actor and activist from humble beginnings. Prince Harry and Markle's whirlwind romance is as close to the story in The Princess Diaries that the real world may ever get.

Netflix seems to realize that there's overlap in fans of the royals and viewers of their princess movies. In fact, A Christmas Prince: A Royal Wedding lifts a storyline straight from Markle's life. In 2017, amidst engagement rumors, Markle shuttered her blog and lifestyle brand The Tig. The decision foreshadowed the marriage, as the star likely closed the site down for the sake of privacy. In A Christmas Prince: A Royal Wedding, Amber clashes with the Aldovian royals over her own popular blog.

There has long been a fascination with the British monarchy, but Markle's real-life fairy tale gave the story in The Princess Diaries new relevance. It won't be surprising if the royal wedding and Markle's first few years in Kensington Palace end up providing even more material for the screenwriters behind the Netflix holiday movie machine. It's a formula that seems to work, and fans are on board, no matter how ridiculous the scenery or plot points.

Given this trend, fans can expect to see more movies about unexpected princesses in made-up countries with names like Anchovia or Grandovenia. It's clear that royalty and the holidays are a match made in low budget movie heaven. Now the big question is how much longer Netflix can find new ways to introduce commoners into fictional monarchies just in time for Christmas.