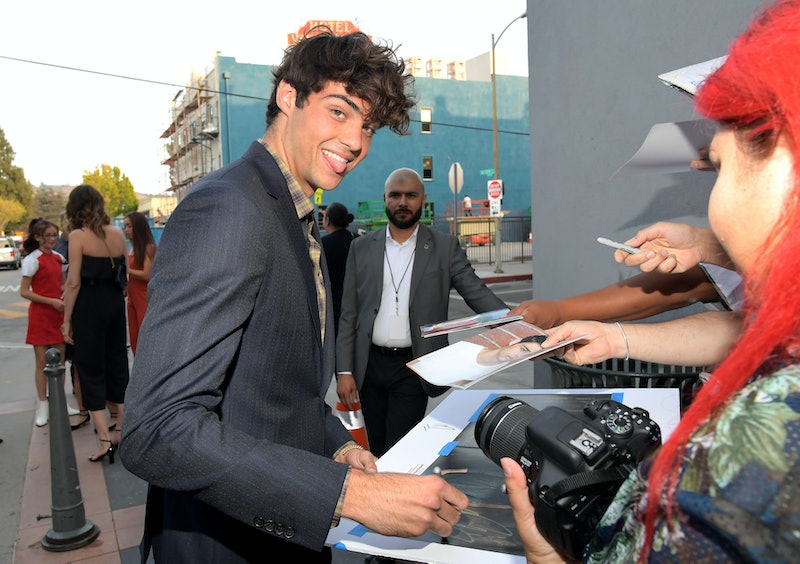 As soon as To All The Boys I've Loved Before hit Netflix, the internet fell in love with Lara Jean Song Covey's fake boyfriend-turned-real boyfriend, Peter Kavinsky. In amazing news, it turns out that the actor Noah Centineo is Peter Kavinsky IRL — and a perfect detail from the movie proves it.

The Twitter account @SeeWhat'sNext, which documents new and up-and-coming Netflix projects, caught wind of how much the internet gushed over the popcorn fight scene with Lara Jean's younger sister Kitty. On August 22, the account did what no one even thought was possible: They found a way to make fans fall in love with Peter Kavinsky even more.

If you've already forgotten, there's a scene where Peter, Lara Jean, and Kitty are watching a movie, and Peter and Kitty end up having a pillow fight. As the fight picks up, Peter — like the angel he is — wordlessly moves the bowl of popcorn off of the couch, placing it gently places onto the ground. It's a move that ensured that the popcorn wouldn't be wrecked by the goofy fight and that no additional cleanup would be required. It's thoughtful and sweet — the type of gesture that demonstrates what type of person Peter really is. The small and subtle moment quickly became a fan favorite, with people tweeting about it as proof that Peter really was the one. And now, thanks to See What's Next, fans now know that the moment was totally improvised by Centineo.

To clarify, the precious moment that captivated the hearts of many Twitter users — an early moment that pointed to PK's inherent goodness — was not a stage direction written in the script. Centineo improvised it in the moment while shooting, because Peter is perfect and the actor is perfect and would that he had enough older siblings to date everyone online. Had Lara Jean noticed the moment within the world of the film, she likely would have fallen head-over-heels for Peter before the night was over. It makes sense that the film's fans would swoon over it, too, but finding out the impossibly cute Centineo did it all on his own just adds an extra chef's kiss to the moment.

If that's not enough to convince you that Centineo really is the real life Peter Kavinsky, then maye the news that the actor is set to play an equally lovable fauxmantic interest in upcoming Netflix film Sierra Burgess is A Loser will. The trailer looks like a clever high school rom-com that's likely a twist on the classic Cyrano de Bergerac. After his role on The Fosters, brief kiss with Camila Cabello in the "Havana" video, and heart-stopping character in To All The Boys I've Loved Before, Centineo seems poised for a major breakout moment.

So, congratulations to Centineo for dethroning Timothée Chalamet as current Generation Z Internet Boyfriend, and a massive thank you to the See What's Next account for divulging this absolutely blissful peace of information. Is it too early to plan a "Peter Kavinsky" and "bowl of popcorn" couples costume for Halloween this year?

More like this
Jennifer Coolidge Just Said The Most Controversial Thing About Legally Blonde’s “Bend & Snap”
By Maxine Harrison
Revisit 1992’s 'A League Of Their Own Cast' Photos After The New TV Series
By Grace Wehniainen
At 28, Lesley Manville Was Acting, Picketing, & Singing Kate Bush Songs
By Olivia-Anne Cleary
Here’s Where Manti Te’o Is Now
By Arya Roshanian
Get Even More From Bustle — Sign Up For The Newsletter