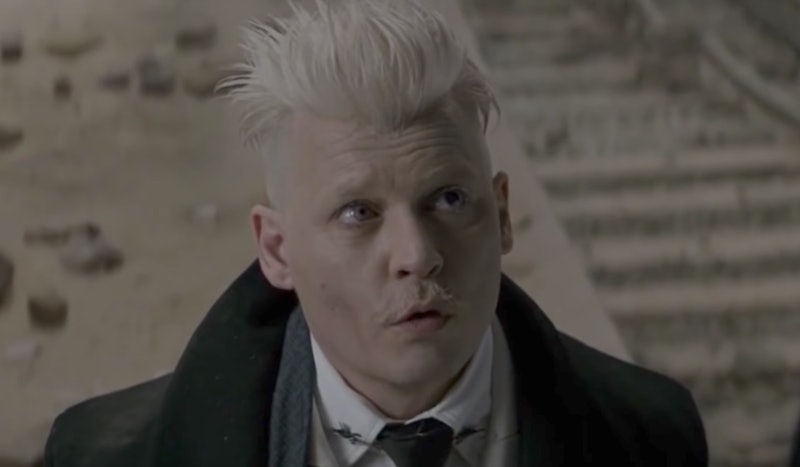 The news that Johnny Depp will star in the next Fantastic Beasts movie caused a year's long uproar on social media. Harry Potter fans protested the controversial actor's involvement, wishing they could use Hermione's time-turner to go back and undo that casting decision. Now, the Fantastic Beasts director David Yates defended Depp in an interview with Entertainment Weekly, calling it a "dead issue." While confirming that Depp will remain as the villainous titular character, Gellert Grindelwald, in Fantastic Beasts: The Crimes of Grindelwald, Yates also came to his defense. "I can only tell you about the man I see every day: He’s full of decency and kindness, and that’s all I see," Yates said.

For many fans, Depp has no place in Harry Potter's wizarding world, as the actor's ex-wife, Amber Heard, accused him of committing domestic violence in 2016 while the couple was divorcing. Depp ended up agreeing to a $7 million settlement. A joint statement released to TMZ by the two actors claimed that Heard planned to donate the money to charity and that "there was never an intent of physical or emotional harm." Heard's allegations turned many Depp-heads into Depp-haters, and rightly so. Sadly, Yates suggested that one person's accusations against Depp aren't enough to impact the actor's work.

"Honestly, there’s an issue at the moment where there’s a lot of people being accused of things, they’re being accused by multiple victims, and it’s compelling and frightening. With Johnny, it seems to me there was one person who took a pop at him and claimed something."

Yates' statement alludes to the multitude of sexual harassment claims recently made against public figures, both in the entertainment industry and political realms, but to suggest that Depp's alleged assault is somehow less important than the others because only one woman came forward completely misses the point.

Continuing to dismiss women's isolated claims that a person committed any kind of abuse only allows men like Harvey Weinstein to get away with their alleged crimes until finally enough women gather together to publicly claim that someone assaulted them. If a group of women is to be believed, then a single woman also needs to be believed, as every single instance of assault is equally deserving of an investigation. For Yates to say that Heard — ironically — "took a pop at him and claimed something," suggests that her claims were both false and trivial.

But wait, it gets worse. As if taking a wand and proclaiming "stupefy," Yates went on to defend Depp by suggesting that he doesn't believe Heard's accusations against his friend. "By testament, some of the women in [Depp’s] life have said the same thing — ‘that’s not the human being we know,'" Yates said, sounding like the 36 female cast members of SNL who wrote a letter defending Al Franken amidst claims that the senator committed sexual misconduct. On Sunday, Franken responded to the four accusations of sexual misconduct made against him, saying he felt "embarrassed" and "ashamed," according to The Washington Post. Franken added, "We have to listen to women and respect what they say."

Yates, on the other hand, suggested that listening to the women protesting Depp's involvement in the Fantastics Beasts sequel is not necessary. “It’s very different [than cases] where there are multiple accusers over many years that need to be examined and we need to reflect on our industry that allows that to roll on year in and year out. Johnny isn’t in that category in any shape or form," the director told EW. "[T]o me, it doesn’t bear any more analysis," Yates added.

Just because Depp doesn't fit the "category" of men in Hollywood with multiple accusers of assault doesn't mean that he is innocent. It would have been one thing if Yates had acknowledged the gravity of Depp's alleged behavior, but instead he echoed the tune frequently sung by friends of men who have been accused of assaulting women, and it doesn't sound good.

For many fans of Harry Potter, the news that someone accused of domestic abuse will join their beloved fictional world could ruin the magic. The fact that the director of the series hasn't shown any empathy to the backlash will likely only turn fans further away from the upcoming installment, set to hit theaters Nov. 16, 2018. Hopefully before then, fans will get some acknowledgement that their disapproval of Depp was received.

More like this
Sadly, 'Fantastic Beasts: The Secrets Of Dumbledore' Isn’t Streaming — Yet
By Arya Roshanian
Shocked Fans & Former Co-Stars React To Ray Liotta’s Death At 67
By Grace Wehniainen
Laura Dern Said “Cultural Awareness” Made Her Rethink This 'Jurassic Park' Fact
By Grace Wehniainen
'Doctor Who’s New Star Is Already Huge On TikTok
By Maxine Harrison
Get Even More From Bustle — Sign Up For The Newsletter