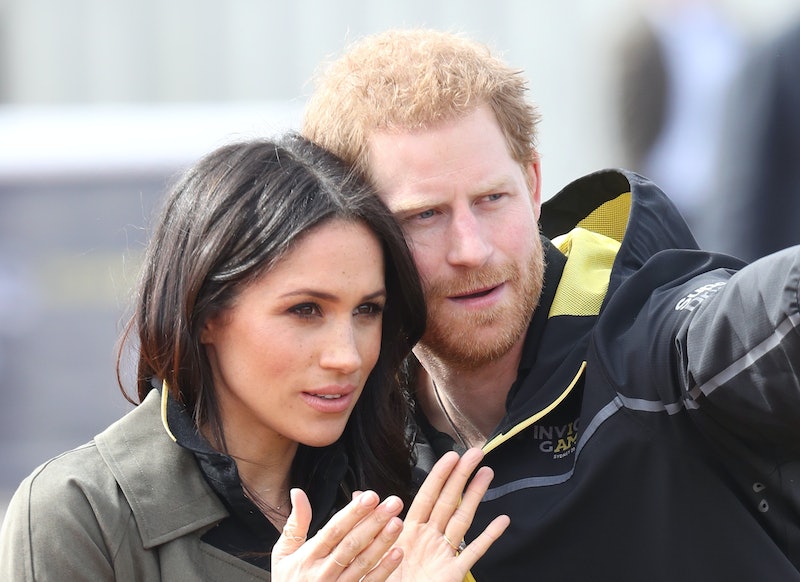 I didn't know cake could be such a big deal until Prince Harry and Meghan Markle got engaged. Much speculation surrounded whether they'd go with the traditional fruitcake or be rebels and do something totally out of the ordinary. Somewhere along the line, we were all convinced they'd have a banana wedding cake, and then Kensington Palace confirmed the couple had hired pastry chef Claire Ptak to make them a lemon elderflower cake. I think that's the first time most of us have heard of this flavor combination, so I have to ask: what does the royal wedding cake flavor mean?

We can start with Kensington Palace's tweet, which explains the cake "will incorporate the bright flavours of spring" and will be decorated with fresh florals. KP also shared Ptak likes to bake with seasonal and organic ingredients, which would explain the appeal to Markle, who's quite the conscious gal. It stands to reason one explanation behind the choice in flavor is its freshness, natural availability, and eco-friendliness. Plus, it pays tribute to the season.

But what does it all mean? Like... really mean?

Let's start with elderflowers. Elderflowers are found throughout the United Kingdom and grow from late May to early June, says Chatelaine.

Curious about the meaning of the elderflower, I attempted to hunt down more about its history and what it symbolizes, finding it's not as straightforward as the red rose of love. The Goddess Tree says the elder tree signals beginnings and endings, birth and death. It's about experiencing a transformation and "the crossing of thresholds." Quite fitting for a powerful couple about to close one chapter of their lives, start a new one together, and take over the world, yes?

Sacred Earth shares more about the mythology and folklore behind the elderflower. In Denmark, Hylde Moer was a goddess whom the elder tree was sacred to. The vegetation was considered her blessing, and people who took care of the plants and showed them respect would be protected in return. They would even protect your home if you planted them around it. Historically, people have pinned elder leaves to their door to fend off any negative or toxic energies.

Interestingly, Sacred Earth notes, in Serbia, elder twigs were thought to bring good luck to newlyweds if they were incorporated in the wedding ceremony. Coincidence? Maybe, maybe not.

The elderflower's reputation spans far beyond it's ability to protect and bring good luck.

Herb Wisdom explains its many health and medicinal benefits. It has antiseptic and anti-inflammatory properties and can be used for colds, the flu, sinus infections, and other respiratory problems. Elderflower can supposedly behave similar to insulin and reduce blood sugar levels. It might help relieve constipation, and is both antibacterial and antiviral, helping to fight allergies and strengthen the immune system. You can even use it in mouthwash. When applied topically, it can help fight pain and swelling in the joints, and has even been used to stop bleeding and combat MRSA.

While the elderflower's history may not be common knowledge today, the taste is quite refreshing and we enjoy making desserts, teas, and other beverages with it.

Lemons are quite powerful in their own right. They have also been known to fight negative energies, says Spiritual Unite, and the bright color is symbolic of happiness and positivity. The ancient Romans loved keeping lemons around as an ornamental plant, and Greek and Roman mythology say Hera — the bride of Zeus — loved them so much, she hid them in a garden, guarded by nymphs, according to Cinque Terre.

Lemons, along with oranges, have stood for richness and love, notes Greekalicious, and they could even bring you good dreams, if you put dried lemon leaves in your pillow before bedtime.

Here's where it gets even more interesting: the Greeks saw it as a "donor of the immortality," says Mundo Sol, and it was symbolic of fertility. Thus, lemons were a common staple in wedding ceremonies. (Does this mean royal babies are in our near future???)

Once again, we're seeing powerful healing properties in lemons, just like we did with the elder plant. Medical News Today says explorers used to take lemons with them on their voyages because they helped prevent and treat scurvy, a disease common amongst sailors due to a vitamin C deficiency. (Lemons are packed with it.) The C in lemons is an antioxidant and needed to produce collagen in the human body. It might even help alleviate asthma and protect against cancer.

So, now comes the big question of the day: did Prince Harry and Meghan Markle choose a lemon elderflower cake because they believe it will protect them from negative energy, bring them love and happiness and good luck, give them a dose of vitamin C, bring them good dreams, and help them grow a big family? Did they want to honor the season and their home, choose all-natural ingredients, and pay tribute to Mother Earth?

Or did they just do a cake tasting and go, "Oh this one tastes good!"?

Tradition is huge across the pond, which helps explain the whole fruitcake thing. While we don't know for certain, there's a solid likelihood there is at least some meaning behind the couple's flavor pick — at the very least, that elderflowers are specific to the area.

We all know that baking a royal wedding cake is no small task, and they always end up being extravagant. With Ptak as the chef and a dash of the "Markle sparkle," there's no doubt this cake will be a winner.

More like this
Dolly Parton Released 4 New Baking Mixes With Duncan Hines
By Alexis Morillo
An Expert Weighs In On The Viral Raw Carrot Salad Trend
By Alexis Morillo
16 Trader Joe's Appetizers That Are Total Party-Pleasers
By Kaitlyn Wylde
Do Green Powders Work As Well As TikTok Says They Do?
By Carolyn Steber
Get Even More From Bustle — Sign Up For The Newsletter
From hair trends to relationship advice, our daily newsletter has everything you need to sound like a person who’s on TikTok, even if you aren’t.