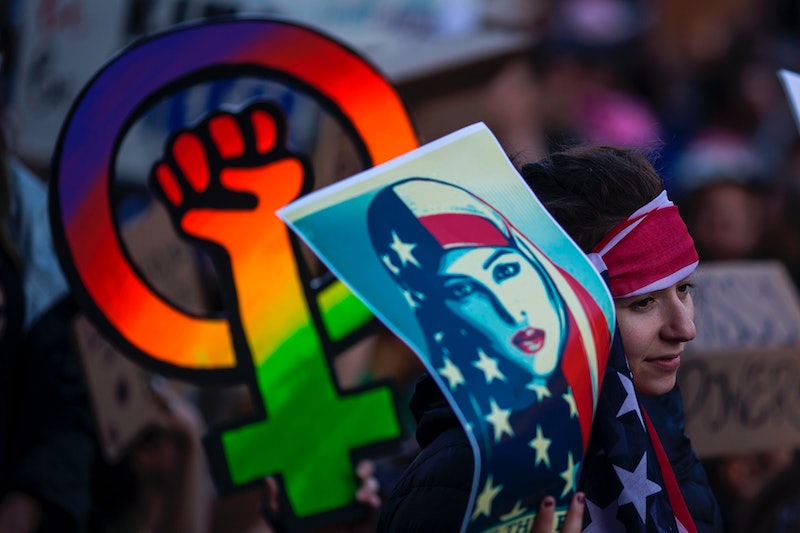 Every year since 1971, we celebrate Women’s Equality Day on August 26. The day commemorates the anniversary of the adoption of the 19th Amendment to the U.S. constitution. Setting aside a day to celebrate women's equality in general (and American women's hard-earned right to vote in particular) is rad — but what I think would be even better is if women actually had equal rights in the United States and abroad. It'd be almost as great, too, if people would stop saying that women’s equality isn’t an issue anymore. Because no matter what your Uncle Meninist says on Facebook, equal rights for women have yet to be achieved.

In fact, with the notable exception of American women's right to vote, there's actually nothing in the U.S. Constitution that expressly prohibits sex-based discrimination. This is made even more frustrating when you consider that the Equal Rights Amendment — which was first proposed by the National Women's Political Party in 1923 — was actually passed by Congress all the way back in 1972. The amendment was meant to guarantee legal equality of the sexes and prohibit discrimination on the basis of sex, but 14 states still haven't ratified it.

These are just a few of things people who deny the issue of women’s equality need to be informed about. So the next time you hear someone claim that gender equality is already a thing, this is what you can say to them to make sure they know what's up.

Texas Governor Greg Abott recently signed a bill that will require women to pay a separate health insurance premium to cover "non-emergency" abortions — even in the case of rape or incest. So basically, Texas women are now expected to purchase "rape insurance" just in case they might need to terminate a forced or unplanned pregnancy sometime in the future. Texas isn't the only state with a law like this one, either. North Dakota, Idaho, Kentucky, Missouri, Kansas, Nebraska, and Oklahoma have similar laws on the books. What's worse is, in countries like Nicaragua and Malta, abortion is illegal under all circumstances — even when an abortion might save a woman's life.

As long as governments worldwide continue to deny pregnant people their right to bodily autonomy, women's equality will still be an issue. So if you run into people who think women's equality is "in the bag," know that it's OK to tell them just how wrong they are.

Until North Carolina criminalized marital rape back in 1993, it was legal for American men to rape their wives. Hell, marital rape was still semi-legal in eight U.S. states as of April 2014. And in April of 2016, an Oklahoma court declared that state law doesn’t criminalize oral sex with a victim who is completely unconscious. What's perhaps even more surprising is that rape is still technically legal in North Carolina, where women have been legally unable to withdraw consent since 1979. That means that if a woman initially consents to sex, but then tells her partner to stop, it isn't considered rape if the partner continues — without consent.

As long as it is literally legal to rape women, women's equality will still be an issue. Don't be afraid to make this clear to anyone who's misinformed enough to think that women's equality is a done deal.

It's pretty impossible to pretend that women's equality isn't an issue once you know that equal pay for women isn't predicted until 2152. At least, it should be. So if you find yourself in a situation where the fight for women's equality is being minimized, consider bringing up the gender wage gap. As stated in the American Association of University Women's (AAUW) spring 2017 report, The Simple Truth About the Gender Pay Gap:

Women don't receive equal pay for equal work in the United States, and that's not expected to change for 135 years — but only for white women. White women only receive 78 cents for their male coworkers' dollar, but women of color face a far more drastic pay inequity. Black women only make 64 cents for every dollar a man makes, while Native Hawaiian and Pacific Islander women make 65 cents. Native American women only make 59 cents, but pay equity is very long off for Latinx women, who only receive 54 cents to their male coworker's dollar.

Equally important: According to the World Economic Forum, pay equity won't happen on a global scale for another 170 years. These are facts — so share them the next time you hear someone talking about "how great women have it" nowadays.

According to a 2016 poll, 80 percent of Americans think our constitution guarantees equal rights to men and women. That's simply not the case. Although the Equal Rights Amendment (ERA) was initially introduced to Congress all the way back in 1923 — then passed by Congress in 1972 — there's literally nothing in the U.S. constitution that expressly prohibits discrimination on the basis of sex. This is because only 36 states have ratified the ERA, and it takes 38 ratifications for an amendment to become part of the U.S. Constitution. For an amendment to be ratified, two-thirds of the House and Senate must approve of the proposal and send it to the states for a vote. Then, three-fourths of the states have to affirm that amendment for it to officially become part of our Constitution. Yet somehow, even though 94 percent of Americans actually support passing the ERA, three-fourths of our states haven't affirmed it. Until all 50 states ratify the ERA, women technically don't have equal rights in America.

When the reproductive rights of American women are steadily under attack, it is literally legal to sexually assault women here in the United States, and it's undeniable that American women are still economically disadvantaged, it simply isn't true that women's equality "isn't an issue anymore." Gender equity is not currently a reality in the United States, so the next time you hear someone trying to suggest otherwise, use these facts to set 'em straight.