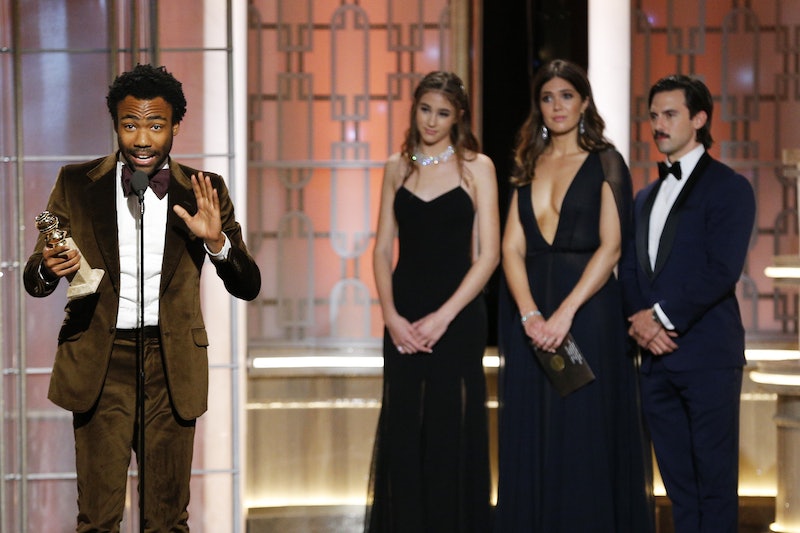 So much has happened in 2017, it's almost like a breathe of fresh air knowing that the year is coming to an end soon. But the new year vastly approaching also marks the beginning of awards season. If you're a entertainment fan wondering where to watch the 2018 Golden Globe nominations, you're totally not alone. Because trust... there are a slew of others waiting to see if their favorite programs, films and artists will get the recognition and accolades they all deserve.

In spite of the disappointing news hovering over the entertainment industry, 2017 served as a bit of resurgence of artists fighting to have marginalized stories and voices heard. From highly celebrated films like Jordan Peele's Get Out and Kumail Nanjiani's The Big Sick, to amazing performances from Girl's Trip's Tiffany Haddish and Insecure's Issa Rae (just to name a few), the list of contenders has the potential to be both action-packed and diverse — unlike the lack of diversity within the 2017 Golden Globes show. And if your faves are amongst the list of groundbreaking performances expected to be recognized, the 75th Annual Golden Globes will definitely be one award's show not to miss.

Also expected to be nominated in quite a few categories are Emmy award-winning and shows Big Little Lies, The Handmaid's Tale, and Master Of None, as well as musical and comedies Lady Bird and I, Tonya.

And though only having its pilot episode under its belt, Amy Sherman-Palladino's Amazon Prime comedy The Marvelous Mrs. Maisel is said to be a potential contender during the 2018 ceremony. If the predictions are spot on, stories about women and people of color will be leading the charge — making the upcoming Golden Globes show amazingly diverse.

Fans won't be able to catch the show until Jan. 7, but the wait to see just who and what will be in the running for an award is much shorter. According to Entertainment Weekly, the Golden Globe nominations will be announced Monday, Dec. 11. The exact location has yet to be confirmed, but if the 2017 Golden Globe nominations announcement sets any sort of precedent for its 2018 show, you can bet that a Facebook Live streaming link will become available. In Dec. 2016, fans from all over were able to catch the unveiling of the first set of categories via the social platform, moments before the remaining nominations were announced on NBC's Today.

Recently announced, however, is that late night host Seth Meyers is slated to emcee the televised event. Which also means that the comedian will have the hefty responsibility of tackling the many sexual assault allegations amongst his colleagues.

Of course, Meyers is expected to carry the night with an exhausting amount of humor, but seeing how the political commentator plans to weave the controversial news subject throughout the show will be quite interesting. And let's all hope Meyers is able to deliver on this better than Stephen Colbert's failed attempt of making light of Sean Spicer's unprofessionalism during the 2017 Emmy Awards show.

In terms of the actual accolades, the Golden Globes is said to set the tone for the Oscars. And with the 2016 #OscarsSoWhite backlash still in conversation, many will certainly be paying close attention to the amount of diversity and inclusion within the 2018 Golden Globes nominees. And frankly, when observing the amount of groundbreaking entertainment presented in 2017, the Hollywood Foreign Press Association (HFPA) doesn't really have a choice but to recognize many of the marginalized stories steering progressive conversations amongst viewers.

The Dec. 11 announcement will show just how in-touch the industry's gate-keepers are. Here's to hoping the list of 2018 nominees represents the amount of fresh and notable content showcased.