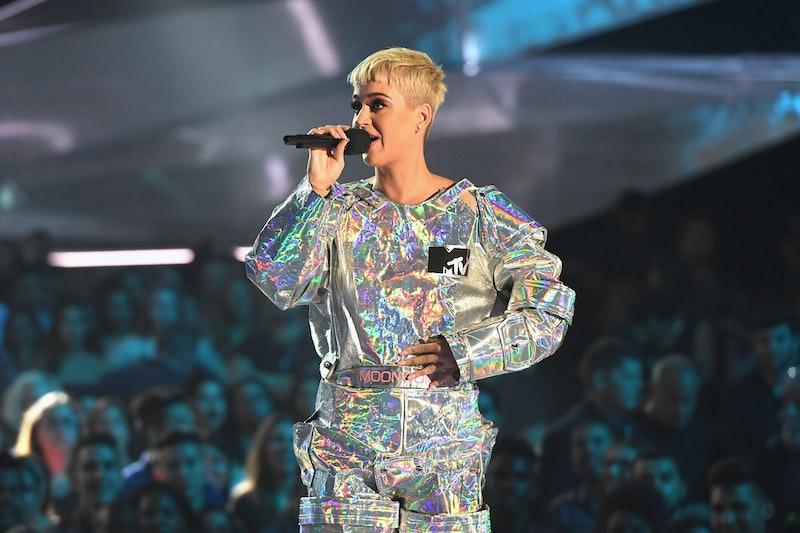 MTV first launched their Video Music Awards back in 1984. Almost every year since then, some sort of big-name celebrity has taken on the main microphone duties for the night, so fans might be wondering who's hosting the 2018 MTV VMAs. Well, as it turns out, there won't be a host at all — but there's a totally fair reason why.

At the VMAs Press Junket on Friday, executive producer Bruce Gillmer confirmed to Bustle that no one is emceeing the big night. Yes, there will be presenters and performances, but no formal host. "This year we opted for a tighter show," Gillmer explained. "We want to let the music do the talking a little bit more. We love having a host, if it's somebody that is pin-point and dead-on for what we're looking for."

"We're just as happy [not having a host], and by the way, the show is just as vibrant, just as successful with or without," Gillmer told Bustle. "So this year, we're happy that we have all the music that we have. The music will speak for itself."

In terms of who'll be taking the stage, fans will get to see a bunch of their favorite musicians performing. In a press release from Aug. 2, MTV revealed that Ariana Grande will be singing "God Is A Woman," Shawn Mendes will perform "In My Blood," and Logic will deliver "One Day" featuring Ryan Tedder from One Republic.

A few days later, the network announced that Nicki Minaj will be performing a medley of her new songs from "an iconic New York location," and that Travis Scott and Post Malone will take the stage for a mash-up of tracks from Scott's recently-released Astroworld as well. Oh, and Jennifer Lopez — who's receiving this year's Vanguard Award — will be performing, of course.

As if all of that wasn't exciting enough, the network announced this week that Cardi B will open the 2018 VMAs. While Gillmer couldn't confirm whether Cardi will perform (and it doesn't seem likely based on the rapper's recent Instagram), he did say that she'll be in attendance. The executive producer said, "[Cardi B] is coming to the show. She is going to surprise everybody... I really don't want to say, because it's one of those moments that we're trying to preserve some level of mystique."

Cardi has been laying low since giving birth to baby Kulture back in July, so even if she doesn't actually perform, there's certainly a lot to look forward to at this year's VMAs. And as pointed out above, there are plenty of other top artists taking the stage at the host-free ceremony.