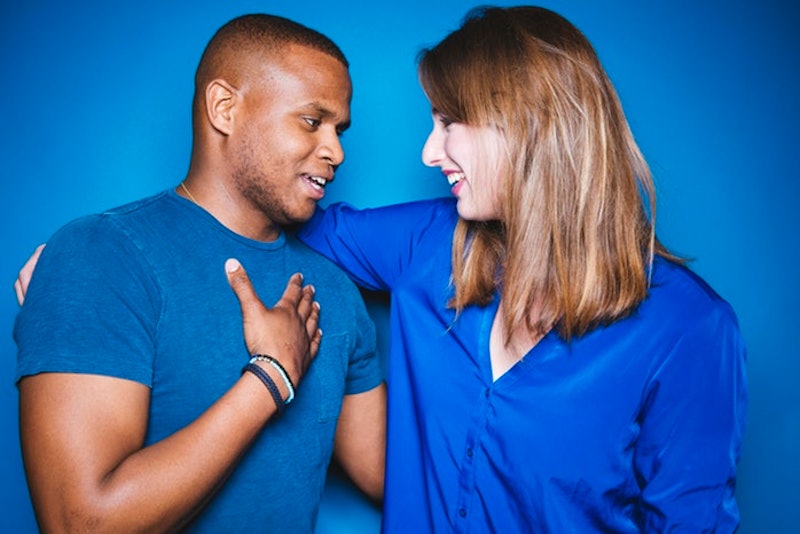 Dating can be full of surprises and you can suddenly find yourself dating people you never expected to — including an ex. Even though there are some exes you probably never want to see again, there are probably others you still have a soft spot for and would be willing to give the relationship another chance. But why? What is the psychology behind getting back together with an ex? The concept is even being explored on Netflix right now via the Australian TV show, Back With the Ex, where four couples try to make things work once more. Over the course of seven episodes, you see them go from reuniting and dating again to determining if they should stay together by season’s end.

“People may get back with previous partners for any number of reasons,” Jill Whitney, licensed marriage and family therapist at Green Tree Professional Counseling and creator of the relationships and sexuality blog KeepTheTalkGoing.com, tells Bustle. “An old partner is comfortable and familiar. Being back with someone you know can look really appealing when the dating scene gets old.”

Similarly, researchers from the University of Utah and the University of Toronto found that 49 percent of people who considered leaving their relationships were unsure about doing so. In their studies, they asked people why they would stay in or leave their relationship — and some of the reasons for staying were optimism, emotional intimacy, and fear of the unknown if they left. Sixty-six percent said their reasons for staying were because of the intimacy and dependence they had with their partner. On a related note, another study, from Kansas State University, found that almost half of all couples decide to give their relationship another try. So, if you’re considering getting back together with an ex, you’re not alone.

The Psychology Behind Getting Back Together With An Ex

As far as what lures you back to your ex, there may be several psychological factors at play. Tom Bruett, licensed psychotherapist and owner of Tom Bruett Therapy, tells Bustle that some people prefer an ex versus the unknown. “Some people get very uncomfortable with change and ‘the devil you know is better than the devil you don’t,’” he says. “Even though the relationship ended badly, there is a comfort there that can feel good.”

Another reason you may return to an ex is because you don’t like being alone, Joshua Klapow, Ph.D., clinical psychologist and host of The Kurre and Klapow Show, tells Bustle. “Being together because being alone isn’t appealing is being together out of avoidance, and the relationship is not likely to last.”

Heidi McBain, licensed marriage and family therapist specializing in women’s mental wellness, tells Bustle that couples also may reunite because both people genuinely miss each other. “This time, they are hopeful it will work out,” she says. “People in this situation think of the sentiment: ‘When it was good, it was really good.’”

Before Getting Back Together With An Ex, Assess Why You Broke Up — And What Has Changed

Of course, your ex is an ex for a reason, so before you decide to date them again, you need to both analyze what’s different this time around — and why you broke up. “If you’re thinking of getting back with an ex, think long and hard about why the relationship ended the first time,” Whitney says. “Most relationships end for one of three main reasons: mental health issues — like addiction — or major mental illness; emotional reasons, like how you handle conflict; or ‘fit’ reasons, such as having different lifestyle goals.” She says while it’s possible for any of these elements to change, some of them are harder to fix than others. “It’s foolish to assume that anything has really changed,” she says. “You may be tempted to be optimistic, but it’s much wiser to be realistic.”

McBain says that some people do change, however, which will help the relationship dynamic this time around. “Exes getting back together can work if both partners have taken time to work on themselves and their issues while they are apart,” McBain says. “And, the reason for the ultimate breakup between you needs to have been worked through on each side.”

You also have to be willing to forgive the other person for the past. “In order for the relationship to be successful, there has to be a willingness to forgive, grow, and evolve,” Bruett says. “If a couple can look at their past and use the pain as a catalyst for change, there is certainly potential for a different experience.”

Ask Yourself: What Will Be Different This Time?

All in all, before you get back together, Whitney says to make sure you talk about what’s different. She says to think about things such as: Has either of you changed life goals in a way that makes you a better fit? What do each of you want now? How well do those align? If you’ve been working on your personal growth, what have you learned? Is your ex supportive and kind when you tell them what you’ve been learning?

Dr. Klapow, too, says that there are a few things that can determine if getting back together is a good idea. “If there has been sufficient time since the breakup (months or years), you have both changed as individuals and may have sought individual therapy, and you rediscover each other as new people, this scenario has promise,” he says. “When time and circumstances have truly changed who you both are, you have a shot at starting, essentially, a new relationship together.” Dr. Klapow also says that if you two have had relationship experiences since your breakup, they may give you each a perspective that wasn’t present initially. “Over time, you two have come to realize that being together is the best choice,” he says.

In addition, Dr. Klapow says to keep in mind that every relationship has three components — person one, person two, and the relationship itself. “Despite what drove you two apart previously, to be together and be successful, each part of the relationship must be reasonably healthy,” he says. “Individual problems and relationship problems can drive a relationship apart — they all need to be addressed earlier rather than later.”

However, Some Relationships Are Better Left In The Past

As enticing as it may be to get back together with an ex, if the situation had been toxic or abusive (emotionally and/or physically), you need to proceed with caution. “Be realistic about the potential for change and don’t return to a situation that is dangerous or toxic — i.e., if there was violence or substance use,” he says. “It can be more difficult to overcome those obstacles without professional help.”

While it may be easy or convenient to get back together with an ex, you may want to look at the psychology behind it first — your reasons for doing so and what has changed since you two were together last time. Once you know that, your decision to reunite will be much easier.

More like this
Are Quality Time & Physical Touch Love Languages Compatible?
By Lexi Inks
Cookie Jarring Is The Dating Term You Need To Know
By Sophie McEvoy
15 Flirty Texts To Send Someone Who's At Work
By Lexi Inks
How To Do The Intimacy-Boosting Lotus Sex Position
By Laken Howard and Lexi Inks
Get Even More From Bustle — Sign Up For The Newsletter