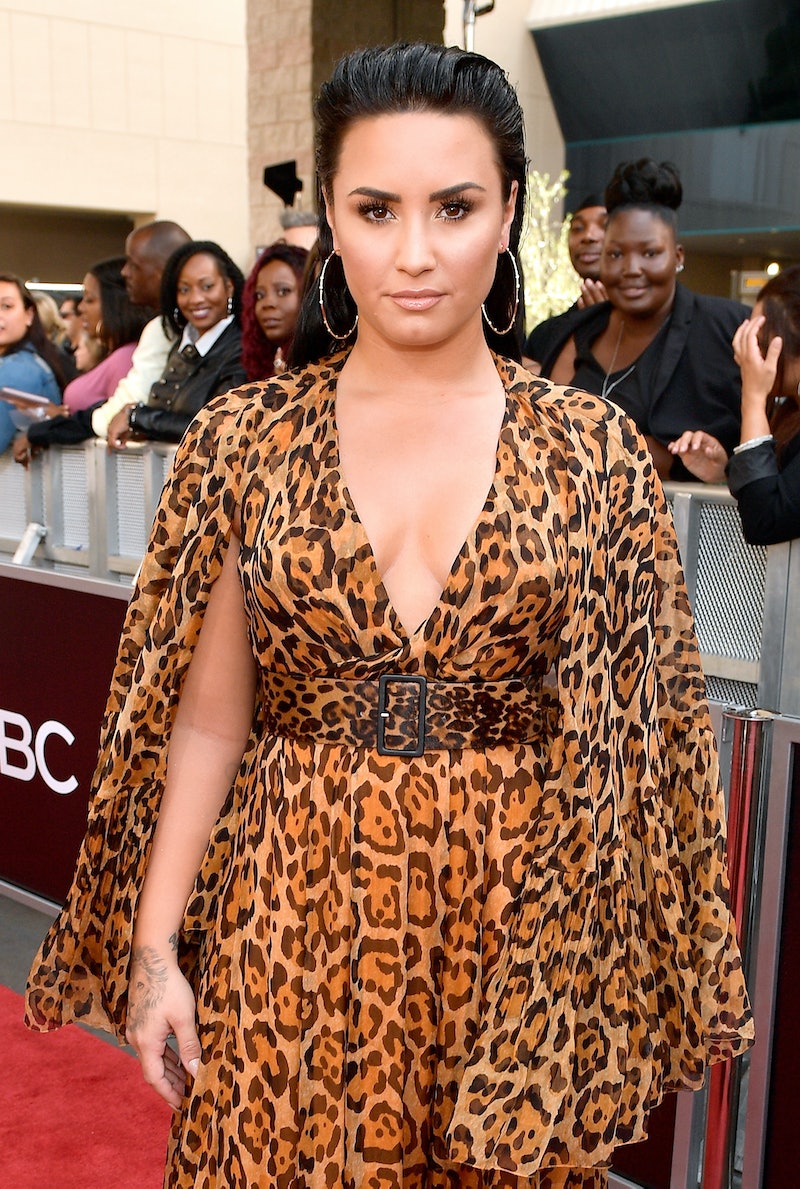 Music's biggest night is missing one of its biggest stars. Demi Lovato isn't at the 2019 Grammys, but maybe it shouldn't be all that surprising. She hasn't actually appeared at the Grammys since 2017 when she was nominated for her first and only Grammy, Best Pop Vocal Album for Confident (she lost to Adele's 25). Last year, Lovato didn't attend the show, but also went M.I.A. on social media during the broadcast, something that could happen again this year.

Just a few days before the 2019 Grammys, Lovato deleted her Twitter after receiving backlash for a joke about 21 Savage. (Lovato is still on Instagram, but hasn't posted since Jan. 14.) The singer told her followers that she was laughing at memes about 21 Savage, a comment which came after the rapper, who it was revealed was from the United Kingdom, was arrested by ICE for allegedly overstaying his visa.

Lovato was met with criticism by those who felt she was turning something serious into a joke, but on her Instagram Story she would explain that the memes she was referring to were about 21 Savage hiding the fact that he was British, not that he had been deported. Before leaving Twitter, Lovato criticized those who decided to go after her by making jokes involving her addiction. "If you're gonna come at me for making a joke," she tweeted, "try coming at me with some original not involving drugs."

This year, Lovato was nominated for Best Pop Duo/Group Performance for Christina Aguilera's "Fall In Line." It was a nomination that she called a "dream come true" on Twitter back in December, according to Billboard. "Woke up filled with hope,” she wrote in the since deleted tweet, adding “thank you @xtina. I love you so much.” She and Aguilera are going up against the Backstreet Boys' "Don't Go Breaking My Heart," Tony Bennett and Diana Krall's "'S Wonderful," Lady Gaga and Bradley Cooper's "Shallow," Maroon 5 featuring Cardi B's "Girls Like You," Justin Timberlake featuring Chris Stapleton's "Say Something," and Zedd, Maren Morris, and Grey's "The Middle."

If Lovato wins, it'll be her first Grammy on just her second nomination and it would be a meaningful win for her. "Winning a Grammy is the pinnacle of success as an artist in the music industry," she told the Recording Academy in 2017 in honor of her first nomination. "So, to me, it would just be all of my dreams coming true."

This win would also be an empowering one since the song is all about reclaiming your freedom, something Lovato has done over the last six months. Last month, Lovato celebrated being six months sober on Instagram calling it the "best day ever." In July, Lovato was hospitalized after a reported overdose. Weeks later, she cancelled the final dates of her tour and checked into rehab for treatment to focus on her health. "I have always been transparent about my journey with addiction. What I've learned is that this illness is not something that disappears or fades with time," Lovato wrote in a statement to fans following her hospitalization. "It is something I must continue to overcome and have not done yet."

For those fans who are bummed to not see Lovato there tonight, maybe think about watching her powerful Billboard Music Awards performance with Aguilera as a reminder of just how much the Grammys miss her, too.