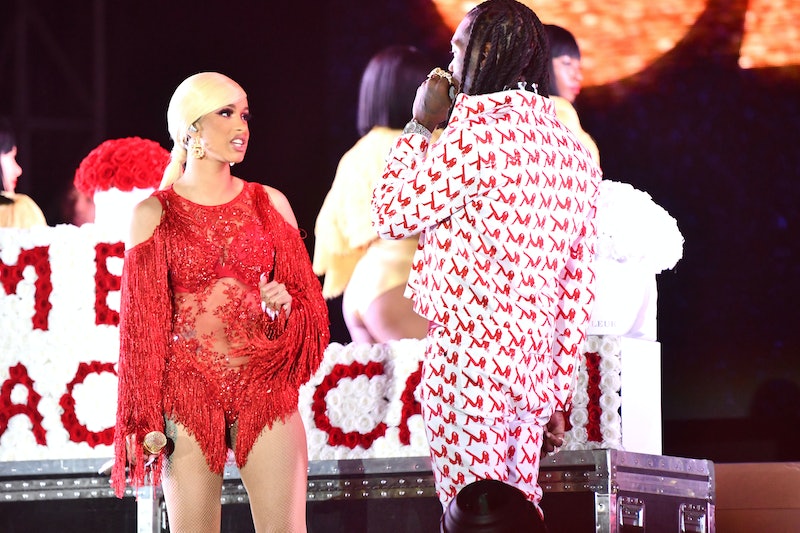 If you've seen even a single rom-com in your lifetime, you're likely well aware of the trope of the grand romantic gesture. It usually goes something like this: a man and woman are happily in love, the man inevitably screws things up, but then right at the very end, he makes an over-the-top romantic gesture in public to prove his devotion and win back her heart — and it nearly always works. Just take the ending of 2011 rom-com Friends With Benefits, when Dylan (played by Justin Timberlake) organizes a flash mob at Grand Central Station and successfully repairs his relationship with Jamie (Mila Kunis).

There are countless other examples of these kinds of stunts in TV and film, but grand romantic gestures don't just occur onscreen. Even though movies make it seem like big, public displays of affection are universally appreciated, the truth is that not all women want to be wooed in such a grandiose way — and grand romantic gestures are often anything but.

"Public proposals, public apologies, public displays of behavior that are primarily about the personal business of two people are a selfish, ego driven act," Joshua Klapow, PhD, clinical psychologist and host of The Kurre and Klapow Show, tells Bustle. "So often men are blinded by their own story that they create. They want the 'world' to know they are in love, they are sorry, they have something to proclaim. But the focus of the act is really about them and one person."

The perfect example of a grand gesture that seems more selfish than romantic? When Offset interrupted Cardi B during her performance at Rolling Loud in an attempt to win her back (following the recent news that the pair are splitting after one year of marriage). While some, including Offset, might assume that Cardi would appreciate this kind of "romantic" gesture, she was clearly not pleased with her ex's appearance — and honestly, who can blame her? If you think about it, Offset's gesture was selfish: it took the spotlight off of Cardi during an important moment in her career, and put the attention on himself and the status of their relationship.

"When a grand gesture is concurrent with an important moment in a woman's life, it becomes problematic," Amica Graber, a relationship expert for the background checking site TruthFinder, tells Bustle. "Offset storming the stage at Cardi B's recent performance at Rolling Loud [...] became performative instead of sincere. It should have been a moment that was about Cardi's career success, and instead, the gesture demanded that the spotlight and subsequent attention be refocused on Offset's narrative instead."

He turned her performance into his performance, and stole her thunder during what should have been a time for her to shine. The same is true for the guy who proposed to his girlfriend during the NYC marathon... before she had finished! Even if he had good intentions, that doesn't excuse him for not considering his partner when planning something like this.

"Women often have to work extremely hard to have the same opportunities that are awarded to their male counterparts," Graber says. "When they finally achieve their goals, they should be given the space and respect to fully enjoy their success. If a loved one hijacks that moment, even with good intentions, it ultimately devalues their experience."

When planned thoughtfully with both partners' feelings and desires in mind, you can, of course, still pull off a genuine, sweet romantic gesture in your relationship. These gestures only turn toxic when it's clear that the person making it didn't take their partner into account during the planning process — or especially when their motives are manipulative.

How Public Gestures And Proposals Can Be Manipulative

Although there are plenty of people (of all genders) who would genuinely enjoy a big romantic gesture — like a public proposal — unless your partner has explicitly stated that that's what they want, they're best avoided. There's so much added pressure that comes with declaring your love or proposing in public, and it's unfair, and even manipulative, to put your partner in that sort of position without their consent.

"Bringing in an audience may make the fanfare large, and the spontaneity novel, but it puts the person on the receiving end in a very difficult, and socially compromising situation," Klapow says. "Rejecting someone when they propose or apologize can be one of the most emotionally difficult things a person can do. To do that in front of multiple people... simply tilts the balance towards the person saying 'yes' when they really want to say 'no.'"

When tons of people are watching your reaction, it can feel nearly impossible to reject someone or rebuff their affections. Or maybe you want to say yes, but simply hate being in the spotlight (and your partner knows it). Whatever the case, if you suspect your partner is making a public gesture as a way to get something they want from you — whether that's an engagement or forgiveness — that's toxic behavior and absolutely warrants any anger you might feel.

Just because movies might have us believe otherwise, it's actually completely valid to be upset or uncomfortable if you're on the receiving end of a "surprise" gesture and feel put on the spot by your partner. According to Klapow, even if they don't realize it, there's often a psychological motive behind grand romantic gestures.

"The grand gestures that many men engage in are often done consciously to make more of an impact, but subconsciously out of fear of rejection," Klapow says. "If they propose or apologize for example in front of an audience, they know that not only will there be witness to their dedication, but there will be an audience pulling for them."

The thought of getting rejected isn't fun for anyone, but then again, neither is the thought of having to do the rejecting... especially if it's in front of a crowd. If you truly respect your partner and their wishes, you wouldn't try to force their hand by putting them on the spot in public. If you want to be sincere in your gesture, it's better to do it in private, where both you and your partner have the space to be genuine in your reactions, rather than feeling pressured to respond a certain way.

"Apologizing or proposing to a person with no one else around, no spectators, etc., is a more level playing field," Klapow says. "It allows the person on the receiving end to convey honest feelings and reaction without the pressure of others. In the end — the grand gestures often kill the grand intention."

Being a good partner doesn't mean mimicking everything you've seen in romantic movies: it means communicating with your partner, and taking their feelings into account when you make decisions. If you have an idea for something romantic and over-the-top, all you have to do is ask your partner how they'd feel about a public gesture — and then honor their wishes. Maybe your partner is totally cool with you renting a plane and writing a marriage proposal in the sky, or maybe the idea of that makes them cringe. In either case, remember that there are plenty of little ways to show your love and affection every day — just because they're small doesn't make them any less meaningful.