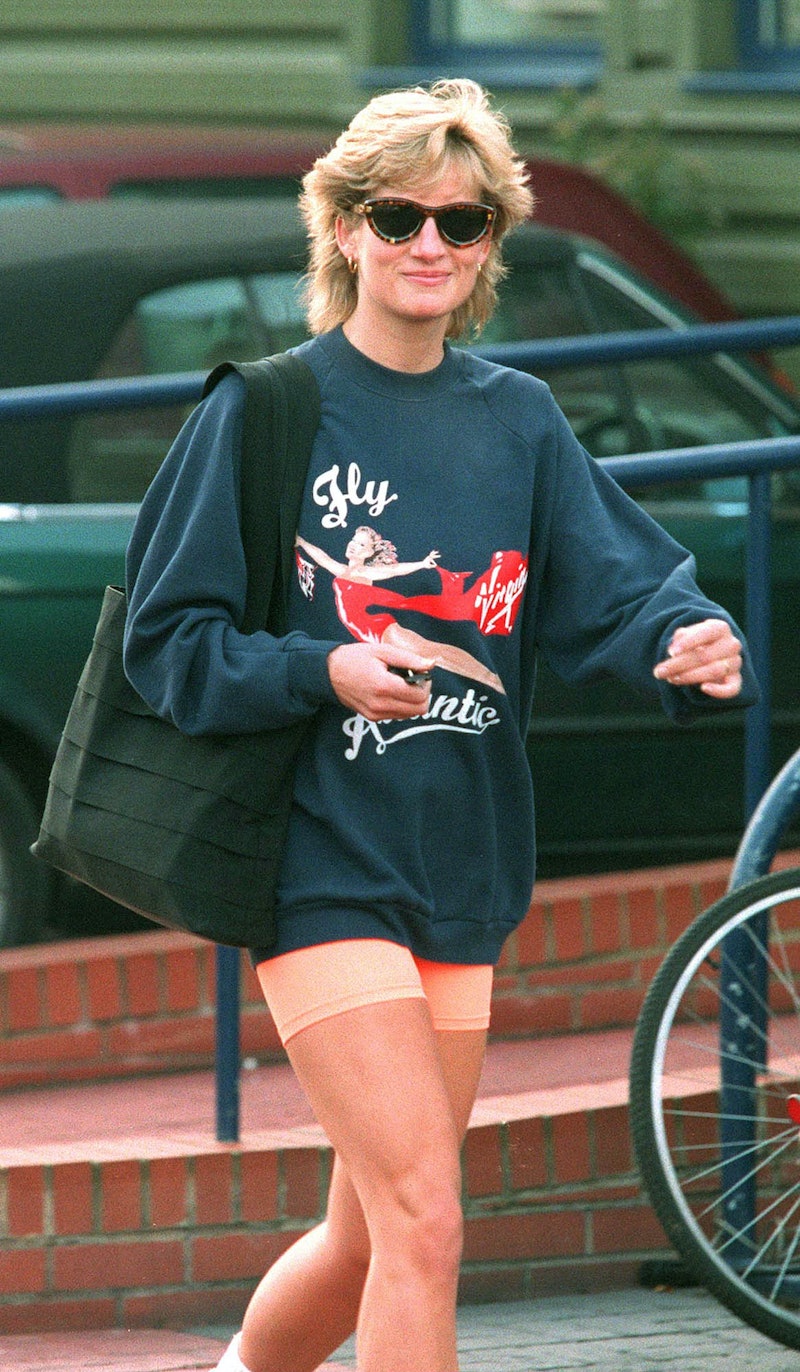 In this excerpt from the The Lady Di Look Book writer Eloise Moran reflects on the meaning behind Princess Diana’s cycle shorts-and-oversized sweatshirt combo, and the London-based athleisure label she couldn’t get enough of.

I can confidently credit Lady Di for being the first to make athleisure wear a thing. She was unquestionably the first major figure to mix a casual sportswear wardrobe with what I like to call “f**k-off” handbags — a Gucci Bamboo suede tote, a Tod’s D leather shoulder bag, and a one-of-a-kind Versace crocodile bag were among her favourites — her pieces of very expensive armour. (Later, after Lady Diana’s death, the Versace brand reproduced the Princess’s exclusive handbag and named it the “Diana,” in honour of the late princess and dear friend of Gianni Versace who was killed the same summer — 1997 was a rough year).

Although some of Diana’s famous workout outfits have become somewhat of a style phenomenon over the past few years, the Princess purposefully recycled her gym outfits over and over, in the hopes that the press couldn’t get any new photographs of her, leaving her to work out in peace.

She couldn’t understand the fascination or frenzy behind her engaging in such an ordinary thing. Yet, to the press, it was a sensation. Here was a member of the royal family stepping out amongst commoners showing off a lot more than just her calves and ankles. It was simply unheard of at the time for any British princess to be caught in workout gear other than the usual equestrian togs, not to mention in Polo Ralph Lauren sweatshirts emblazoned with giant “USA” logos — signifying her ties to foreign allegiances, plus her adoption of a new ambassadorial role. Perhaps she also looked to the U.S., a place where hard work rewards all your wildest dreams (supposedly), as a symbol of somewhere she aspired to be — a place of liberty and freedom to say, do, and wear what one pleases.

'The Lady Di Look Book: What Diana Was Trying to Tell Us Through Her Clothes' by Eloise Moran
Waterstones

Multiple days a week, the Princess, a self-titled “frustrated dancer,” exercised at the Sloane-friendly Chelsea Harbour Club with her personal trainer, Jenni Rivett, who began working with Diana in 1990. Eventually, Rivett introduced her to Earl’s Court Gym because it was “a serious gym, without a social purpose,” which is what Diana found refreshing — no velvet hairbands there.

The place was known for its queer clientele, and the gym’s owner, entrepreneur Jeremy Norman, said he believed Diana wanted to work out there because she “really liked gay guys.” He said, “She really felt at ease with gay men, she could relate to them and she didn’t feel threatened by them in any way.” Her social circle of Gianni Versace, Elton John, and Wham! singer George Michael certainly backs this theory up.

When Diana, who was known for her uncontainable energy, wasn’t in the gym, you could find her rollerblading through Kensington Gardens with her trainer. “We were known to ignore some of the ‘no rollerblading’ notices,” said Jenni. “Once, a police car spotted us, slowed down, and then realising who it was, glided away.”

Thanks to a healthy diet (apparently she was into juicing!) and exercise routines from popular nineties step aerobics workouts (Mr. Motivator, anyone?) to power walking through the royal gardens, by 1994, just in time for her Serpentine appearance, she had physically peaked. She was fit, strong, and growing more confident by the minute.

“I just encouraged her with healthy eating and I honestly believe the exercise helped her manage her bulimia,” Jenni explained to the Daily Mail. “I believe as her body became fit, strong and healthy, she felt empowered and ready to face those bad times head-on.” In Diana’s 1995 Panorama interview with Martin Bashir, she insisted, “I’m free of it (bulimia) now.” Although we will never know for certain if Princess Diana had conquered her battle with the disease, she appears visibly healthier than in the photos of her looking gaunt and frail from just six years before.

While Camilla was tucking into the Princess’s sloppy seconds (I of course mean Charles, not those garlicky chicken Kievs — although I’m sure she was enjoying those too!), Diana was working on her revenge body, hitting the gym in sweatshirts by London-based athleisure label Sloppy Joe Essential Clothing, founded in 1993 by athletics designer Jackie Harris. Fresh out of a divorce herself, Harris decided to open a shop and start making her own sportswear, with the name inspired by her father’s favourite, oversized sweatshirt, which her mother used to call his “Sloppy Joe.”

Harris told me about the morning Diana was first pictured wearing her sweatshirt: “My phone was ringing off the hook with my mates saying, ‘Have you seen the front page? Diana’s in your shirt.’” On the front page, accompanied with a headline about the Princess’s latest dalliance with the rugby player Will Carling, was a shot of Diana wearing a Sloppy Joe, her cycling shorts indiscernible. She paired this sporty sweatshirt with a pair of Nike Air sneakers, a Versace crocodile bag, and the Italian label’s iconic metal-rim sunglasses. It was a timeless blend of low- and high-end fashion, which symbolically matched her status as a regular and relatable citizen but still a Princess with a lifestyle entirely unattainable to most.

In the past few years, Harris’s small independent brand has seen the “Diana effect” come full circle, with a whole new generation preordering the brand’s namesake sweatshirts, wanting to get an authentic piece of the Diana look. Fans of the brand are often delighted to see that the sweatshirts are still made exactly the same way as they were when Diana first wore them in 1996.