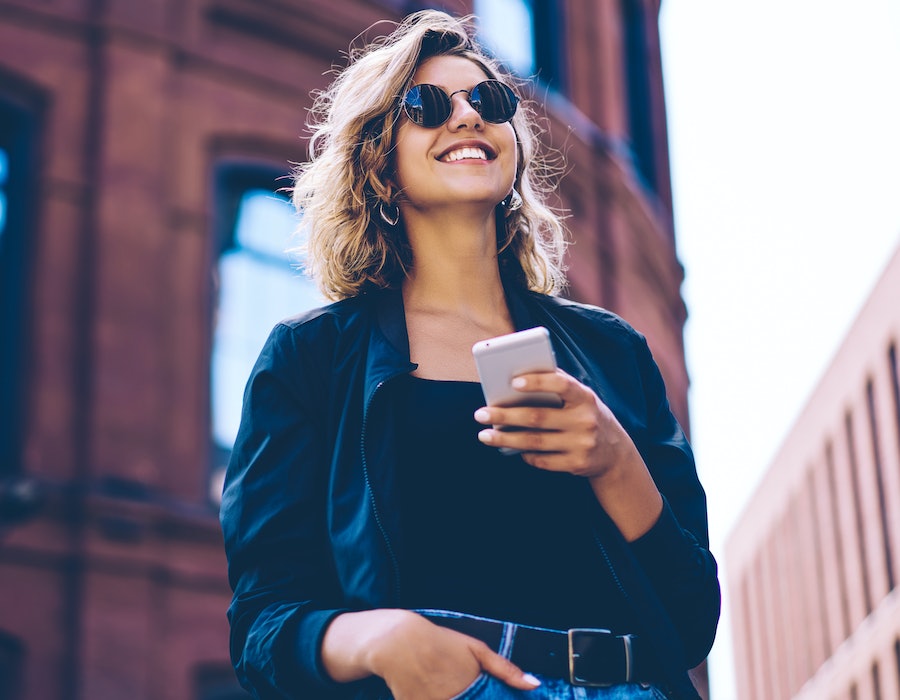 It can be difficult to tell if someone is flirting with you, even on a good day. People get nervous, they try to "play it cool," and some simply lack the self confidence necessary to flirt in an obvious way. If you've ever encountered this issue — especially when it comes to someone you're interested in — then you know how annoying it can be. Do they like you? Or don't they? It can be tough to tell.

And that's why you need to start recognizing the subtle signs of flirting. "It is important because you could be missing an opportunity to connect with someone," says licensed clinical psychologist Dr. Christopher Barnes. And, it can save you a lot of guesswork, while also opening the door for further communication. If that cute stranger, or your love interest at work, is throwing off these signs, then you can kind of help them along.

"When you're nervous, it's even more difficult to come across clearly with your intentions, usually because of fear of rejection," author and life coach Jaya Jaya Myra tells Bustle. So try to be understanding when it comes to their failed attempts at catching your eye. That shy stranger may seem disinterested at first. But if they're displaying any of these signs below, they're likely more into you than you think.

1. Their Behavior Noticeably Changes When You're Around

That lovelorn coworker may not openly flirt with you in a way that screams "I'm into you." But it may still be obvious if they act differently when you're around. "Do they clam up? Talk more? Laugh more? Touch more? Tell more jokes? While some people might be obvious flirts, most simply display flirting through nervous behaviors," author and life coach Kali Rogers tells Bustle. "So how do they act when they are nervous? See if the shifts in behavior line up with nervous ticks, and you'll be onto something."

2. They Touch You In Little Ways

Little "accidental" touches are a major giveaway, so be on the look out for all those arm grazes and quick pats on the shoulder. "Often the person will touch your arm or try to brush hands or feet if you are seated at a table or bar," dating and communication coach Sarah Curnoles tells Bustle. "These are sensitive areas and send signals to our instinctive brain about attraction."

Eye contact is incredibly flirty, but it can be misconstrued if you think someone is "disinterested." So don't allow yourself to be fooled. "Someone that is interested in you will hold eye contact longer than normal, and will smile," Curnoles says. But you might also catch an admirer's eye, just as they nervously look away.

4. They Move Into Your Line Of Sight

The next time you're out mingling at a party, take note of the hot but "standoffish" stranger who keeps magically ending up in your line of sight. As Curnoles says, "You will also notice they find a way to be in your eye line or they will move so they are closer in proximity." Cute, right?

5. They're Dishing Out Backhanded Compliments

When someone's jokingly picking on you — or dishing out backhanded compliments — it's almost always an awkward attempt at flirting. "Backhanded compliments allow someone to test the waters and see if you respond in a favorable manner," Myra says. "While not the not most straight forward way to flirt, it's extremely common for people who don't want to make their intentions obvious."

Social media makes it easy to give someone attention, without having to talk to them. And that's why it's a go-to for people who want to flirt but can't quite make it happen. "If someone is constantly liking or commenting on your social media, they're probably interested in you," Myra says. "With all the content flying around now a days, if someone takes the time to check out everything you post, you know there is more to it than meets the eye."

7. They Fidget, Especially In Suggestive Ways

OK, so let's say you're out and your date starts playing with their hair, or grabbing onto their wine glass. Definitely pay attention. "If they are playing with their glass and even more so the stem of their glass, then that is a subtle sign of flirting/interest," certified relationship coach Susan Golicic, PhD tells Bustle. "It gives someone who is nervous something to do with their hands, and it is subconsciously a suggestive gesture."

8. They're Body Is Pointed In Your Direction

When you're not sure if someone's into you or not, take a look at their feet. (Or their knees if they're sitting down.) "If their knees are pointed in your direction under the table, then they are interested," says Golicic. "Their body is giving you their attention even if their brain is having trouble engaging because of nervousness."

9. They Seem Very Relaxed And Present

While not flirting, per se, spiritual counselor Davida Rappaport tells me someone might be into you if they take on a relaxed and calm demeanor whenever you're around. This could be a way of playing it cool. But it's also a sign they're enjoying your presence. So, if they don't check their phone or look at their watch, take it as a good sign.

10. They Keep Pointing Out Their Weaknesses

While maybe not the most mature way to flirt, it is a good sign if you're crush is really laying it on thick with the self-deprecating humor. "When they point out a weakness and shine a light on your strength, it's a flirty way of bonding," says relationship expert Lisa Concepcion. They may also be hoping you'll step in to "help" them with a perceived flaw.

11. They Always Laugh At Your Jokes

It seems like such a simple thing, but a person with a crush will a) always hear what you say and b) make an effort to show their appreciation. So, if this potential partner is always responding to you with a laugh or a smile, take note. As matchmaker Bonnie Winston says, "If they giggle at your jokes, that may be a subtle way of flirting."

While not necessarily classic signs of flirting, these little gestures are still the real deal. And, they might even mean that nervous, slightly standoffish person is actually totally into you.