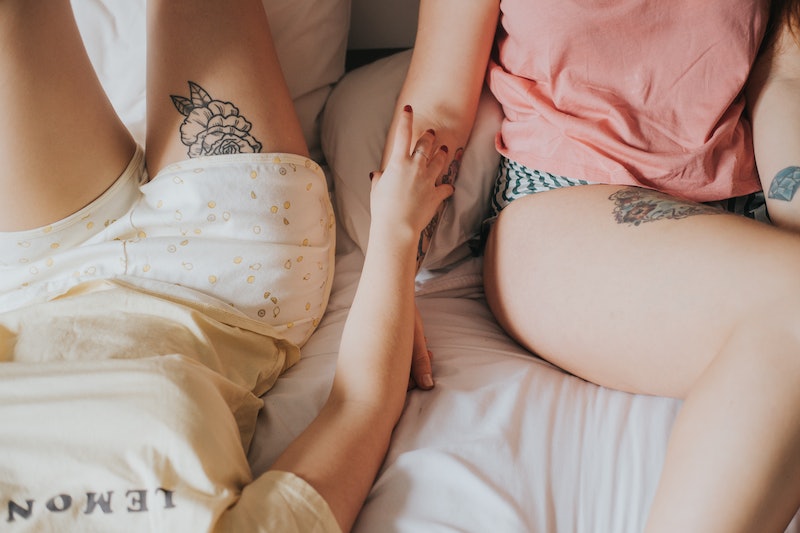 My friends and I were talking about when we lost our virginities recently, and I said, without thinking, “15.” It’s when I first had sex, after all. But I wasn’t expecting the follow-up question — was it with a girl or guy? Can you lose your virginity to a girl if you are a girl? How do lesbians lose their virginity? What counts as sex?

“Our culture is so fixated on vaginal penetration with a penis constituting ‘sex,’ as that was a standard set a long time ago. It may be helpful for legal purposes but not in terms of consensual sexual expression,” Amy Levine, sex coach and founder of Ignite Your Pleasure, tells Bustle. “In the age of fluidity and choice, when we look at lesbian relationships it serves as an example that the definition of sex can be broadened,” she adds, noting oral sex, lesbian fingering, or using a sex toy on a same-gendered partner. “They are all sex acts. The real question is... does it matter? Let each person define virginity for themselves and communicate their definition to their partner(s).”

So How Do Lesbians Lose Their Virginity?

Amy Levine, sex coach and founder of Ignite Your Pleasure

More like this
7 Women Share Their Best Orgasm Stories
By Lexi Inks
How Do I Deal With Both ED & Premature Ejaculation?
By Sophia Benoit
Is It A Rebound Relationship Or The Real Thing?
By Carolyn Steber and Lexi Inks
Is It Bad That I'm Not Interested In Sex Or Dating Right Now?
By Sophia Benoit
Get Even More From Bustle — Sign Up For The Newsletter