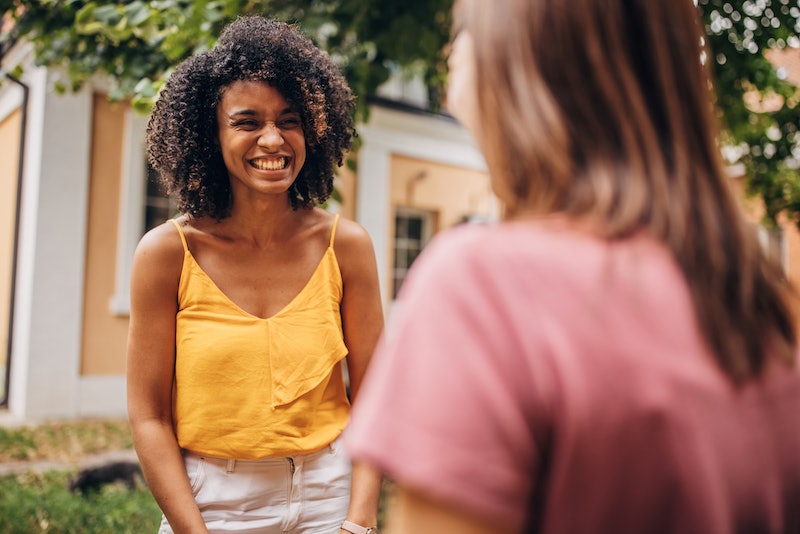 It sounds so simple, and yet giving someone a compliment really can brighten their entire day. This is true whether you compliment a stranger in a coffee shop or you offer a few kind words to the people you care about most.

“Everyone wants to feel important and valued,” Janika Veasley, MFT, LMFT, a licensed marriage and family therapist, tells Bustle. When it comes to those closest to you, like friends and family, a compliment “not only makes them feel great, but also lets them know that you see, accept, and honor them for who they are.”

And yet, for all the positive benefits, it isn’t always easy to figure how how to compliment someone. So here’s a trick: The key to giving someone a compliment is to focus on what makes them unique. "Find something you truly appreciate about the person," Kimberly Hershenson, LMSW, a New York City-based therapist, tells Bustle. And then cater your compliment to them, their glowing personality, and/or something wonderful they did or said.

By focusing on what makes the other person special — whether it’s their personality, something they’re really good at, or even the jewelry they chose to wear — the compliment will feel 100 times more impactful (not to mention more genuine.) Read on for 19 tips to keep in mind when giving someone a compliment so that it really hits home, according to experts.

While a quick “you did a great job!” or “you’re awesome” is always nice, the compliments that make people feel the best tend to be specific rather than an over-generalized positive statement, says licensed professional counselor Tiffany Ashenfelter, LPC-S. Basically, instead of saying “you’re an amazing person,” tell the recipient why they’re an amazing person. Doing so caters the compliment directly to them, which will feel really good. There is, after all, a reason you feel the need to compliment them, and it can be really nice to say it out loud.

People love to hear their own name, which is why weaving it into your compliment is another way to make it feel more personal and special. So while you're forming one that focuses on what makes them great, consider starting it all off by saying their name.

"Using someone’s name communicates 'I see you and you matter to me,'" Natalie Franke, a networking expert, tells Bustle. It isn't just a compliment thrown out casually, but one that's personal and clearly intended for one person.

If your friend just spent an hour listening to your long list of problems (great friend, BTW), nothing will show gratitude quite like complimenting their listening skills.

"Tell them that they are a great listener and that their listening has helped you out tremendously," Dr. Joshua Klapow, a clinical psychologist, tells Bustle. It’ll feel good because, as the listener, they may not feel like they’re doing much to help.

And yet, when you just need to vent, nothing could be further from the truth. "Letting the person know that [simply listening] was helpful will light up their day,” he says.

Complimenting someone's style may seem superficial, but if you link the compliment to something unique about them, it can go way beyond simply likely a shirt or a cool necklace. So if you want to make someone feel extra amazing, share a quick reason why.

"We are all so beautifully unique and our style is an artistic way of expressing who we are in that moment, so bringing attention and appreciation to a choice in fashion is a fun way to say, 'Hey! I like who you are right now,'" life coach Madeleine Culbertson tells Bustle. Your compliment then transforms from a casual acknowledgment to something a lot more special.

After putting in a ton of effort — either at work, in school, etc. — it can mean a lot to have your hard work acknowledged and recognized, says consultant and life coach Lisa Sansom. So go ahead and be that encouraging, uplifting person for somebody else. For example, you could tell a coworker why you appreciated their extra help and explain what it meant so much to you. It's all about paying attention to the millions of tiny things other people do, and highlighting the good stuff.

6. Point Out How Kind They Are

If you really want to warm someone right to the core, compliment their kind personality instead of just saying they’re “so nice.” As Klapow says, "Telling someone they are kind-hearted, have a caring-heart, etc. elevates the 'nice' compliment, because you are speaking directly to who they are, versus what they have done."

Another key to giving a compliment is timing. Don’t hesitate to offer someone a compliment when they look like they could use it most. After all, "an honest and heartfelt compliment can be so powerful in changing the way someone feels about themselves," life coach Lizi Jackson-Barrett tells Bustle.

8. Keep The Focus On Them

"The goal of complimenting someone is to make their day better," Amy Ogden, a marketing expert and inspirational blogger, tells Bustle. “The most impactful compliments are brief and don’t call attention back to yourself."

In other words, don’t give a compliment while simultaneously knocking yourself down. "It’s better to say, 'Your skin looks incredible lately!' rather than, 'Your skin looks so good, I wish mine looked like that’ because then you’re asking the complimentee to praise you back and discount your compliment,” Ogden says. And that takes some of the energy out of it.

9. Let Them Know They Had An Impact

Any compliment that calls attention to the impact a person has made will certainly mean a lot. This may be something you can try to do at work, especially if you have a coworker who constantly goes above and beyond. "People often don't realize they are having an impact beyond one person," Klapow says. "Reminding them or highlighting for them how their impact goes beyond you is powerful."

Everyone needs a little reminder of their amazingness, so don't be afraid to point out someone's positive talents.

"We spend so much of our time doubting ourselves, our abilities, our personality traits, that having it reinforced to us that something about us is special or interesting or awesome can be incredibly gratifying," therapist Katie Krimer, MA, LMSW tells Bustle.

This is one that goes over particularly well at work. By pointing out someone’s talents or good ideas, Krimer says it can make them feel more confident in the skills they may doubt within themselves.

Remember, compliments aren’t just reserved for your coworkers, BFFs, and family. "For example, if your barista made you a kick-ass coffee, let them know,” Krimer says. “They make a billion a day, so it'll probably feel extra great to hear that something small that they did impacted a random passerby."

12. Focus On What Draws You To Them

Let the other person know what they mean to you by focusing on their unique attributes and why you feel drawn to them. Then, “let them know in a genuine and authentic way,” Dr. Cassandra Aasmundsen-Fry, a licensed clinical psychologist, tells Bustle. Simply say something like, “Being around you makes me feel really safe and secure. You have a great energy.” Or whatever else feels right!

While there’s nothing wrong with sending a quick compliment via text or email, it’ll be extra impactful if you get the chance to do it IRL — as in when you can look the other person in the eye, touch their shoulder, etc. “Own it and show them through your [body] language that you see them and the ways they are special,” Aasmundsen-Fry says.

Another way to give a good compliment? Look for something that is not only positive but lasting, says Atkinson. Think along the lines of this person’s influence, their warm energy, their insight, their awareness, or their perspective.

“These are aspects that are truly individual and that are difficult to pinpoint but 100% authentic,” Atkinson says. “Compliments that remind the giver and the receiver that they are both more than what they look like or what they can produce are extremely powerful and positive.”

15. Focus On What They Care About

It also helps to think about the person’s interests or goals. “To compliment someone in a way that resonates with the person's highest hopes for themselves and who they want to be in the world can truly change their day,” Atkinson says. To do so, zero in on what matters to them and point it out. If you know they care about being a good friend, let them know they’re an integral and important part of your close circle.

16. Call Attention To What You Admire Most

If you admire someone, go ahead and say it! According to psychotherapist Dr. Fran Walfish, giving a compliment is one thing, but it carries a lot of weight to say something like, “I really admire how you stand up for yourself at work” or “I really admire the way you prioritize meaningful things in life.”

“Many of my patients today express feelings of not being acknowledged, validated, or appreciated and accepted — flaws and all,” Walfish tells Bustle. By pointing out what you admire, you’ll give someone a much-needed boost.

17. Say Something Nice “Just Because”

Unfortunately, compliments can be easy to misconstrue. For example, if you tell someone they look great one day, they might assume it means they look bad other days. “This doesn’t make anyone feel good,” Janika Veasley, MFT, LMFT, a licensed marriage and family therapist, tells Bustle.

It’s usually best to avoid commenting on someone’s appearance or health, even though it’s coming from a good place. It’s also important to keep an eye on your tone, Veasley says, so your compliment doesn’t accidentally come out sounding like criticism or insult.

A compliment as simple a “seeing you makes my whole day better” really packs a punch, says Kristi Miller, MA, LMFT, a licensed therapist and relationship expert. So the next time you feel a compliment bubbling to the surface, blurt it out.

You can also intentionally look for ways to dole out more compliments in your everyday life, particularly to those who need it most. As Miller says, a compliment can help you make new friends, feel closer to folks in your life, and boost everyone’s mood — it’s a win on all fronts.

This article was originally published on Sep. 27, 2017