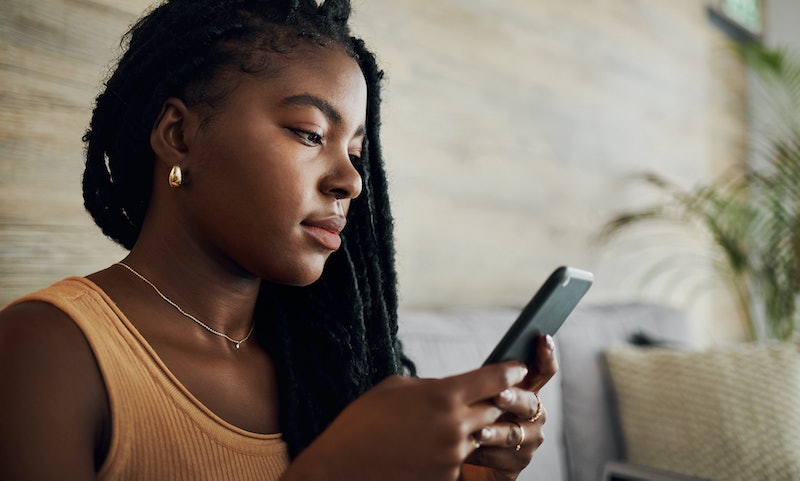 You've got a new crush, and you are feeling it. Three dates in, you're already looking up cute Airbnb staycations and romantic bistros with outdoor dining. You're about to send them a cute yoga selfie when they hit you with: "I don't think we're a match." After processing the initial shock (and Postmating yourself a giant bowl of pho), knowing how to respond to a rejection text message can help you move on with grace (and get closer to finding someone who is a good match).

According to dating coach Meredith Golden, having a "rejection response" saved in your phone notes may save you some energy and heartache. "There's less sting if you don’t have to write it out every single time," Golden tells Bustle. "You certainly don't have to respond, but it’s nice to take the high road." If you're totally bummed about your crush calling it quits, Golden suggests practicing cognitive reframing or changing the way you see the situation. "I prefer the term 'closure' to 'rejection,' Golden says. "Closure is beneficial!"

When you’re crafting your response to a rejection text, says Thalia Ouimet, a matchmaker and dating coach, “It never warrants a very long, dragged-out text.” In fact, the other person is probably hoping there won’t be a super long response. Some connections aren't intended to become long-term serious relationships — and that's OK. (Even if they were super hot and you're super sad about it in the moment.) Here are 16 expert-approved responses to rejection text message examples to keep on deck.

Thalia Ouimet, matchmaker, dating coach, and founder of We Met Through Thalia

More like this
Bumble's "Compliments" Feature Lets You Message Before You Match
By Lexi Inks
Do I Have To Tell My Crush That I Slept With Her Ex?
By Sophia Benoit
How To Have A Hometown Hookup Without Catching Feelings
By Lexi Inks
65 Funny Dares You Can Send Your Friends Over Text
By Siena Gagliano
Get Even More From Bustle — Sign Up For The Newsletter