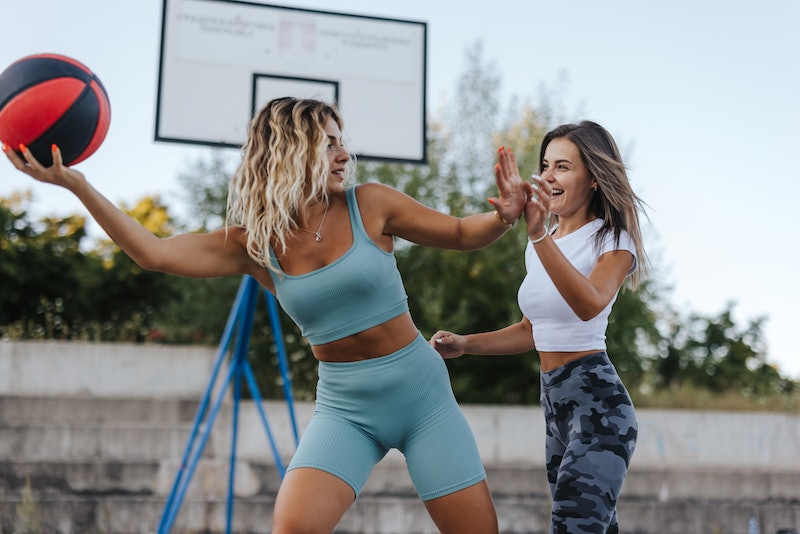 You’ve scored something truly amazing — your dream job, the apartment with the exposed brick kitchen, a DM exchange with Phoebe Bridgers — and while most of your friends are dancing around in delight, one is sulking in the corner, giving you green-eyed side-eye.

Making other people jealous of your stellar achievements may seem pretty harmless, but if your friends are jealous of you, it can get in the way of a healthy relationship — and feels pretty cruddy, to boot. “I got a book deal. It was great. Half the people in my MFA stopped talking to me,” Maya, 35, tells Bustle. “It was the best thing that had ever happened to me professionally, and I literally stopped getting invited to parties.”

Experts say that people rarely feel comfortable admitting that they’re envious outright, which means you may end up playing detective to figure out why your childhood bestie is being distant and passive-aggressive. “Remember that this type of behavior is not about you, but about your friend’s issues and insecurities,” counselor Heidi McBain, LMFT, tells Bustle.

Below, experts weigh in on signs of jealousy in friendship — and what you can do to address it.

1. They Say Situations Are “Unfair”

Are your friends the kind to regularly talk about how it’s “unfair” that you have certain things and they don’t? “One way to tell if a friend may be jealous or envious of you is to pay attention to how they talk about other people and view the world in general,” Liz Kelly LICSW, a therapist with mental health platform Talkspace, tells Bustle. “There is a good chance that your friend might be jealous of you if they often feel that life is unfair.” Often, those who use this term are blaming outside circumstances for why they can’t achieve what a friend can — even though both of you can do whatever you set your minds to.

A little of competition can be a good thing, but too much could be a sign your friends are seeing green. You spurred one another along like champs, but now things are getting more complicated than Paris and Rory in the early seasons of Gilmore Girls, and their one-upmanship is causing issues. Not only does excessive competitiveness go hand-in-hand with jealously, it can also be a sign the friendship is toxic, experts tell Bustle.

3. They Stay Away From Your Social Media While Lavishing Attention On Others

It seems like a small thing, but Cynthia Catchings LCSW-S, LCSW-C, also a therapist with Talkspace, says that their Insta and Twitter comments can be a legit sign of jealousy. If they don’t like or comment on your social media posts while giving a lot to the others in your group chat, she says, that could be a sign that they’re avoiding praising you out of jealousy. If they’re just a hermit who hates social media or can’t remember to check Twitter to save their lives, though, don’t read too much into it.

Jealousy is often subtle, experts tell Bustle, but you can pick it out if you listen to it. “You can pay attention to their comments, which are typically passive-aggressive, or direct but negative,” Catchings says.

“I couldn’t say anything that was good about my life,” Jane, 22, tells Bustle, of a group of jealous friends. “I had to cut them off because everything I said, they’d just counter with how awful their life was. And I’d end up comforting them rather than celebrating myself, and feeling crap about even mentioning good things.”

5. They Try To Bring You Down

You tell your friends that you got that promotion, and somehow, they manage to turn it into a bad thing. (Who cares if you’re paying more taxes when you’re making more money!) “A friend feeling envious of you might show up as them trying to undermine you and bring you down,” McBain says. A pal who responds to your positive life updates with something like, “Well, it wasn’t like there was anyone else up for it, but good for you,” might be having a real attack of jealousy.

6. They Refuse To Celebrate You

You’re hosting a housewarming brunch to celebrate that new apartment, and your friend makes a last-minute excuse to go home and feed their cat — or worse, they show up and sulk the entire time, or direct the conversation away from how wonderful your plant corner is. “Not celebrating your successes with you is a sign” of jealousy, McBain says.

“A few people did show up for my book launch, so that was nice,” Maya says. “But by that stage, I didn’t trust them at all.”

7. They Need To Upstage You

“Friends or family members that feel envious of you typically one-up you,” Catchings says. “No matter what you have done, they have done it before and better.” Your pay raise isn’t as impressive as the one they got last year, the vacation you took pales in comparison to their holiday, and your volunteer work is very nice, but did they mention they gave $10,000 to charity last year? It’s a clear sign of self-esteem issues, Catchings says.

Behind every jealous person are some of their own insecurities, McBain says. Are your friends the insecure type? Those who are comfortable with themselves and have a strong sense of self-esteem tend to be less jealous of those around them. On the other hand, if you notice your friends are not secure in who they are, you might find them more likely to rear the inner green-eyed monster.

9. They Don’t Respect Your Decisions

A jealous friend will constantly criticize your actions or choices, Catchings says. Let’s say you choose to go on vacation with your spouse and leave your dog at home with grandma. Instead of being excited for you that you’re getting some much-needed time away, your friends make you feel guilty for not bringing your dog with you. If it seems like no matter what you do your friends are always dragging your decisions through the mud, this could be another sign they’re flat out jealous.

Are your friends obsessed with getting invited to elite events? Need to get their hands on the latest designer trends? Then, when you get something above and beyond what they have, they seem to struggle? “If they are obsessed with being invited to the best parties and achieving a certain social status, they may be jealous,” Kelly says. Status and success are huge players in jealousy.

11. They Play Down Your Accomplishments

Accomplished something huge? To your friends, it’s not a big deal whatsoever. They might play it off like, “Oh, you got a raise — how nice! A lot of people got raises this year.” Jealous friends will do this as a way of leveling the playing field, and making themselves feel better. Catchings says these negative comments are designed to shut you down, even if they’re cloaked in “honesty.”

“My friend used to say she was trying to put stuff in perspective, so I didn’t get big-headed,” Jane says. “It just ended up making me feel small.”

12. They’re Talking Behind Your Back

Jealousy may not come out in front of you, but it’s more than likely being exposed behind the scenes, often to your other friends. “Other people may tell you that your friend is talking about you behind your back, and they deny it when you confront them,” Catchings says. This can go the other way. Kelly says if your friend regularly gossips about others and downplays their achievements in conversation, it’s possible they’re doing that to you, too.

13. They Act Fake When You Share Good Things That Have Happened In Your Life

You have some exciting updates to tell your friends, but when you say the words you’re immediately met with smiles faker than a Gucci handbag from a guy on a street corner. This isn’t a once in a blue moon thing, either — it happens every time. Catchings says there are certain facial signs you can identify as jealousy in this situation. “Look for fake smiles, rolling eyes, or lack of eye contact,” she says.

When you tell them things about your life, their faces might be placid and delightful — but their bodies might tell another story. “Observing your friend’s body language is an easy way to detect envy,” Catchings says. Maybe they cross their arms, turn slightly away from you, or overdo it with the hugs and closeness so that you start to feel a bit smothered.

15. They Avoid You, Particularly After Good Things

Maybe they’ve done all the celebrating with you — but now they can’t be found. “Avoiding you and not wanting to spend time together can be a sign of jealousy,” McBain says. Seeing you creates difficult and negative feelings for them, so they’re attempting to deal by dashing in the other direction, rather than taking it out on you.

16. Their Compliments Are Actually Insults

A backhanded compliment — one that looks like praise but actually contains an insult — is a common sign of jealousy, Catchings says. “This makes them think that they are in control, but in reality, they are suffering and afraid.”

17. They Are Always Discouraging

Jealous people are likely to focus on telling you why you can’t do something, versus telling you why you can. “A truly terrible ex-mate told me not to bother applying for college masters programs because I wouldn’t get in and would end up disappointed,” Sabrina, 29, tells Bustle. “I applied, and then they got mad at me when I was accepted!”

A final sneaky sign of jealousy in friends is that they are not supportive of you. Really in need of a listening ear, but every time you can’t track down your friends at all? A true friend will want you to succeed and to be happy… and they’ll be there for you, too.

Envy doesn’t always have to mean a friendship is over. Bringing the issue to the table with them — and explaining why it makes you upset — is the way to makes strides toward rectifying the problem. By bringing it to light, your friends might begin to think twice before making comments and acting in ways that leave you feeling badly and torn down. McBain also suggests exploring the issue in therapy, so you can figure out strategies to deal with your friend’s needs and how to leave the friendship if you need to.

If the signs of jealous friends seem to hit home hard for you, it might be time to take action. Just remember to be candid with them, and you can start making moves to diminish the issue, and in turn, better the friendships.

More like this
12 Ways You're Sabotaging Your Love Life
By Teresa Newsome and Lexi Inks
Is It A Rebound Relationship Or The Real Thing?
By Carolyn Steber and Lexi Inks
Are Quality Time & Physical Touch Love Languages Compatible?
By Lexi Inks
The 3 Most Calm Zodiac Signs, According To Astrologers
By Kristine Fellizar
Get Even More From Bustle — Sign Up For The Newsletter

This article was originally published on June 21, 2016