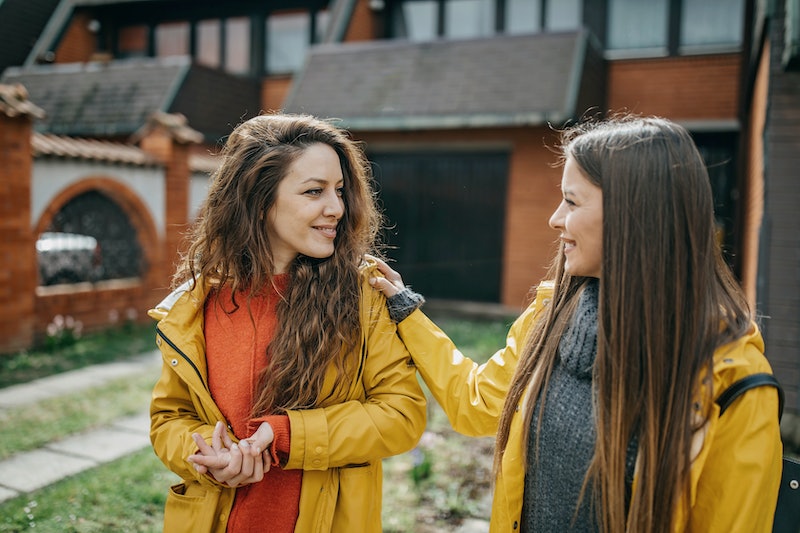 We've all been guilty of giving compliments that turn out to be less-than-sincere upon closer inspection. However, backhanded "compliments" from your friends are some of the most hurtful — it's important for friends to be honest with each other, of course, but couching hard truths in fake compliments is rarely the way to go. (Unless you're auditioning for a Real Housewives franchise, of course, in which case you can carry on.) The most well-disguised insults out there, these kinds of remarks may not register as negative until hours later, when their double meaning suddenly hits.

“Backhanded compliments can be very damaging,” says Sherese Ezelle, L.M.H.C., a licensed behavioral therapist at One Medical. They usually stem from a person’s insecurities about themself, Ezelle explains, but that doesn’t make it OK when your friend projects those things onto you. Sometimes, the giver of the so-called "compliment" might not realize they're being hurtful, but unfortunately, others know exactly what they're saying.

Backhanded compliments can range from just plain rude to a form of microaggression, Ezelle says. She suggests disputing them in the moment if possible. “More often than not, to challenge them on the spot allows for the individual delivering the ‘compliment’ a chance to defend or further explain their intent,” Ezelle tells Bustle. “You want to be sure to give an opportunity for a conversation so that growth can happen and friendships can be preserved.” When your friend hits you with a “Wow, I can’t believe you got that job,” Ezelle recommends being both sincere and direct. “I appreciate that,” she suggests saying. “I worked very hard and I’m glad my hard work paid off.”

Of course, different friendships have different dynamics — some people’s love languages are all about teasing their loved ones mercilessly. But Ezelle says that it’s alright to recognize when something feels more hurtful than funny, more like passive-aggressiveness than actually silly banter. And if backhanded compliments at you seem to be a habit rather than an exception, you can always tell your friend to buzz off.

These 15 backhanded compliment examples can help remind you of what a barely concealed dig really sounds like. The next time your friend says she loves how you’re dressed today, you’ll know what they’re really getting at.

"Well, Half Your Outfit Looks Fabulous."

If you're getting ready together, chances this comment is constructive; your friend is probably just trying to prevent you from a fashion disaster — or, well, half of one. Once you walk out the door, however, there's nothing you can do to change the non-fabulous part of your outfit, and you're left feeling self-conscious about your clothes.

On the one hand, it's good to know all your careful filtering and captioning hasn't been in vain. But when your friend says your Instagram seems fun, they're implying that the real you is much less glamorous than the image you're trying to project. Talk about rude.

Because they... didn’t expect you to be? Calling someone articulate is a way to signal that the person doesn’t seem or look smart to begin with, so it’s surprising that they’re presenting themself so well. The “you’re so articulate” comment comes with a long history of racism, especially aimed at Black people — so this one really has no upside.

"I Didn't Expect You To Get The Job — Congratulations!"

When a friend makes a point of mentioning their low expectations, it takes away from their congratulations. Thanks, I guess?

"You're So Independent — It's No Wonder You Haven't Found Anyone Yet."

Among all the things ambitious people are tired of hearing, this is probably the most common. In theory, such a remark compliments your sense of autonomy; in practice, it implies that your independence is driving potential significant others away. As an added bonus, it perpetuates the idea that you'll have to compromise your sense of independence in order to be attractive. Yikes.

"I Love How You Don't Care How You Come Across."

Your friend may profess to love your supposed devil-may-care attitude, but they're really saying that you're acting like a total weirdo. If you thought you were being smooth, this kind of comment can seriously burst your bubble.

"I Wish I Was As Chill As You About All The Clutter."

Translation: This place isn't cleaned to my exact standards, and I don't know how you stand it.

“That New Haircut Suits You So Much Better Than Your Old One.”

They’re right — you new ‘do looks fabulous. But no need to be rude about what you looked like literally an hour ago.

“You're So Charming When You Make An Effort."

Great! You’re being charming and suave right now. Mission accomplished. But... what about when you’re lounging in your soft pants? Your friend is kind of saying that you're not usually this charismatic. Ouch.

“You Look So Professional With Your Hair Straight.”

Talk about microaggressive “complimenting” styles. When natural hair gets coded as unprofessional, you can always answer — in your head, out loud, or in a text with a real friend afterward — with, “Well, I’m glad to know that you think my natural hair makes me look so unprofessional.”

"I Wish I Didn't Have Any Responsibilities Like You."

People might be inclined to say this to their friends who live with their parents, or to those who don't have kids. Living rent-free or child-free is certainly less stressful than the alternative, but that doesn't mean anyone's life is totally carefree or without responsibilities. Saying otherwise is passive-aggressive at worst and presumptuous at best.

“Your Place Is So Cozy.”

Having a cozy night in with your partners is lovely — but having your apartment be called “cozy” as code for “super tiny” isn’t necessarily what you want to hear when you’ve invited folks over for a housewarming.

“You’re Coping So Much Better Than I Thought You Would.”

You’re literally on your couch in a onesie surrounded by tissues and rubbing at your puffy eyes — and this is better than what your friend thought? How did they expect you to deal with the breakup? You might not want to know. Thanks for the confidence, pal.

“I Would Never Be Able To Pull Off That Outfit.”

Because it’s... so ugly? Your choice to match cargo pants with a football jersey was deliberate, thank you very much. It’s called the ‘90s.

"You Look So Much More Awake With Makeup."

Your friend may be trying to give you a compliment, but this kind of comment ends up implying that you look tired whenever you aren't wearing makeup. Then again, considering that this is the oldest backhanded compliment in the book, your friend might just be judging you.

This article was originally published on Jan. 20, 2016