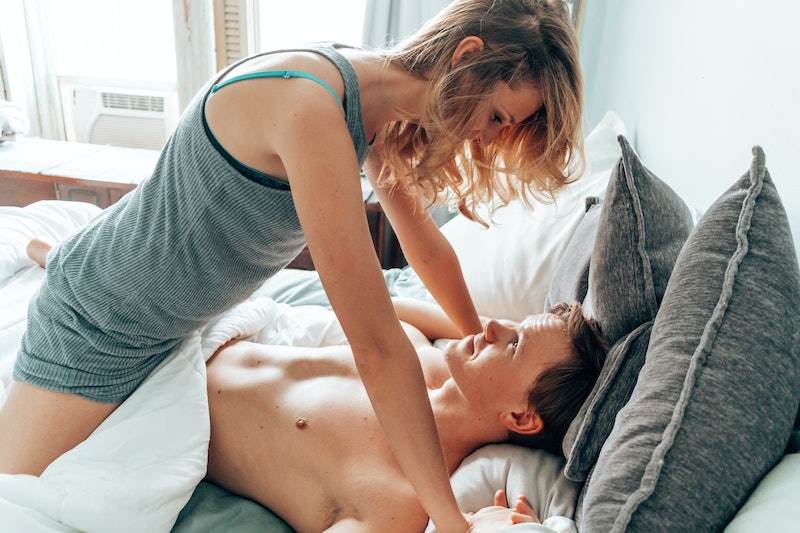 When I think about the first time I had oral sex, I remember it being as disappointing and awkward as it was hilarious — and I don't think my story is a unique one. The truth is, there's just a lot of things no one tells you about oral sex. If you've ever given or received oral sex, then you already know that doing it for the first time comes with more than a few surprises. Some of these unexpected findings are pleasant ones; others, not so much. Regardless, there are a lot of things about it that you can only learn from experience.

Though I think I'm pretty skilled at the act of giving head now, and I genuinely enjoy doing it, it's only because I've had plenty of practice. But lots of sex education passes right over it. Romance novels and movies would have us believe that receiving oral sex results in multiple orgasms, typically within five minutes. The majority of PIV porn makes giving head to a partner with a penis look straight up painful and degrading. None of these depictions are accurate (and also, no one bothers to tell you that giving head for very long at all will make your jaw sore the next day).

So if you've never had oral sex and you want to know what to expect, or you're an oral sexpert who wants to remember what it was like when you first started out, then read on. Here are 13 things no one tells you about oral sex.

1. Oral Sex May Be Difficult To Perform In The Beginning

Hey, you could be the one person in history who's a champ at oral sex after their very first time. Realistically, though, you're probably not going to have any idea about what you're doing in the beginning, even if you've studied a lot. Whether you're giving oral to a partner with a penis or vulva, your mouth, throat, and jaw are doing all sorts of things that they've never done before. So don't be upset if you're not a head-giving rock star when you're just starting out. There is definitely room to learn and grow.

Maybe someone told you this prior to your first experience with oral, but no one told me — and I wish they would have. Although I've never had oral sex with a partner who has a vulva, I can tell you from experience that giving oral sex to my partners with penises has generally been super fun, and I never expected that.

“People sometimes think of giving oral sex as somehow degrading, but actually it is a great way to honor your partner and convey your love,” Mark Michaels, a sex educator and co-author of Partners in Passion, A Guide to Great Sex, Emotional Intimacy and Long Term Love. Even if you’re not in love, it’s still a great way to show affection for someone you’re having sex with.

Before I ever had oral sex with a partner with a penis, I viewed giving head as something people endure during sex out of the kindness of their hearts — it's what people and popular culture told me. In actuality, unless my sexual partner gets too aggressive during the act, giving head can be a very serious turn on. I love making my partners feel good, and the feeling of being in charge for a little bit.

3. It's Probably Going To Take A Long Time To Orgasm From Oral Sex

Of course, this isn't always the case, and everyone's different. But before I started having oral sex, I had no idea how long it can take people to achieve orgasm this way (it takes me at least 30 minutes when I'm receiving, and I have definitely had other partners in the same boat). I'm not saying you shouldn't go for the big finish during oral sex, because it's a pretty awesome experience whether you're giving or receiving. But there's a reason oral sex is often just a warm up instead of being the main event.

4. Some People Have A Difficult Time Achieving Orgasm During Oral Sex

And for some, a climax just isn’t on the table. Not everyone can (or wants to) climax from oral sex. Some people with vulvas need internal penetration to orgasm, and people can simply have a really hard time relaxing enough during oral to achieve orgasm. Personally, oral is one of the few ways I actually can have an orgasm during sex; but that doesn't mean it happens for me every time, either. So if you or your partner can't seem to orgasm during oral sex, no matter how long the two of you spend on each other, and no matter how well you communicate what you want during oral, don't stress out about it. You're not bad at sex, or doing something wrong; some people are just built differently.

5. Sometimes Oral Sex Is More Work Than It's Worth

Most of the time, I love both giving and receiving oral sex. That said, it is a lot of work. And for me personally, that remains true even when I'm the one on the receiving end. I obviously can't speak for all people, but in my experience, orgasming from oral sex requires a lot of concentration. Some days, oral sex just doesn't sound relaxing, and sex really shouldn't feel like a chore — so if you're not in the mood, you shouldn't feel guilty for skipping it.

6. Giving Oral Sex Can Be Empowering

You wouldn't know it from watching porn, but deep throating isn't required in order to have oral sex with a penis. If you are interested in it, know that it takes practice, and that gag reflexes are hard to tame. The first time I tried it, I wasn't prepared for the whole gag reflex thing, and I hated everything about it. Now that I've had some practice, though, I think it can actually be really fun. There are some definitely some tips and tricks to make it feel much better for your and your partner if you’re interested in mastering the skill of deep throating.

It's also totally fine though, if you never find it fun. It's 100% optional, and no partner worth having will try to guilt or shame you if you're not interested in doing it.

8. It's OK If You Don't Dig Receiving Oral Sex

Oral sex gets a lot of hype, and for me, the hype is totally true. But it's OK if you just aren't into it, because everyone's different. If you're not feeing it, simply let your partner know by communicating what it is that turns you on. And if you're still not sure what that is either, experiment with your own body and find out on your own what you like.

Of course, if you do want to become more comfortable with receiving oral, that’s a process that make take some time, but it’s not impossible.

9. Swallowing With A Partner Who Has A Penis Isn't Always Gross (Or Mandatory)

I like swallowing, and I know a lot of other people who do, too. When I started having oral sex, I expected to find it off-putting; so I was pleasantly surprised to find that swallowing isn't always gross. But know that swallowing — like so many other parts of oral sex — is completely optional, and only something you should try if you're interested and comfortable with it.

10. Oral Sex Isn't All About The Mouth

Despite what the name implies, good oral sex usually involves a certain amount of eye contact, as well as some manual stimulation.

“Looking someone in the eye and having them return your gaze can be a deeply vulnerable and connecting experience,” Vanessa Marin, a licensed psychotherapist specializing in sex therapy, previously told Bustle.

But just like every other aspect of oral sex, this usually depends on your partner's preferences. And if your experiences with oral sex have been anything like mine, this is probably something you had to learn on your own.

11. Giving Oral On Your Knees Can Be The Worst

Giving oral on your knees may look sexy — in movies and in real life — but it may not feel sexy for everyone. I mean, unless you're on some thick carpet, it can be downright uncomfortable (and even then, it can be a lot to deal with that much weight on your knees). This is even truer if your partner is super tall, because then you have to deal with weird neck pain, too. Which brings me to...

12. Both Giving & Receiving Oral Sex Can Make You Feel Sore In Unexpected Places

Depending on what position you give or receive in, this sex act can make your entire body sore the next day — in places you might not be prepared for. At least, that's been my experience. When I give oral for an extended period, my jaw, neck, and mouth are usually sore the next day. And when I receive it? I might be sore everywhere the next day, because receiving oral makes my muscles tense up all over, and then relax all over in the best way (to me, it's still worth it).

13. There's More Than One Way To Be Good At Oral Sex

I used to be really insecure about giving oral sex, because I was worried that I wouldn't be good at it. Now that I've been doing it for a few years, though, I've realized everyone's oral sex style is slightly different — there are tons of different techniques and positions you can try.

There's no one way to be good at oral sex, and if you genuinely care about your partner's pleasure, and you're OK with both taking and giving directions during oral, then everyone involved is probably going to have a good time.

Mark Michaels, a sex educator and co-author of Partners in Passion, A Guide to Great Sex, Emotional Intimacy and Long Term Love.

This article was originally published on April 20, 2016