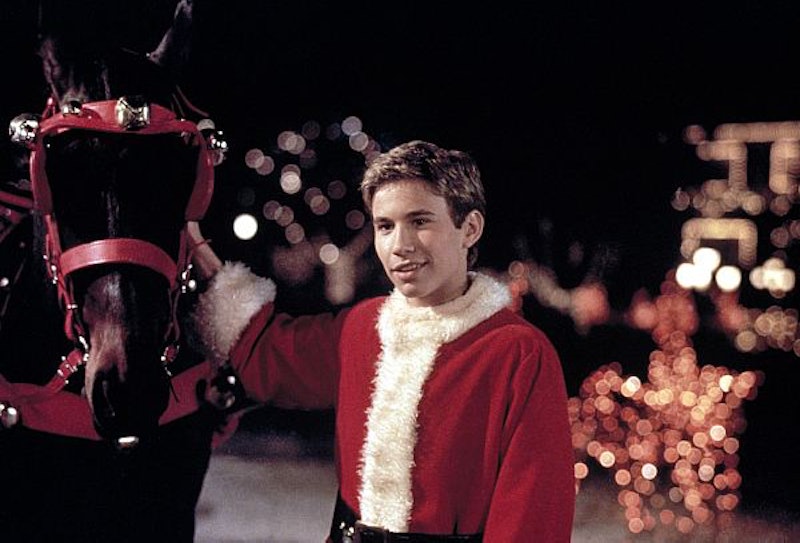 This may just be my nostalgia talking, but the holidays in the ‘90s were the bomb. I might have been an angsty Daria-wannabe adolescent most of the time, but as soon as the local mall put up its fake evergreens and twinkle lights, I was hella psyched. TGIF holiday specials? Check. Shopping for the perfect holiday plaid skirt-and-knee-socks combo from Contempo Casuals? Check. Looking forward of two whole weeks away from school? Check, check, check FOREVER.

Obviously, the best parts about the holidays in the 90s were the intangibles: spending time family, spreading joy and love, feeling grateful for all of the wonderful people in our lives, and so on. But that doesn’t mean that the more superficial stuff — from boy band holiday albums, to the latest in toy technology, to Christmas-themed breakfast cereal (yes, that is a thing) — didn’t also have a hand in making those distant memories sweet. There’s a lot about the holidays in the 90s that was legitimately cool, and a lot that was, in hindsight, really weird, but through the lens of my adult disenchantment and nostalgia for simpler days, it all seems pretty great.

Can we recapture the joy and innocence of youth by bringing back our 90s holiday traditions? Well, it couldn’t hurt right? Keep reading for 12 traditions that made the holidays in the 90s all that and a bag of chips.

1. Getting nostalgic for the holidays of the 80s.

OK, I get that this may sound ridiculous, but hear me out: For many adolescents and teens in the 90s, the holidays carried with them a lot of nostalgia for the 80s — the time when we were little kids. In my house at least, Christmas in the 90s meant watching holiday specials and movies from the previous decade that we'd taped off of TV. (Remember the He-Man & She-Ra Christmas special? Yes, He-Man dressed as Santa, and, no, I don’t remember why, but I do remember that it was awesome.)

Some of my fondest Christmas memories from the 90s involve 80s stuff that made its way into our 90s household, like plastic Care Bear and Strawberry Shortcake ornaments, and ornaments my sisters and I had made in preschool from construction paper and glitter. (And now I'm having nostalgia about feeling nostalgic then, which means that here I am in 2015, feeling nostalgic for the 90s, when I felt nostalgic for the 80s. Which means that I have entered a multi-dimensional nostalgia vortex from which I may never, ever return).

Hallmark Keepsake Ornaments were around long before the 90s, and they are still around today. (This year’s batch, unsurprisingly, features quite a few Star Wars ornaments.) But if you had a Christmas tree in the 90s, chances are you had a few of these ornaments hanging from its branches. Personally, I associate the entire line with a single, kickass ornament, released in 1992: The Star Trek Shuttlecraft Galileo. Guys, it lights up AND has sound effects. I realize that with today’s technology, you could easily rig a tree ornament that could light up, speak, tweet, give GPS directions, and order a pizza, but back in the day, this Trek ornament was by far the coolest thing to grace our tree.

Adam Sandler’s latest venture may not have impressed many (or any, if current reviews are anything to go by), but the comedian’s Chanukah anthem became an instant holiday classic when he first performed it in 1994. In the years since, Sandler has updated the song four times to include more prominent Jewish celebs, but the core has remained the same: “Chanukah is the festival of lights/ Instead of one day of presents, we have eight crazy nights!”

4. Wanting a boom box SO BADLY.

Are boom boxes still a thing? I’m not sure, but in the 90s, angsty preteens wanted nothing more than their very own CD players, so that they could express their existential despair by blasting Nirvana and Alanis Morissette at full volume. Today’s iPods just don’t say “Nobody understands me!” in the same way.

In the 90s, the American Girl dolls each had a Christmas story (A Chanukah-celebrating historical doll didn’t show up until 2009). The catalogue sold each doll's special Christmas outfit and Christmas accessories, as well as human-sized Christmas clothes and accessories to match. I was fortunate enough to have a Kirsten doll, and I spent every Christmas begging my mom to make me the human version of Kirsten’s Christmas outfit, which included a head wreath with real candles sticking out of it. My mother always refused, assuming — probably rightly —that I would only end up setting my head on fire.

But I still want one.

The 90s produced some holiday movie gems (like The Nightmare Before Christmas and The Muppet Christmas Carol) and some that were… whatever the opposite of gems are (coal?), like Jingle All the Way and I’ll Be Home For Christmas, starring 90s teen heartthrob Jonathan Taylor Thomas. (True fact: When I was in 7th grade, there was a clique of girls who regularly walked around school with “JTT” written on their cheeks. I did a lot of ridiculous things as an adolescent, but I am not mad that I was never part of that clique.)

The indoor mall seems to be becoming a thing of the past, but in the 90s, it was the coolest (and, in my hometown, the only) place to shop. Back then, holiday shopping usually featured listening to holiday pop music reverberating throughout the building, trying to avoid the area of the mall where little kids crowded around Santa, and visiting the food court to buy slices of giant cookie.

In contrast, this year, I’ve done all of my holiday shopping while sitting on couch wearing pajamas, computer in my lap and glass of wine in hand. Which is, let’s be honest, ridiculously better than navigating a mall. Maybe mall shopping isn’t a 90s tradition we should bring back. This whole “shop without leaving the comfort of your sofa or your wine box” thing is pretty sweet.

8. The Delia’s catalogue was ALL.

The one exception to shopping at the mall was shopping from the giant stack of catalogues that would arrive on your doorstep every day from October onward every year. For an adolescent or teen girl in the 90s, the Delia’s catalogue represented the zenith of all human desire and longing. Kids of the 90s everywhere cried out in unbelieving horror when Delia’s shut down this past spring. (Thankfully, the company has since relaunched as an online store).

9. The innocence of early online shopping.

For many of us, the late 90s saw our first forays into the terrifying world of online shopping. The first time I bought something via the Internet, it seemed like a really strange, uncertain thing to do; even after completing my order, I wasn’t convinced that my purchase would ever actually arrive (It did). OH how things have changed, amirite?

Fun fact: The Internet got its first test run on Christmas day, 1990. Who then could have predicted the way the web has changed the world?

Until only a few days ago, Mariah Carey’s 1994 hit “All I Want for Christmas is You” had been the number one holiday song in America for 20 years, but Carey was far from the only pop star to make holiday albums in the 90s. *NSYNC, Hanson, Celine Dion, Boyz II Men, No Doubt, the Spice Girls, the Backstreet Boys, and the Smashing Pumpkins (YES, that really happened) all got in on the holiday action.

The 90s had a number of years when mania over a particular toy shook the nation and brought parents everywhere to their knees. I’m not saying I want to bring this tradition back, per se, but these toy catastrophes were fascinating to watch back then — that is, if you weren’t one of the parents getting in fist fights and paying thousands of dollars to give their kid a Tickle Me Elmo in 1996. The madness returned in 1998 over Furbies, furry toys that boasted a computer chip and the ability to speak 200 words of “Furbish.” Over time, they would “learn” to speak English.

With that as a segue, I’m going to go on a bit of a tangent here, because this is so amazing I can’t not share it: Did you know that, in the late-90s, U.S. intelligence agencies were actually concerned that Furbies could be a threat to national security? In 1999, the toys were banned from the National Security Agency premises in Maryland. In ads, Furbies were portrayed as having the ability to “learn” English over time, which led NSA officials to assume that the Furby contained a recording device that could record words spoken to it and repeat them back. The NSA was thus worried that if someone brought a Furby to work, the toy might then record classified information and repeat it elsewhere.

It turned out that Furbies didn’t contain recording devices after all; they were simply preprogrammed with both English and Furbish words. The president of Tiger Electronics, Roger Shiffman even issued a statement declaring, “Furby is not a spy!”

I realize that this isn’t exactly a “tradition,” but Ross Gellar as the holiday armadillo is, IMHO, the greatest things Friends ever achieved. And I know that you Friends fanatics out there might argue that “The One with the Holiday Armadillo” aired in 2000 and therefore technically doesn’t count for this list, to which I have three responses: (1) Friends is the quintessential 90s sitcom, regardless of when an episode actually aired, (2) It is a HOLIDAY ARMADILLO. Every decade should have one of those, and (3) Close enough. Also, did I mention that it’s a HOLIDAY ARMADILLO?

More like this
25 Quotes About Love To Share During Pride Month 2022
By Madeleine Aggeler and Emma Garza
Remember These Ancient Pieces Of '90s Tech?
By Lucia Peters and Emma Carey
11 Trends From The ‘90s That Made You Feel So Cool
By Julie Sprankles
The Juiciest “Would You Rather” Questions For Couples
By Alice Broster and Rachel Mantock
Get Even More From Bustle — Sign Up For The Newsletter