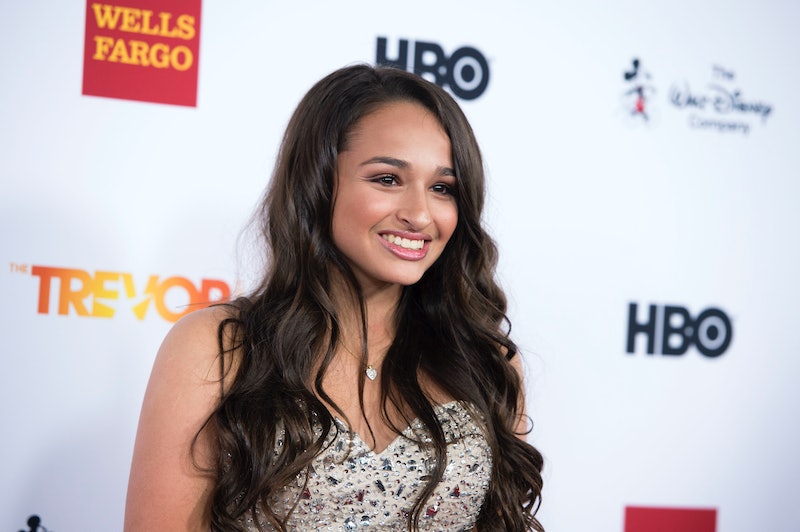 If this year's Golden Globes nominations are any indication, the media has become significantly more accepting of the transgender community. From Jeffrey Tambor's nom for Transparent to Eddie Redmayne's role in The Danish Girl , storylines about trans individuals are up for some of the biggest awards. While there is plenty to celebrate here, it'd be naive to ignore the fact that there is still work to be done. Considering those two characters were played by cis male actors, it's not the same as transgender actors being nominated. Nevertheless, it is still a huge step forward. Other milestones happened this year — from Laverne Cox posing in Allure 's Nudes issue to Caitlyn Jenner winning an ESPY Award. Something else noteworthy? Back in January, President Obama became the first president to use the word "transgender" in a State of the Union address.

Amidst these highlights, it would be unfair to not acknowledge a very serious statistic: 2015 was a record year for anti-transgender violence. A report from the Human Rights Campaign in November showed that there were more transgender murders reported than in years past. This is undeniably devastating, and it also highlights why featuring trans individuals in the media is so important. When people can better understand the stories of all kinds of people, it creates an atmosphere of acceptance and understanding.

Looking back on 2015, there are plenty of accomplishments to celebrate in the trans community. Here's a recap of the year's major trans moments in media.

Although it caused a bit of controversy, Jenner graciously accepted the Arthur Ashe Courage Award at this year's ESPYs. In her moving speech, she talked about how trans people deserve respect and shined a spotlight on the devastating violence they face.

2. And She Landed The Cover Of Vanity Fair

Let's not forget when Jenner introduced herself to the world with a stunning magazine cover and eye-opening interview. In doing so, she received support from fellow celebrities, fans, and family members alike. Sure, there was a fair share of haters, but the overall response was predominantly positive.

Although Cox initially turned down Allure 's request, her reason for participating in the shoot is beautiful. She told the magazine,

I'm a black transgender woman. I felt this could be really powerful for the communities that I represent. Black women are not often told that we're beautiful unless we align with certain standards. Trans women certainly are not told we're beautiful. Seeing a black transgender woman embracing and loving everything about herself might be inspiring to some other folks. There's beauty in the things we think are imperfect. That sounds very cliché, but it's true.

Not cliché at all! Instead, Cox's statement is incredibly eloquent and powerful.

4. And She Starred On Entertainment Weekly's LGBT Cover

It was a year of multiple magazine shoots for Cox. She starred on the front of EW 's LGBT issue dressed as the Statue of Liberty. It's a fitting outfit for the Orange Is The New Black star, who just like Lady Liberty represents freedom — the freedom to be yourself.

5. Jazz Jennings Got Her Own TLC Series

This 15-year-old is an outspoken trans activist. Jennings began as a YouTube star and landed her own series on TLC called I Am Jazz . The show follows her personal life and show she's no different than other teenagers her age. (Unless, of course, you're talking in terms of coolness; in which case, she definitely surpasses the average teenager.)

6. And Became A Clean & Clear Spokesperson

Earlier this year, Jennings became the face of Clean & Clear's #SeeTheRealMe campaign. She's a perfect choice! As she says in the video, "The real me is happy and proud to be who I am. And I'm just having fun being one of the girls." In the short clip, she also touches on what middle school was like and overcoming bullying.

7. Transparent Received The Recognition It Deserves

If there's one reason to download Amazon Prime, it's so that you can watch Transparent. The show, created by Jill Soloway and based on her own familial experiences, is beyond brilliant. It's moving and honest, but also will make you laugh at points.

At the 2015 Emmys, Soloway won Outstanding Directing for a Comedy Series. When winning, she dedicated the award to her "Moppa," who she also referred to as a goddess. The show also took home the Golden Globe for Best Comedy or Musical Series. Considering Transparent Season 2 debuted in December, there are probably plenty more awards where those came from.

In 2015, Tambor took home a Golden Globe and an Emmy for his role as Maura on Transparent. But the best part of all of this? He dedicated his award to the transgender community. He said,

Such an important statement from Tambor! And as anyone who's seen the show can attest, his awards were definitely well-deserved.

9. The Danish Girl Became One Of The Year's Most Talked About Movies

Eddie Redmayne's role in The Danish Girl — where he plays Lili Elbe, one of the first-known recipients of surgery to treat gender dysmorphia — has already earned him a Golden Globe nom and generated plenty of Oscar buzz. When discussing the movie at the Toronto Film Festival, Redmayne hit the nail on the head and said, "The need for cisgender people to understand what trans people have gone through is huge and incredibly important."

While there's undeniably still a ways to go, hopefully this is just the beginning of a long-overdue atmosphere of acceptance for trans individuals in the mainstream media and beyond. As proven by the examples above, their work is worth celebrating and their stories are worth telling.

More like this
'Heartstopper’s Kit Connor Revealed Why He Doesn't Label His Sexuality
By Nola Ojomu
'Heartstopper’s Joe Locke Has A Sweet Message For Queer Fans
By Sam Ramsden
Jake Daniels Just Became The UK’s First Active Football Player To Come Out As Gay Since 1990
By Sam Ramsden
Sandra Bullock, Girlboss Extraordinaire
By Matt Harkins & Viviana Olen
Get Even More From Bustle — Sign Up For The Newsletter