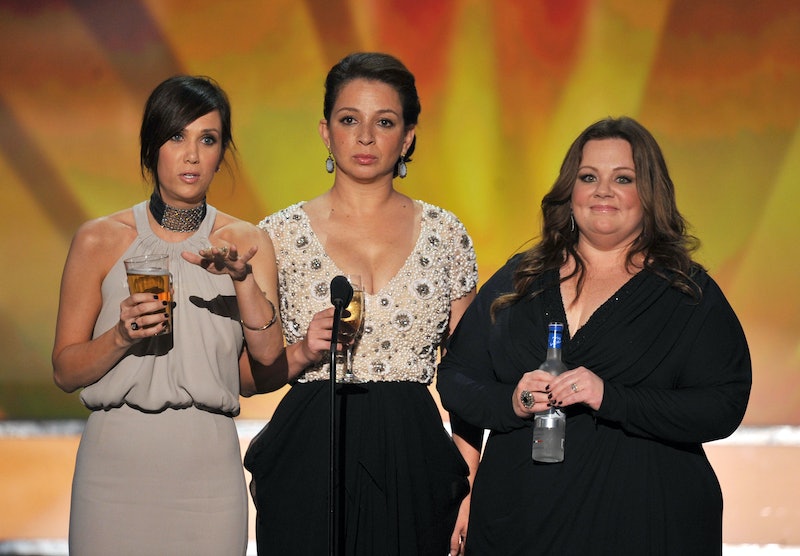 There are a lot of blockbusters, remakes, and sequels coming out in 2016 (many fall into more than one category), and according to Fandango, that's what the people want. Deadline reports that the movie ticketing site polled users on the most anticipated movies and performances of 2016, and, no surprise, Rogue One: A Star Wars Story, ranks number one on the list of films. Unfortunately none of the top ten anticipated movies has a female actor as the lead, except for Finding Dory , the sequel to Finding Nemo starring Ellen Degeneres. I am excited for the new Pixar movie because it's always healthy to have a good long cry, but it's disappointing that the films on this list are all led by males.

And this isn't totally the viewers' fault. Hollywood got blasted in 2015 and will continue to in 2016 for its dearth of progressive female films, though there are several to be excited for in 2016. Actors like Emily Blunt and Melissa McCarthy are poised to have a hell of a year, and they did make the list of the most anticipated female performances for The Girl On The Train and Ghostbusters, respectively.

The top ten anticipated films are, in order:

1. Rogue One: A Star Wars Story

3. Batman vs. Superman: Dawn Of Justice

Though the films users are most excited about overall are all male-led, there are individual categories for Most Anticipated Male/Female Actors and their performances. Melissa McCarthy has fans most excited on the list of female actors for her sure-to-be memorable performance in Paul Feig's lady-led Ghostbusters reboot. Then, in order, are Scarlett Johannson in Captain America: Civil War, Jennifer Lawrence in X-Men: Apocalypse, Emily Blunt in The Girl On The Train, and Charlize Theron in The Huntsman: Winter's War.

Aside from Ghostbusters and The Girl On The Train, the rest of the anticipated female actor performances are in superhero movies where the female roles are often criticized of being incidental or lazily sexist. Though Johannson, Lawrence, and Theron are all powerful characters in their respective superhero movies, they're still not female-led films by any means. The X-Men movies have redeemed themselves more than the others, and Apocalypse has a solid throng of female mutants. Lawrence returns as Mystique, Sophie Turner plays a young Jean Grey, and Lana Condor, an Asian-American actor, is joining the cast as Jubilee.

And even though it's to be expected that major blockbusters would dominate the list of most-anticipated for movies, blockbusters should not only include male-led films. Ghostbusters is sure to rake in the dough, but even with the legacy of the beloved original 'Busters and the excitement for the stellar cast including Kristen Wiig, Leslie Jones, and Kristen Stewart, it's not on the list. It's great that Melissa McCarthy's performance is awaited impatiently, but why isn't the Ghostbusters starring women the list of the most anticipated? Is it because it's a "girl movie?"

One blockbuster movie missing from the general list of ten is The Huntsman: Winter's War, which is a disappointment, because it's strikingly female-led. Though it's title is all about Chris Hemsworth, it stars Charlize Theron, who is joined by Jessica Chastain and Emily Blunt, all playing icy adversaries to the Huntsman. Can a movie with three strong female antagonists turn people off that much?

There are other performances by female actors that have been getting tons of buzz that didn't even make the anticipated performances, like Natalie Portman in Jane Got A Gun, and most notably absent, Gal Godot as Wonder Woman in Batman Vs. Superman: Dawn Of Justice. Emily Blunt's performance in The Girl On The Train is one of my personal most anticipated films of the year, and again, it didn't crack the top ten.

There are so few women in the most anticipated films of 2016 that I don't even have the energy to decry the complete lack of women of color. Zoe Saldana is always amazing and perfect as Uhura in Star Trek, so there's no doubt she'll do it again, but that is barely an offering. There is a new hope for Star Wars, though: The Force Awakens has not only made more money than any other installment in the franchise, but it was the most progressive Star Wars yet, not only for its powerful female protagonist Rey (Daisy Ridley), but for its heroes being men of color. Rogue One will hopefully continue that trend upward.

Don't let this list fool you: there are plenty of films in 2016 to be excited about with women behind or in front of the camera. Besides the big ones like Ghostbusters and The Girl On The Train, there's also Bridget Jones' Baby, Maggie's Plan, Pride And Prejudice And Zombies, and My Big Fat Greek Wedding 2.