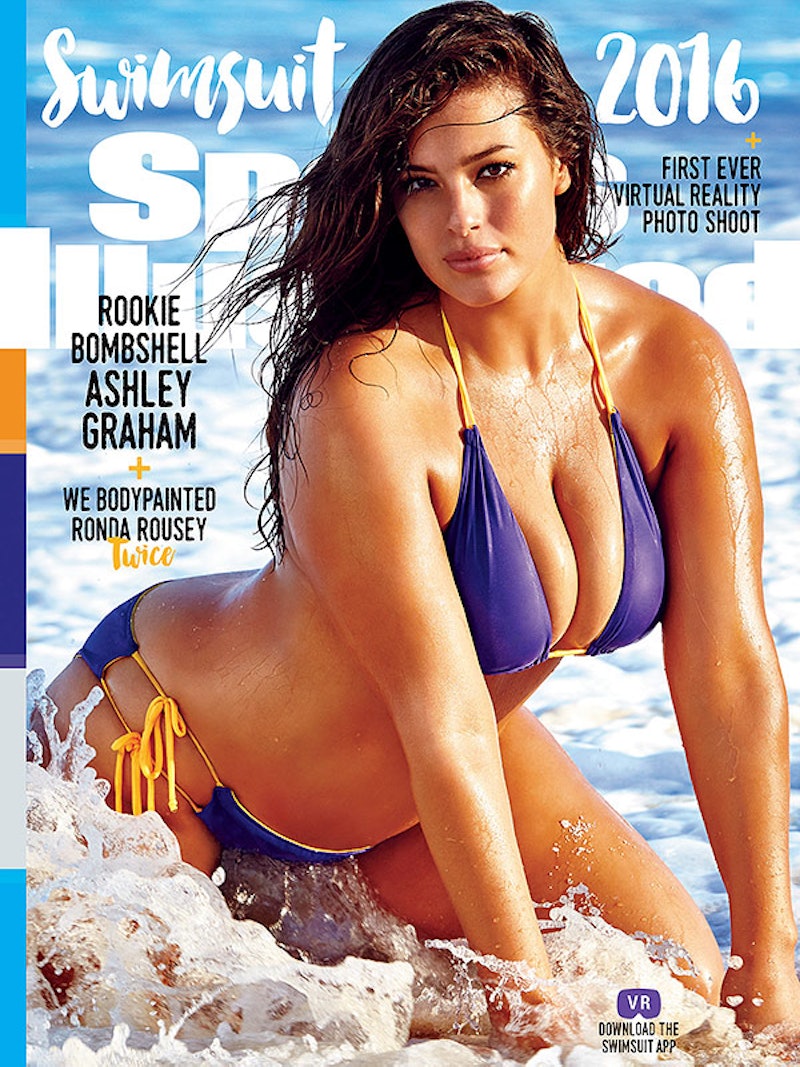 In the moments leading up to the 2016 Sports Illustrated Swimsuit Issue cover reveal, I knew this was going to be one of the most body positive editions of publication to ever hit magazine racks. Plus size model Ashley Graham, British Ghanaian model Philomena Kwao, and mature model Nicola Griffin were set to feature in swimsuitforall's #SwimSexy ad within the pages. Graham had even landed an editorial. And longtime curve model Robyn Lawley would also be reemerging in an editorial spread for the second time in two years. But the news that Ashley Graham would land a cover spot alongside mixed martial artist Ronda Rousey and conventionally gorgeous straight size model Hailey Clauson? That was something else entirely.

You see, it's one thing for the Swimsuit Issue to put a model who's visibly above a size 8 in its advertisements — even in its editorials. But as a cover girl? I never thought I'd see the day. Does a part of me wish Sports Illustrated had been even more radical still, perhaps including plus size models who identify as fat and are above a size 22, or highlighted more diversity still in terms of skin color, physical ability, gender presentation, or body shape? Absolutely. However, this is Sports Illustrated we're talking about. The Swimsuit Issue feels like the crème de la crème of modeling gigs, with covers that have featured the legendary Tyra Banks, Brooklyn Decker, Kate Upton, and Chrissy Teigen. It has followed the mold of conventional beauty since the issue's launch in 1964. Yet here we are, seeing a renowned plus size model land that cover spot. That has to mean something good.

What I particularly love about about Graham's cover is that it's accompanied by the tagline "Ashley Graham In All Her Glory." There is no mention of her position as one of the world's most famous plus size models. There is no mention of her body type at all. She's just there, chilling with Rousey and Clauson in a way that is completely normalized. And at the end of the day, isn't that what body positivity is fighting for? For an eventuality in which models are allowed to just be models, and body size doesn't factor into casting or talent scouting or the kinds of roles available to people who break traditional beauty tropes?

If you follow body positive dialogue and the plus size conversation, then Graham's is a name you probably know. I was definitely a teenager when I first started hearing it. And while I can't remember the exact moment her name made it into my Facebook timeline (or, more accurately, my MySpace feed), I do know that she was among the first women who looked slightly more like me to ever grace my media stream (along with Beth Ditto and Selena). She wasn't fat, like I was, but she was curvy. Her booty wasn't flat. Her thighs actually touched. She had cellulite and stretch marks, and sometimes those traits weren't oiled over or Photoshopped.

I know all women are real. And saying anything to the contrary is inherently flawed. But mainstream media's depiction of women isn't always real. Signs of aging, signs of fatness, signs of normality are too often air-brushed out of the images we consume. Graham, to me, was always someone who seemed more like a human being, and less like a product of Photoshop culture.

If you had told me when I was 16 or 17 that I would one day walk in a New York Fashion Week show as a plus size woman, or visit the offices of an incredible body positive brand like ModCloth to take some editorial photos, I would've laughed. I genuinely would have giggled — the thought that someone my size would ever be on a runway or in front of a camera too hysterical and impossible to register as anything other than a joke (and dark comedy, at that). But it was Ashley Graham and others like her who encouraged me to hop the train to reevaluation.

Although achieving body positivity is something that I truly believe is internal — a journey you have to take primarily on your own — having help from others along the way is invaluable. Seeing bodies like your own (or at least more like your own than the standard) be celebrated by mainstream industries helps. Seeing women who, even if only in a small way, remind you of yourself land major modeling gigs or celebrate their love for style might make your own preferences feel a little more validated.

Speaking to People Magazine, Graham said, “I thought Sports Illustrated was taking a risk by putting a girl my size in the pages. But putting me on the cover? They aren’t just breaking barriers; they are the standard now. This is beyond epic.”

Only time will tell if there is a new standard correlated to diversity. While part of me thinks that's probably wishful thinking, it's impossible to deny the shifts we're seeing in the fashion industry. So although I totally understand the reluctance to celebrate every seemingly minute advancement to hit the plus size fashion world or body positive activism, I can't help but want to celebrate this one.

We've just come out of the year when size 22+ model Tess Holliday was signed to a major agency; when Women's Health stopped using the phrases "bikini body" and "drop two sizes." So for 2016 to start with news that a plus size model — even if she doesn't look like what most everyday people might call "plus size" — landed a majorly coveted spot on a magazine cover? That feels like we're keeping body positivism going in a way that has the potential to incite long-lasting change.

MJ Day, Sports Illustrated's assistant managing editor, explained on the publication's website, "All three [cover stars] are beautiful, sexy, and strong. Beauty is not cookie cutter. Beauty is not 'one size fits all.' Beauty is all around us and that became especially obvious to me while shooting and editing this year's issue." This is only one issue of the magazine, of course. We have no way of knowing if SI will keep it up — especially if "body positivity" stops trending as a social media hashtag. We have no way of knowing if this cover is getting us closer to being able to talk about the nitty gritty of size discrimination in a way that will inspire radical and political change where it matters most. But as a fat woman, I can say that it made a difference to me.

Seeing a woman like Graham — a woman whose role as a cover star of this publication's swimsuit edition would've seemed like a pipe dream only a couple of years ago — receive all the accolade she deserves makes me feel like all the talk about body positivism is actually doing something. Maybe progress isn't happening as quickly as we would all like it to. Maybe "fat" is still considered a dirty, ugly word by much of the world. Maybe being "plus size" is often looked down upon in most social circles. But here we are: With a plus size model on the cover of Sports Illustrated despite all the hate and criticism that still abounds.

Graham is a hard worker. She's a powerful woman, a talented designer, a badass model, and a longtime icon for a lot of fellow plus size babes. Today, she's proving to this fat girl that maybe the chances of seeing someone who looks even more like me in my media streams aren't akin to pipe dreams, after all.