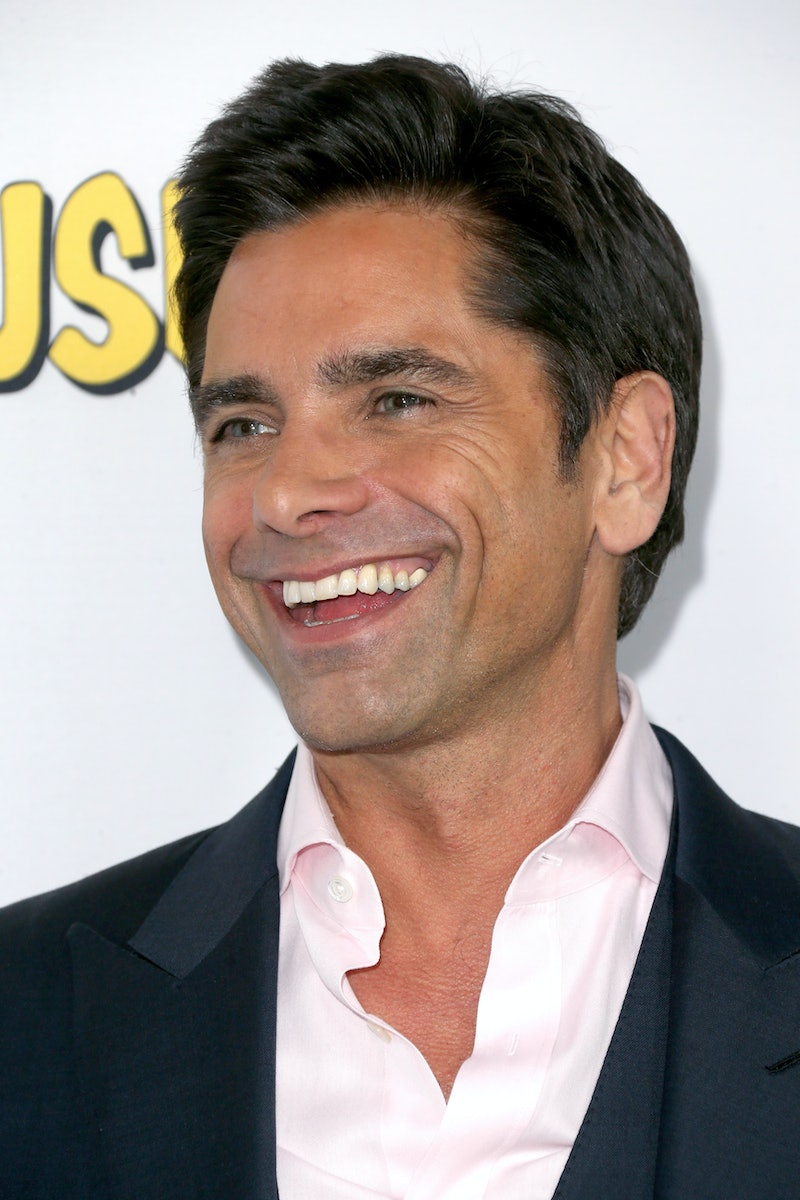 As soon as Netflix released the first trailer for Fuller House , I became a big ball of emotions. Reminiscent of that unforgettable Full House scene when Michelle Tanner cries while holding her pink bunny wallpaper, tears literally streamed down my face. Of course, it wasn't a sad tear like Michelle's. Instead, I'd say it was pretty bittersweet-slash-amazing to see my favorite TV family together once again. If you also got emotional at the spin-off's preview, you're not alone. In an interview with People, John Stamos admitted he got teary too. The actor said,

This is so stupid, but it was when I saw the first promo for Fuller House. Even shooting it, I never got too emotional. When they released it, I woke up and watched it in my bed with my dog just bawling my head off.

No, not stupid at all! The fact that Stamos isn't afraid to admit how much the show means to him is awesome. Plus, it's all the more heartwarming that he watched with his dog, since it's just like Uncle Jesse hanging with his canine pal Comet. Just in case you haven't seen it yet, here's the trailer that turned the 52-year-old into a teddy bear.

Now that everybody's on the same page, here's a round-up of other times that Stamos showed his sentimental side. Because just like Uncle J, he may have a tough guy persona, but there are definitely more emotions beneath the surface.

1. Congratulating Mary-Kate On Her Wedding

When Mary-Kate Olsen tied the knot, her former TV uncle made sure to wish her all the best. Even though Stamos didn't attend the wedding, his Instagram message was super sweet.

Leading up to the Feb. 26 premiere of Fuller House, he's been sharing #StamosHomeMovies. Basically these nostalgic clips give fans a behind-the-scenes look at when they filmed the original show.

There's no denying that Becky Donaldson and Jesse Katsopolis are one of the greatest couples in '90s history. When he hit an Instagram milestone, Stamos gave the people what they wanted — this photo of him and his TV wife (Lori Loughlin) kissing. Have mercy!

4. Hanging With His Dog

Stamos made sure to celebrate #LoveYourPetDay. I'm guessing this is the aforementioned dog, who also was his Fuller House viewing buddy.

5. Gushing Over His Castmates

In a previous interview with People , Stamos said,

We never stopped loving each other. That magic you saw? It's still there because it never stopped from the day that we ended the show.

If that doesn't turn you into a big puddle of feelings, I'm not sure what to say. It's great to hear they're like a family in real life, not just on-screen.

Admittedly, I was surprised to see that Stamos is as obsessed with Frozen as the rest of the world. I sure hope he burst into a Jesse & The Rippers style remix of "Let It Go" when meeting Elsa and Anna.

Stamos' prom #tbt shows that he's just as nostalgic as everyone else who ever attended their high school prom. Also, this is definitive proof that his good hair days go way back.

8. Posing With His Grandfathered Co-Stars

The actor is constantly sharing backstage photos with his Grandfathered co-stars, including these adorable little twins, who just so happen to be wearing "Have Mercy!" t-shirts. Cutest. Thing. Ever.

In case you want to know how long I'll be a fan of Stamos and his sentimental side, this Uncle Jesse song sums up the answer perfectly. Forever.

For more ‘90s nostalgia, check out the video below.