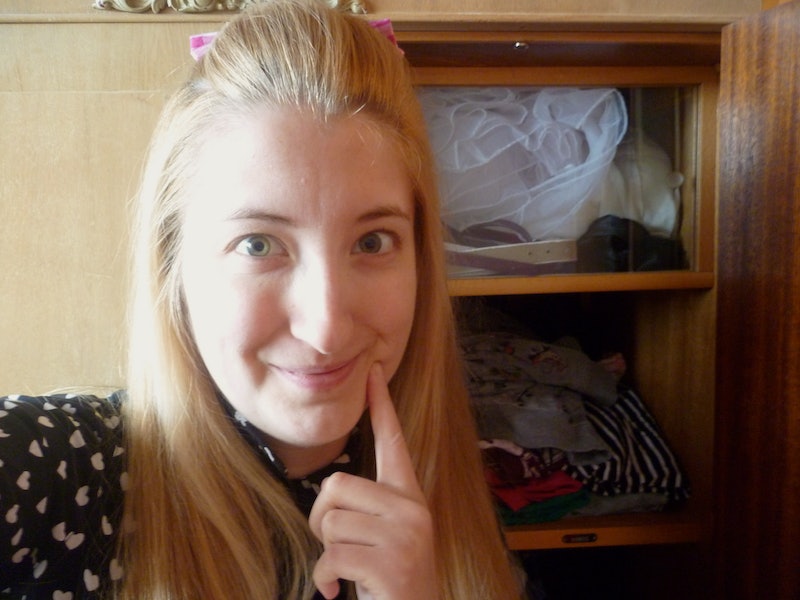 When sifting through the contents of your wardrobe, you are likely to find some items common in Millennial closets, such as a biker jacket, a skater skirt, or a pair of wet-look leggings. But if you delve deeper, you might discover middle school belongings in your closet as well. You'll probably find these gems way at the back, concealed in a shoe box, or shoved at the end of the hanger rail. The truth is that although these items may not serve any purpose in your life circa 2016, you probably can't bear to get rid of them because of all the nostalgic feels.

Perhaps you have a certain dress that no longer fits your adult body, but you've held onto it because it was what you wore when you had your first kiss. There could be a pair of sneakers hidden underneath some junk that epitomize your days as an emo kid. You might even have kept your old cheerleading uniform because it reminds you of a simpler time, when all you had to worry about was homework and who you were going to the school dance with.

Here are a selection of items you probably still have in your closet from middle school. I dove into my wardrobe so you don't have to.

I was pretty surprised to learn that I had kept these designer shopping bags in pristine condition, safely tucked away in the top compartment of my wardrobe. Suddenly it all came flooding back: I kept these for times when I was going somewhere "important" and wanted to make a clear statement about my love of fashion. I remember the Vivienne Westwood bag used to hold a birthday gift, and I don't even think the Chanel bag was originally mine. It's hilarious to look back and think of the lengths we would go to in order to look cool.

Blame the Plastics or Elle Woods of Legally Blonde , but there was probably a point in middle school when we all rocked a pair of animal ears to a Halloween or costume party. The classic choice for many Millennials was definitely bunny ears, though I'm sure cat ones came in very close second place.

3. A Pair Of Limited Edition Converse

During the heyday of Avril Lavigne, one of the coolest pieces of clothing you could own was a pair of limited edition Converse, especially if you were a skater kid. The normal styles were good enough, but if you got a pair that was a little unique, it added to the whole "alternative" vibe that skater kids craved — thus making you a super cool cat. Until someone else got a pair.

Personally, I always liked to push boundaries when it came to my style. There were periods of time during which I used to channel a sailor in everyday life and others that led me to sport a tutu over my skinny jeans. So when novelty tights were trendy, I pushed things one step further and found some zebra print ones. They were like my second skin.

Back in middle school, slippers were for nerds and grandparents. The most popular indoor footwear was the animal-themed, fluffy sock. They were equal parts cozy and comedic.

When the 2001 movie Moulin Rouge! was released, the world was introduced to Christina Aguilera, Mya, Pink, and Lil' Kim's rendition of "Lady Marmalade." My friends and I went lingerie mad. We loved the movie so much that we entered a talent competition and performed our own version of the song. Other teens wore corsets paired with their day-to-day attire, presumably in an effort to look "grown up" and "sexy."

7. A Vintage Item From A Female Relative

My mom gave me this retro Fred Perry skirt that she believed to be from the 1960s. I was absolutely besotted with it because it was vintage, it was by a known brand, and it was preppy. I still totally adore it, even if it's a little tight. I'm going to hang onto this one in case I can pass it on to my future daughter when she's in middle school.

During the skater period, it was also fashionable to wear surfer styles. I went through an androgynous era when I cut my hair short and wore chunky Vans sneakers, hoodies, and board shorts. I'm actually pretty pleased to have found these. Aren't they perfect for summer?

Although the studded choker is synonymous with the '90s, it came back during the emo and skater periods in the '00s. There was a fine line between all of the alternative groups back then. Even though my gang of friends was probably a mix of emo and skater kids, the popular teens couldn't differentiate between us. They just labeled us all "goths."

Affectionately nicknamed my "Beany Buddy" by my mom, this priceless item was one of the only things that helped get me through my periods. As a teen, my cramps were terrible. Either with the help of the contraceptive pill or aging, they have luckily improved in recent years. I'm definitely keeping this baby, though, just in case Aunt Flo decides to take a stab at me again.

I thought that wearing a sweater with a skeleton on it would aid me on my quest to looking outrageously alternative. In reality, I probably looked like someone who loved Halloween a little too much. Although I rarely wear this now, I have hung onto it just in case I ever need a last minute Halloween costume.

Looking back through middle school items in your closet is like a tactile walk down memory lane, so set some time aside to rummage through the treasures hiding in your wardrobe.

Want more nostalgia? Check out the video below, and be sure to subscribe to Bustle's YouTube page for more inspo!