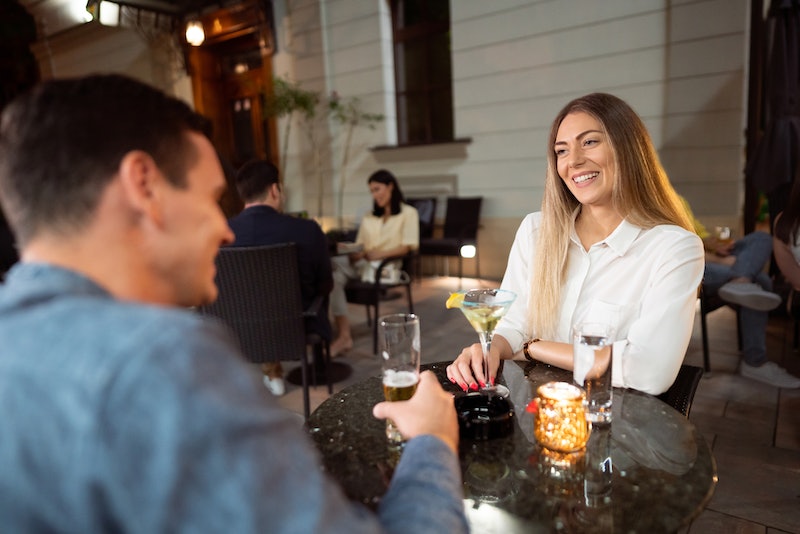 There are lots of ways that sexism sneaks into women's everyday lives. And while sexism tends to be more severe in non-Western nations, sexism can be found literally everywhere. Moreover, women around the world are so accustomed to dealing with sexist microaggressions on a daily basis, like mansplaining and tone policing, that sometimes we don't even notice when we're being subjected to sexism. That said, it can also be really easy to mistake scientifically and psychologically-based disparities among the genders for sexism. As it turns out, there are some things you might consider sexist that aren't really sexist at all.

Of course, it's true that scientific research on how gender affects everything from our brain function to our musculature can absolutely be reported in sexist ways and then used to further sexist agendas. On top of that, there's no denying that the results of even the most unbiased scientific studies on gender are probably influenced, at least in part, by societal pressures and societally-enforced gender roles. However, saying that men and women are biologically and genetically different in ways that affect everything from our dating choices to our memory capabilities isn't inherently sexist. It's science.

So take this with a grain of feminist salt, but here are five things you might think are sexist that really aren't.

1. The Argument That Men Are Naturally More Muscular Than Women

Obviously, saying that "women are the weaker sex" is both sexist and scientifically inaccurate. In fact, women are actually much stronger than men in many ways. Women produce more white blood cells than men do and we produce more antibodies at faster rates than men can. So when it comes to fighting off and recovering from infectious illnesses like the flu, we're absolutely winning. That said, when it comes to musculature, women are often at a biological disadvantage — so saying men are naturally more muscular than women isn't sexist; it's just true.

Of course, there are plenty of women out there who are stronger than most men simply because they work out hardcore. (I'm pretty sure Serena Williams and Rhonda Rousey could beat every man I know in an arm wrestling match.) However, as Psychology Today explains in their article on the topic, men in general are just naturally physically stronger than women:

Men are physically stronger than women, who have, on average, less total muscle mass, both in absolute terms and relative to total body mass. The greater muscle mass of men is the result of testosterone-induced muscular hypertrophy. Men also have denser, stronger bones, tendons, and ligaments.

Moreover, as Livestrong reported back in May of 2015, studies have shown that men have an average of 72.6 pounds of muscle in their bodies, whereas women only average about 46.2 pounds of muscle. It's easier for them to build it in the first place too, because life is really unfair.

2. Arguing That Male Brains Might Work Differently Than Female Brains

There are certainly ways that claiming women and men's brains work differently can be sexist. For example, arguing that having a female president would wreck the country because she'd make all of her decisions based on her emotions is super sexist and really stupid. Saying that men and women's brains don't work exactly the same in every single way, however, is just scientifically accurate.

There are, it appears, very slight differences in the way men and women's brains function. According to a new brain-scan-study — which included hundreds of subjects between the ages of nine and 22 and was published in the journal Cerebral Cortex — men and women's brains do show differences in mental ability, and they also show different patterns in brain connectivity. In the study, participants were tasked with completing tests of their mental abilities while having their brains scanned. The results were somewhat different based on gender, as New York Magazine's Christian Jarrett reported in his article on the topic. "The researchers did find sex differences in mental ability — male participants tended to perform better at spatial and motor tasks, whereas female participants were on average superior at nonverbal reasoning and recognizing emotions."

Admittedly, it's worth noting that societal pressures could possibly be skewing the results of experiments such as this one; a theory which Jarrett expounds on her article. "Neuroskeptics will likely find more appeal in psychological explanations for the sex-based performance differences. For example, stereotype threat — a term for when our knowledge of stereotypes causes us to perform according to those stereotypes — is bound to play a powerful role."

3. Men Offering To Pay For Women's Meals On Dates

If you go on dates with men, and those men offer to pay for your meal, that isn't necessarily a sexist move on their part. It definitely can be, if you're dating a misogynist who's likely only offering to buy your pasta so that you'll be in his debt, or because not paying for your meal would wound his fragile masculinity. However, if your date is offering to buy your meal for the right reasons, that can actually even be a feminist act on his part.

Before I moved to NYC, I rarely ever let my dates pay for my meals and/or drinks because I didn't like the feeling of "owing" someone I was sleeping with. I actually still prefer going dutch over letting someone pay for me, but in my limited experience, dudes in New York have always wanted to treat me. Even though it's kind of difficult for me to do, I've mostly been letting them, because NYC is expensive and the wage gap is a real thing.

When you consider the fact that women make an average of 79 percent of what men make, (and that statistic drops dramatically depending on your state of residency and your ethnicity), it makes sense that some feminist men would want to fight the patriarchy in this small way. So, when men offer to pay for your meals for socially conscious reasons, that's anything but automatically sexist.

Let me be clear: saying that women love it when men treat them like crap is sexist as hell. Saying women sometimes like bad boys, however, is science.

Women are sometimes attracted to bad boys for a variety of biological, psychological, and evolutionary reasons. Studies have shown that ovulation hormones lead women to think that "sexier" men will make more dependable mates and fathers than "dependable-looking" men will. On top of that, many bad boys are narcissists, and narcissists are naturally better at promoting themselves to prospective sexual partners.

Bad boys also appeal to women for flings because they generally don't stick around for very long. Unfortunately, some women go for bad boys because they feel more vulnerable to violent crime than they probably should. Plus, men are actually more prone to narcissism than women are, so it stands to reason that dating a narcissistic bad boy at some point is an experience that's challenging for some women to avoid.

5. Claiming That Men Don't Remember Things As Well As Women Do

Again, this claim can be sexist. I hate it when research that women have better memory skills than men is used in a way to excuse or accuse men for being thoughtless idiots. However, studies show that saying women are better at remembering things than men are is scientifically legit.

According to a 2015 Birmingham's Aston University study, women really are better at remembering to do certain things than men are. When they instructed 100 men and women between the ages of 15 and 40 to go through a series of memory tests, researchers discovered that the women were usually better than the men at remembering to perform tasks linked to specific events, rather than to a specific time. The women also excelled at remembering plans that involved doing, as opposed to saying, something.

It's possible that this difference in memory capabilities between genders is at least partially due to the long-standing societal construct of gender roles. As Dr. Palermo, one of the lead researchers of the study told the Quarterly Journal of Experimental Psychology, "an alternative hypothesis is that the sex differences we found could be due to the care-taking role often assumed by women and the fact that in addition to work responsibilities, women also have more responsibilities at home."

Basically, even though most women work outside of the home nowadays, women still do more housework and typically play a more active role in childcare than men do. So, it's quite possible that part of the reason women are better at remembering to get sh*t done is simply because we've always had to.

More like this
Here’s How To Deal With Sexual Frustration If You Don’t Want Casual Sex
By Annakeara Stinson and Mackenzie Sylvester
Here’s How To Reignite The Spark In A Sexless Relationship
By Vanessa Marin
Are Gemini & Gemini Compatible In A Relationship?
By Kristine Fellizar
The Case For A Hard Launch Summer
By Morgan Sullivan
Get Even More From Bustle — Sign Up For The Newsletter