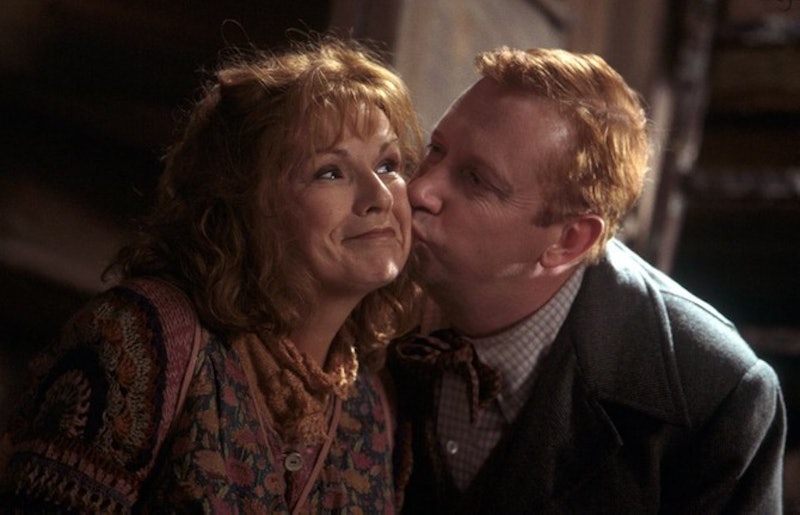 Family is one of the central themes of the Harry Potter series, and throughout, readers are introduced to numerous sets of parents, from the detestable Dursleys to the wonderful Weasleys. As a group, J.K. Rowling’s fictional moms and dads aren’t like real-life ones thanks to their magical abilities, but even so, Harry Potter parents offer important lessons. Good or bad, they can be counted on to provide practical insight into how to live, even for Muggles (or non-Majs, if you prefer) like us.

For Harry, these parents are especially important, given that he lost his own just months after his first birthday. The parental figures in his life aren’t always ideal (for shame, Dursleys!), but they give him the chance to learn about love, acceptance, kindness, and more. In a series overflowing with beautiful moments, they account for some of the most touching.

Below are 12 lessons we can all learn from the series’ most important parents. Be warned — if, by some miracle, you’ve managed to make it to this point in your life without having read Harry Potter — there are spoilers ahead. Honestly, though, if you haven’t read the series, please go do it immediately. It’s for your own good.

1. Be Welcoming To Others

Is there a better family than the Weasleys? Molly and Arthur Weasley set an amazing example for their kids by welcoming anyone in need in with open arms — and a sweater. For them, the more the merrier.

2. You Reap What You Sow

Lucius Malfoy, horrible man that he is, gets slapped by karma, courtesy of his former house-elf, Dobby. After treating the poor creature abysmally for years, he pays the price on multiple occasions, perhaps most memorably when the free elf turns his powerful magic on his former master to defend Harry. Clearly, actions have consequences.

3. Cherish Your Loved Ones

Sadly, Harry’s parents didn’t get to enjoy long lives, but from what I can tell, they were happy until the end. Lily and James Potter were in love, had a solid group of close friends (minus that backstabbing rat Peter Pettigrew), a beloved son, and were fighting for a cause they believed in. While we muggles don’t live under the threat of a dangerous dark wizard, our time is still limited, so we should make the most of it.

4. Be Careful Who You Trust

As smart as the Potters were, they put their faith in the wrong person and wound up as Voldemort’s victims when Pettigrew turned out to be as wormy as his nickname. Loyalty is admirable, but caution is important, too.

5. You Can’t Always Be Nice

Molly and Arthur always have their kids’ best interests at heart, but they aren’t afraid to call out their bad behavior, either. When Harry and Ron fly the family car into the Whomping Willow, for example, Ron gets an earful via Howler. Tough love can be the right call.

In spite of having been orphaned, Harry isn’t without parental figures; in fact, he develops quite a roster of them in his school years. Between Hagrid, the Weasley parents, Sirius, Dumbledore, and more, he is The Boy Who Was Loved as much as The Boy Who Lived. (It may be cheesy to say, but it’s true.) Families aren’t just people with the same DNA; they’re people who love and support each other.

7. A Well-Placed Curse Word Can Be Totally Appropriate

Throughout the books, Molly is never afraid to speak her mind, but she’s usually careful with her words. All bets are off when Bellatrix Lestrange goes after Ginny, though. As soon as that crazy witch threatens her daughter, it’s #NoFilter. Sometimes, you have to call it like you see it.

Sacrifice is part of love. While acts on the scale of Harry’s parents laying down their lives for him may not be the norm, we all have to place others’ needs ahead of our own from time to time.

9. Accept People For Who They Are

Living with the Dursleys is a nightmare for Harry because Uncle Vernon and Aunt Petunia are determined to squash the magic right out of him. Obviously, all they succeed in doing is making him miserable, but no less magical. There are some things that are just never going to change, so it’s better to let people be who they are.

It’s always strange for me me to think of Harry as a father, but he is — three times over — by the seventh book’s epilogue. While we don’t get to see much of him as a parent, he handles Albus’ worries about the Sorting Hat like a champ. Everyone needs someone to offer validation and compassion sometimes.

11. Nothing Is More Important Than Family

Hateful as they are, the Malfoy family actually has a lot of love for each other. Draco’s mom takes a major risk when she lies to Voldemort about Harry being dead in the Forbidden Forest. (Side note: You’d think Voldemort would be smart enough to do the job himself.) In turning her back on the Dark Lord’s cause, Narcissa’s deception could turn out horribly for her; nonetheless, her priority is her son’s safety.

It is heartbreaking to watch Harry lose so many parental figures, from his parents as a baby to Professor Dumbledore to Sirius to Lupin in his teen years. These losses, however, prove that love doesn’t end with a life. Harry is still guided by what he learns from each of them, and he has their protection, in different forms, even after they’re gone.