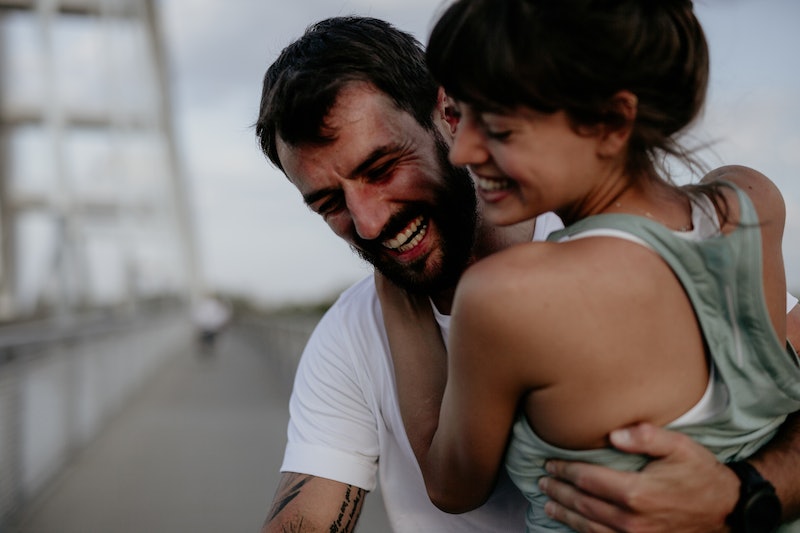 If you've been single long enough, you've likely come across some form of misogyny while dating. Between the prevalence of sexism in every corner of our society and the tendency for dating to bring out gender roles, it's hard not to come by any stereotypes, disrespect, or patronizing treatment. Some misogynists you end up on dates with will say overtly sexist things, and they're the easy ones to spot. But most are more subtle, hiding their sexism behind intellectual or spiritual beliefs, scientific justifications, or even praise for women.

Here are a few types of people worth looking out for if sexism is a relationship deal-breaker for you.

This kind of misogynist finds it really fascinating to talk about oppression in, you know, a hypothetical sense. He enjoys pondering such profound questions as "What would society be like if we weren't taught rape was wrong?" and "What if growing up poor actually *is* a privilege —what doesn't kill you makes you stronger, amirite?"

The problem with these discussions is that for many people, these questions are not, in fact, hypothetical, and their oppression is not fodder for a fun thought experiment. The philosophical misogynist may or may not unjokingly identify as an objectivist. He also may or may not casually ask, "What if you were just a projection of my unconscious?"

This person is unwilling to entertain your criticisms of the gender binary, because science! He believes that it is biologically engrained in him to prefer women who act submissive, shave their legs, and have a Barbie doll's body, and if you don't perform this role, he believes you are going against the very order of nature. He may or may not mansplain your lived experiences of sexism by informing you that you have been sexually harassed, taken less seriously at work, or shamed for your sexuality because of evolution. He also probably considers himself smarter than others for taking these highly "objective" views.

Similar to the spiritual misogynist, the benevolent sexist endorses gender stereotypes on the grounds that they are flattering to women. He has the utmost respect for the female gender... as long as the ones he dates are beautiful, nurturing, emotionally intelligent, and all the other "feminine" qualities he considers innate. His support for women's rights hinges on the premise that women are more compassionate, less impulsive, less sexually driven, or something else besides just being human. Being seen as an individual by a benevolent sexist is an uphill battle.

This guy may have watched a few too many sitcoms, because he's cast himself in the role of the dogged nice guy, who is so very nice that he is actually friends with a real-life woman! And he doesn't sexually assault her! And then, once she recognizes how so very noble and generous he is, he will ride off with her on his horse into the sunset, and they will live happily ever after. Except... that's not how real life works. Because, in reality, being friends with a woman isn't a courtesy, and not sexually assaulting her isn't a valiant feat. If someone ever complains to you that women "just don't give him a chance" or gets offended if you don't respond to an OkCupid message or tries to guilt you into a second date, that could mean he's suffering from Nice Guy Syndrome(TM) and, in fact, is not nice at all.

Some misogynists you date might actually identify themselves with feminism or other social causes. But when it comes down to it, they're more interested in advancing themselves than lifting up women. They may use feminism to win women over, or they may be focused on economic, racial, or environmental injustice without acknowledging how these issues affect women disproportionately. Identifying as a feminist or a progressive is never a bad thing, but if someone has these labels on his dating profile but doesn't back them up with his actions, that could be a sign he's just looking for a gold star.

This guy isn't usually even trying to put women below him — he's just being what he's been taught women want: a "masculine" man who "takes the reigns" with "assertive" behaviors ranging from planning dates singlehandedly to making the first move physically in a way that borders on coercion.

Unfortunately, these behaviors hinge on two faulty assumptions: that women in general like to be dominated, and that the right way to treat someone who enjoy being dominated is to behave dominantly without their input. In the process of trying to enact every woman's supposed fantasy of being swept off her feet and spontaneously thrown against a wall, the man who takes the reigns can actually end up making his dates very uncomfortable.

If your date pulls out phrases like "just trying to explain the other side" and "just playing the devil's advocate" after saying offensive things they probably don't even believe, they're likely not taking oppression seriously. Like the philosophical misogynist, the devil's advocate views sexism as an interesting conversation topic, not a daily reality. Your date should understand that discussing misogyny isn't necessarily fun for everyone, and wanting such topics treated sensitively doesn't make you the "PC police" — an accusation devil's advocates are inclined to use. Whether they relate to it or not, the oppression you've experienced is real and should be acknowledged.