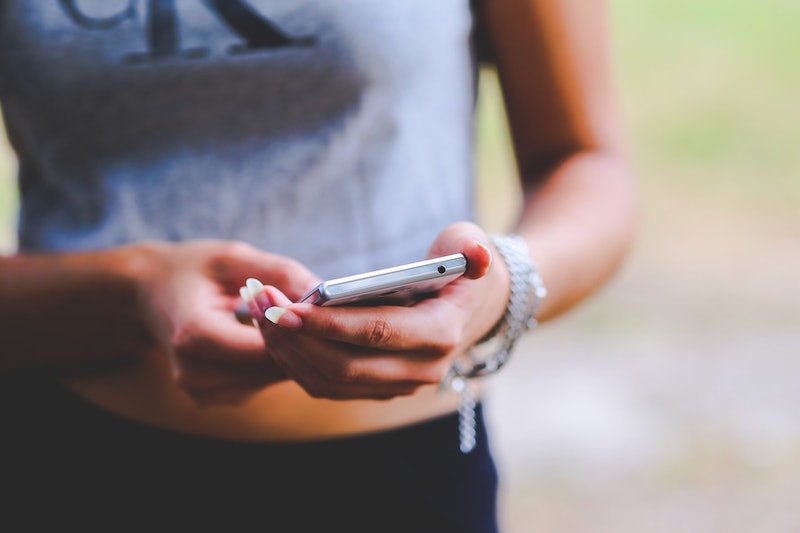 While a physical affair is pretty easy to define, it's often a whole different story when it comes to emotionally cheating on your partner. Late night texting, over-sharing, private convos — it can be tough to figure out what's innocent friendship, and what crosses into the realm of an affair. That's why a good barometer to keep in mind are your feelings, the feelings of your SO, and the feelings and expectations of any third party involved.

And that makes sense, doesn't it? After all, this is an emotional affair we are talking about. So maybe your partner hasn't booked a hotel room, exchanged a kiss, or snuggled up with anyone. But things can get out of hand in others ways, usually in the form of broken trust, unmet expectations, and hurt feelings.

In fact, emotional cheating is often considered far more painful than physical cheating, says psychologist Nicole Martinez, Psy.D., LCPC, in an email to Bustle. "When you are emotionally cheating, it is all about the emotional connection ... It is about crossing lines and sharing things that would make your partner uncomfortable (including talking about them in a negative way)."

To make matters worse, emotional cheating can easily lead to physical cheating. But either way, it often spells the end of a relationship. "When someone is clearly crossing lines with someone who is new to their lives, was significant in a romantic way, or is simply engaging in activities that make you uncomfortable, and they know it, but will not stop... this can be a definite deal breaker," Martinez says.

Since relationships should be based on trust, it's really no surprise emotional affairs create such problems. If you suspect something is up with your SO, then here are some signs of emotional cheating to watch out for.

Check Out: The Emotional Affair: How to Recognize Emotional Infidelity and What to Do About It, $10, Amazon

If your partner is suddenly texting all the time, or being secretive with their phone, it could be a sign that something is going on behind your back, Martinez says. This is especially the case if your SO becomes defensive or angry when you ask what's up, or when you come too close to their phone. Keep in mind, however, that everyone is entitled to privacy. But excessive shadiness is definitely worth noting.

2. A Sudden Love For Social Media

A flirty phone call is pretty obvious. What's not so obvious? Private messages on Facebook, and other social media platforms. If your partner is suddenly all about social media — especially if they've never previously shown an interest — it could be they've found a way to chat without being too obvious. That's because these digital platforms make the relationship easier to hide, noted relationship expert Natasha Burton on Livestrong.com. Sneaky sneaky indeed.

3. They Won't Shut Up About Their New Friend

There is absolutely nothing wrong with having friends of the opposite sex, or otherwise. But while friendship is one thing, bubbly adoration is something completely different. As Burton said, when someone gets emotionally involved with another person, those feelings tend to spill into other realms of their life. When that's the case, they may seem way too thrilled with this other person, and that's not OK.

4. They Accuse You Of Cheating

If your SO showers you with cheating accusations, especially if it's coming out of left field, if may be they are projecting guilt onto you. According to Martinez, "There is something in them that feels it could justify and assuage their guilt if the other person is doing the same thing." Definitely not cool.

5. They Know Way Too Much Info

Part of an emotional affair is talking about everything to the point of over-sharing. You know, the way couples do. So it could be a bad sign if your partner is suddenly extremely aware of more personal details about another person, especially if it's to an unreasonable level, Burton said. If their closeness makes you uncomfortable, voice your concerns. A good partner should respect your feelings, and back off.

6. They Are Super Defensive About Their Plans

It's one thing to want privacy, but it's another thing to viciously demand it. So if you casually ask your partner where they are going on night, and they snap or become defensive, it may be a sign something is up. They may even angrily question why you'd want to know, Martinez says, which is another sign of defensiveness.

7. Sex Has Gotten All Kinds Of Weird

When your partner is feeling close to another person, they might check out emotionally during sex. You may pick up on subtle signs that [they're] not fully present, such as a lack of eye contact, feeling rushed to get it over with, and no intimacy afterward, noted Hannah Hicock in an interview with Diane Gehart, professor of marriage and family therapy, on RedbookMag.com. It's not a nice feeling at all.

8. They Don't Turn To You First

If your partner is suddenly mum about their day, it could be that they're turning to someone else to fill their convo quotient. As Hicock said, "When your [partner] stops chatting you up about the stuff you normally can't shut [them] up about ... that's something to pay attention to. It likely means [they are] still talking about all that, but to someone else."

Sure, sometimes people work late, or get called into the office on Saturday. It isn't usually a big deal. Other times, however, a change in work schedule can signal a problem, according to Martinez. Before you assume the worst, simply ask your partner to be open and honest, and hopefully their answer will settle your suspicions.

10. Your Partner Is Blowing You Off

Everyone should have a life outside of their relationship. But at the end of the day, a good partnership means you both want to spend a lot of time together. So it can become incredibly hurtful when your partner has their priorities all wrong. According to Jenny Erikson on HuffingtonPost.com, if your partner is blowing you or their friends off in favor of one person, it could be a sign they are too close. And that's not good.

Pretty much everything above can be laughed off as a misunderstanding. What can't be ignored, however, is the unshakable feeling that something is wrong. As Hicock said, "It's been said before, and we'll say it again: Your gut doesn't lie ... When a supposedly innocent, platonic friendship has your red flags flapping, then something isn't kosher." So pay attention to these feels, and make them known. Hopefully you and your partner can work things out.

And remember — don't jump to conclusions just because your partner hides their phone, or talks about their friend. It can all be perfectly normal. But if your SO's outside relationships make you uncomfortable, or you suspect something is up, it's definitely OK to express your concerns. It's always better to be open and honest now, rather than hurt later on.