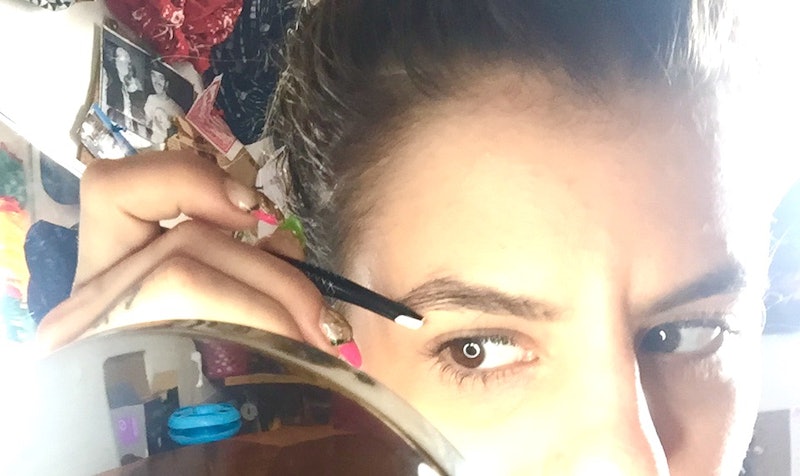 I’ve never been formally diagnosed with dermatillomania, but I assure you the writing's on the wall, where the mirror I use to tweeze and pick my brows hangs. I at least know what triggers it (stress) and how to avoid picking my brows completely off (pursuit of vanity). It’s been a long journey since my spermy brow bygone days, but even as I have gone thicker, I still tend to obsessively pluck at any strays as soon as they show themselves.

Being a relatively stylish gal and a bit of an obsessive groomer, I would agree that my brows were on fleek before I was challenged by my editor to a tweezing fast. This was in large part why I agreed to see what it would be like to go a whole month without any hair removal. There are some things I’m pretty sure I’ll never quit, like coffee, cheese, and weed — and tweezing was always on that list. But journalistic integrity was my driving force to not touch my expressors with anything of the depilatory nature for as long as was required.

Going four full weeks without removing stray hairs was going to take some serious willpower, and a few important tools to keep all that extra hair in check. My Artis Brow Brush is absolutely crucial! It allows me to draw in a more subtle line that eyeliner-type brushes, and it’s easier to blend with the stray hairs. It’s also great for applying a balm or salve to mix with brow products for a softer effect.

For reference, here are my brows before I went a month without grooming them.

So, brow brush in hand, I went ahead and ditched my tweezers for a full month. Here's what happened to my brows.

My hairs started to poke through in the brow bone area, like they always do. I was bummed that they crowned so soon considering I had hoped they would give me some more time. Now I have to watch them grow in for the entire experiment! It didn’t completely ruin my look, but I noticed right away that changes would have to be made.

First, I stopped applying any of my usual growth boosting serums to the brow area, because I really didn’t want to encourage the inevitable. Second I had to ditch my beloved brow babe: Make Up For Ever Aqua Brow. Usually my ride or die, it just was drawing too much attention to the hairs growing in, and I wanted a slightly more natural look. I love you Aqua Brow! Don’t you forget about me!

Week two actually provided a bit of a relief, even as my brows grew back with a vengeance. I took a business trip to Milan during this week, so not packing the tweezers was the easiest way to resist giving in to the urge to pluck — especially since I didn't know the word for tweezer in Italian. Frankly it ruled that I had one less thing to worry about while trying to look New-York-Hot-Professional in a foreign land with half of the time to get ready, and a fraction of the support products and wardrobe.

While I was there, I noticed that everyone in Italy was on one side of two brow extremes: over-tweezing or not tweezing at all. In other hair related areas, my blow dryer refused to work overseas, so I fit right into the local style of being a bit more natural. Cuts were more textured and expected to live with the weather and the wearer, not be beaten into submission by a round brush. In general, the makeup and style in Milano was miles chiller than I had expected. Being surrounded by beautiful women who were living their life brow-naturel by choice definitely helped me feel better about my own un-groomed pair.

Being wiped and jet lagged generally sucked, but it did prevent me from having any desire to spend hours in front of my magnifying mirror doing my worst. Though stress and exhaustion typically trigger my tweezing episodes, I was literally too tired, so that was oddly fabulous. By this time my eyebrows had connected like the Aleutian Islands. Russia and Alaska were finally touching again, it took all I had to not tweeze it. I was tempted to just go to town on the uni, but I knew once I started I wouldn't be able to stop.

One con: I started picking my face instead of tweezing and definitely started a dirty shame and acne spiral. Between the acne and overgrown brows, I started to feel less put together than I'm used to. To compensate, I started piling on more makeup than I ever would usually... but then I feel bad about that too.

By the end of week three, I was pretty sick of all this guilt tripping I was putting myself on. So I gleefully applied my favorite foundation, and found that pink-toned brightening pens like my Dior Skinflash Radiance Booster Pen, which I normally paint under brows to wake them up, actually do a delightful job of muting those hairs. This time, I put on the makeup because I enjoy it and it looks damned good. And I continue to not tweeze.

At this point, I’m dreading looking in the mirror. It just irks me to see those hairs in between my eyes. Call me vain (hell, I do) but the strays have been on stage too long and it’s time to cue the music and cut their acceptance speech short. I think a combination of working in beauty and today’s constant barrage of social media exposure makes me feel like I should practice a standard of beauty that makes me feel good. I don’t tweeze my eyebrows for other people, and was actually delighted when no one commented on them negatively all month. Still, I like them to be sisters, not conjoined twins.

I was ready to tweeze, but there was a super great catch: I landed a brow consultation with Senna Cosmetic’s OG Brow Expert and Founder, Eugenia Weston, when the fast was over. Not a bad way to get advice on where to go from such chaos. Honestly as fuzzy as they got, having a clean canvas to curate the perfect brows to start fresh with was a fabulous reward. The stray hairs at this point hit the entire brow bone, and started to connect on the sides with my vellus temple hair. The land bridge would be complete if this went on any longer!

I did my makeup like I normally do and gave my brows their full-on application before meeting Weston for some rosé and to take in the skyline. Weston’s business, Senna, has been up and running independently through trend rise and trend fall, so we had a lot to discuss in regards to the ideal brow! We spoke about all of the big eyebrow cults over the years, and since Eugenia has been working as a professional makeup artist for over 40 years, she’s seen the best and worst out there. By leaving brows fuller than most of her peers throughout some of the formative thin years like the ‘90s, Weston set herself apart by being an advocate for the natural brow, lightly enhanced.

Weston inspected my continental crossing and declared them nearly perfect as is. As a dark brow queen and tweeze addict, I was took this hard. I struggled to believe it since they felt so bushy to me, and led me to over-pencil too. I was prescribed a much lighter hand — as Weston noted, my love of dark brow products was bringing light into the wrong places.

The biggest problem with the bold brow look, according to Weston, is that people don’t consider the definition of the hairs. This is what makes the look really sing, not just shading in a perfect angle. For me, there’s no lack of hair that’s an issue, so dropping down to a lighter brow product and using a gold-toned gel would give me the clean arches I’m seeking without requiring a perfect paint job, probably just as labor intensive and bold as a cat eye at times.

So after a month of not tweezing at all, it wasn't as hard as it might have usually been to follow Weston's recommendations to not over tweeze, and only remove the truly out of control parts. By starting with a clean shape done by a pro, I feel like I can be much more lax about day-to-day grooming now that I know that it takes almost a full moon cycle to really get the garden really growing.

Then I used Senna’s Sketch-A-Brow to only add tiny hair strokes where needed, as per Eugenia’s advice. It had never before occurred to me to only put it where needed, so great was my desire to make them absolute works of perfection. Following up with Brow Fix x Setting Gel in Gold actually softens my super dark hairs to match my lighter Spring dye job.

Overall, I’m pretty into it! This doesn’t feel like those Instagram brows everyone is always making fun of, it feels a bit more timeless and looks more natural, but still looks great even when I’m wearing a full face of makeup. So while I wouldn't necessarily skip out on another month of no tweezing, I'm happy it gave me the opportunity to start fresh with (basically) a new set of brows. If you haven't been feeling your arches as of late, I suggest you put down the tweezers and let 'em grow for a bit too.