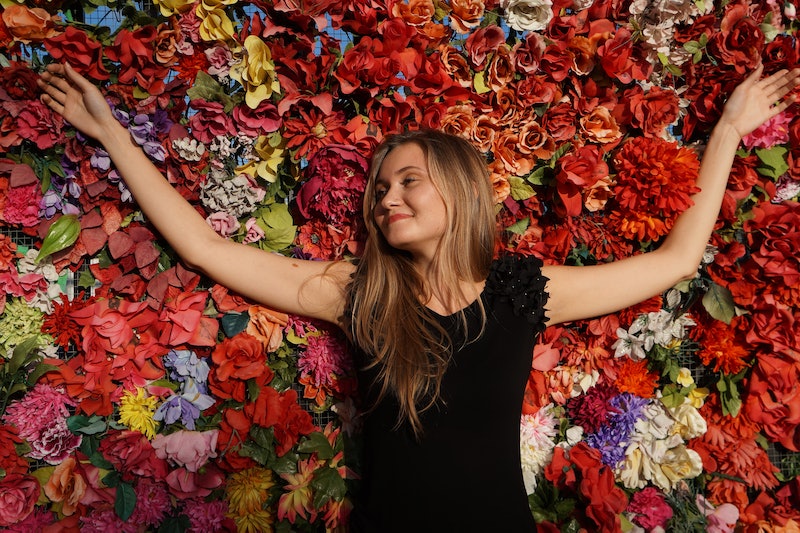 Personally, I love both giving and receiving oral sex, but I can tell you from experience that the things women think when they climax from oral sex aren't always sexy. In fact, they're mostly hilarious. Personally, when I'm climaxing from oral, my thought process goes something like this: Concentrate or you'll lose it! Dang, I hope his jaw isn't too sore after this. Point your toes! But not too hard or your foot's going to cramp up again. Is it happening? OMG IT'S REALLY HAPPENING. So, yeah, mine is not the sexiest of internal monologues.

Of course, everyone's different. I can't possibly know all the different things women think when they climax from oral. Plus, oral sex isn't everyone's favorite way to get down in the first place. I've met some women who don't like receiving oral sex because it doesn't do much for them, and I've talked to other women who are so sensitive down there that oral actually hurts them. Whatever your reason might be, though, it's totally OK if you don't like receiving oral sex. Even women who love it when their partners go down on them can't always orgasm from oral, and that's also more than OK.

Personally, though, almost all of the orgasms I've had during partnered sex happened while I was receiving oral, so I'm definitely a fan of the act. If you are, too, then you're probably familiar with some of these thoughts women have when they climax from oral.

I can't tell you how many times I've gotten super close to climaxing from oral, lost my focus, and then had to start all over again. It's frustrating as hell for everyone involved, but if your partner is patient, you can always start over.

What's even more aggravating than having to start over, though, is the fact that half orgasms and disappearing orgasms are a real thing. It's such a let-down when you're right on the edge of what feels like a super powerful orgasm in the making, then you lose your focus for a split second and your impending orgasm turns out to be super underwhelming — or nonexistent — as a result.

If you've never had a foot cramp happen during sex, consider yourself lucky. Personally, most of my sex-induced foot cramps happen while I'm receiving oral, because getting head makes me point my toes like crazy. Unfortunately, this has caused so many miserably painful, unsexy foot cramps for me (sometimes as I'm climaxing) that I can't not think about the possibility of having my orgasm eclipsed by a Charley horse. For your sake, I hope you can't relate.

Anyone who has given oral sex knows that it's hard work, and women don't forget about this when we're on the receiving end of it. In fact, I think most of us start thinking about how we can return the favor before we've even finished, because we know from experience that making someone come from oral takes dedication, multi-tasking, and a willingness to power through some serious jaw pain.

Climaxing from oral is almost as much work for the person receiving as it is for the person performing. So as appreciative as ladies are to their partners for going down long enough to get them off, orgasming from oral sex can be so mentally challenging that I don't think it's possible to get there without feeling like a damn victor afterwards.

7. "I Hope They Don't Expect Me To Come Every Time They Go Down On Me Now"

This may not be an issue for women in long-term relationships, because if you've been with your partner for very long at all, then you've both likely learned by now that sometimes oral just doesn't cut it. If you're in a new relationship, though, I feel like this is a pretty common thought to have the first time your partner makes you come from oral. At least, it is for me. Don't put too much pressure on yourself, though, because the whole point of sex is to have fun, and there's nothing fun about overthinking your orgasms.

8. "What If They Can't Climax When I Return The Favor?"

There are very few grown-ass women who don't know what it's like to sleep with a selfish partner. Personally, I had years of mostly-bad sex with a partner who hated giving oral. So when I actually find someone who's generous enough to camp out between my legs until I come, I feel a ton of pressure to return the favor just as soon as I can move again.

Obviously, wanting to give your partner the pleasure they gave you isn't a bad thing — it's really sweet. It sucks that this is one of the first thoughts most women have after they've climaxed from oral, though, because women know better than anyone that putting too much pressure on your partner to orgasm during any kind of sex just isn't cool.

Perhaps this isn't the case for all women, but I've never been able to orgasm from oral with one-night stands or casual flings. The only people who have ever been able to get me off with cunninlingus were people I felt super comfortable with — and even they weren't able to bring me to orgasm until we'd developed some pretty strong feelings for each other. So, yes, when a person actually manages to make me climax from oral, I can't help but wonder if I'm falling in love with them. I don't think I'm the only woman who's experienced this, either.