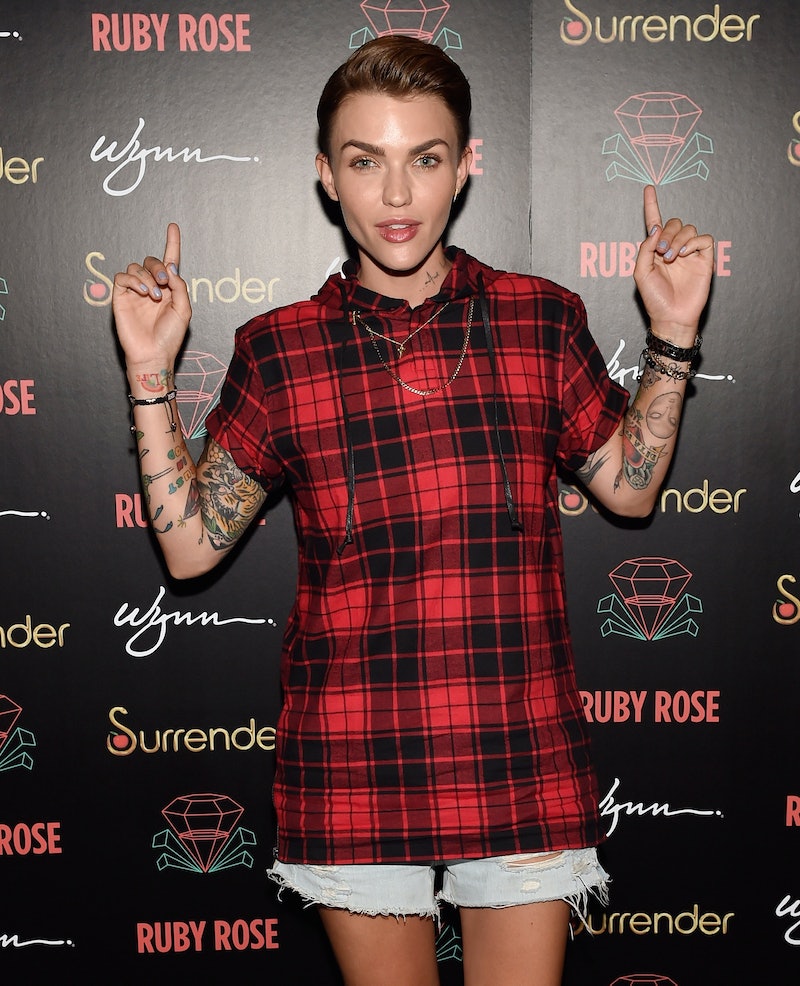 Representation makes a world of difference when it comes to acceptance and expressing yourself in a way that might go against society's standards. That's why it's exciting when fashion icons challenge gender norms, because those watching at home see that they're not alone. And the more times the public is exposed to a seemingly "radical" idea, the more comfortable it gets with the notion. From older celebrities rocking minis and cleavage, traditionally feminine stars pushing back against antiquated gender norms, gender fluid actors catching the public's attention, and men dabbling in a fair amount of gender fluid fashion, these once scandalous-seeming looks are slowly becoming the norm.

These trend setters are creating a new normal with their representation and making space for those that don't feel comfortable or don't identify with traditional gender ways of portrayal. Whether you identify as masculine and like to have long hair or wear pussybows, or are a feminine person that can't stand heels or dresses, you feel less of an outcast when you see those in the public eye pushing the envelope the same way you are. So in an effort to celebrate these boundary pushers and hope for more to join their ranks, here are 11 fashion icons that challenge gender norms.

When Julia Roberts got wind that the world was still stuck in a June Cleaver mentality when it came to the presentation of women, she decided to take a stand against it. According to Huffington Post, Cannes officials stated that it was mandatory for women to wear heels at premiers, and began turning away those that showed up in flats. Which made us collectively take a glimpse at the calendar to double check it was still 2016.

So what did Roberts do? She didn't break the flats rule — no, instead she walked the red carpet barefoot, making a point that just because you're a woman doesn't mean you're required to wear heels.

Ellen Page came out as gay in 2014, and ever since she's been playing with her style, trying to find a look that was most "her." And it seems she has found a penchant for immaculately cut suits and leather booties, as a quick peek at her red carpet looks goes to show. Here she is at the 2016 Vanity Fair Oscar Party, looking just as female in a skinny tie as she would in an Oscar de la Renta dress, and every bit as on point.

Here is Susan Sandon at Cannes, breaking every so-called rule of femininity. Strutting down in shades and a tux-inspired dress, she gave a cheeky nod towards masculinity at a festival that has strict ideas as to how a proper woman should look on a red carpet (just refer back to the Julia Roberts barefoot protest.) But what's even better yet is that the tuxedo dress helped her smash stereotypes on what a woman of a certain age should dress like. Rather than "dressing her age" with a modest frock that would let her blend into the background, the 69 year old actress strolled up flashing thigh and an enviable amount of cleavage, challenging the expectations put on women after a certain birthday.

From staring in the Louis Vuitton's SS16 womenswear campaign to wearing a dress to Coachella, Jaden Smith is an advocate of gender-bending, androgynous dressing. As Smith himself explained on Instagram, there's no difference between female and male clothing. In a caption he smartly wrote, "Went to Topshop to buy some girl clothes, I mean 'clothes.'"

Ruby Rose explained in an interview with ELLE, "For the most part, I definitely don't identify as any gender. I'm not a guy; I don't really feel like a woman, but obviously I was born one. So, I'm somewhere in the middle, which – in my perfect imagination – is like having the best of both sexes." Because of that, Rose has a chameleon-like style, not clearly subscribing to the gender binary and showing the public how unnecessary it is. If you feel like putting on a dress one day, put on a dress. If you want to wear baggy plaids and engineer boots the next, go for that as well.

Jared Leto has the type of hair that some women dream of: Long, shiny, and with just a beachy hint of curl. Sigh. And by rocking those hair-commercial-locks, he's helping to derail male gender norms. Masculinity is often times linked with short, crew cut hair, but when Leto rocked a man braid at the 2015 Golden Globes or went platinum blonde, he showed masculinity wasn't tied to one's hair. So go wild.

7. Julia Roberts Wearing A Suit To Her First Golden Globes

Rather than accepting her first Golden Globe in 1990 wearing an evening gown like the rest of the female attendees, Roberts walked up on stage in an over-sized men's suit. And showed that you could look just as fabulous in a three piece as you could in a slinky gown.

Conchita Wurst is an Austrian pop star turned model that made her debut as part of Jean Paul Gaultier’s couture show in Paris, walking, according to ET, "in the coveted final spot that is usually reserved for the designer’s favorite model." Wurst is a drag queen that doesn't identify as trans-gender, but, as reported by ET, "they choose to use masculine pronouns when referring to their off-stage identity (Thomas 'Tom' Neuwirth) and feminine pronouns for their Conchita Wurst persona." With this duality, they show that you could effortlessly mix both genders, taking what you need from each to best represent yourself.

Harnaam Kaur is beautiful, feminine, womanly, and also happens to rock a stellar beard. Kaur is a model and body image activist who has Polycystic Ovarian Syndrome, a hormonal condition that can cause excess hair growth. Rather than succumbing to female beauty standards and spending time and money removing her facial hair, she decided to instead embrace it. She told the Daily Mail, "It makes me feel like a brave, confident woman who isn't afraid to break society's norms.' And more importantly, she's showing other women it's possible to embrace qualities that might fall outside of society's gender norms.

When Jaden Smith went to prom he could have easily put on a traditional tux, but instead he picked up date Amandla Stenberg wearing a shift. Donning a minimalist dress and an over-sized blazer, Smith once again proved that you could be as fluid as you want when it comes to fashion. All it takes is a little bit of confidence and determination to follow your gut.

When model Ruth Bell had long, waist length hair, she didn't get much attention in the fashion world. But when she buzzed off her locks for an Alexander McQueen campaign, she became one of the most in-demand models of the season. When asked if she would grow out her hair again, she told Elle, "Hell no. I don't miss the hair. I don't want it ever again. This is so much better." While some might think it "brave," Bell shows there's no one way to look like a woman. Long or short hair, it's all correct.

With more and more figures in the public eyes challenging gender norms, it's becoming easier to see duality as old fashioned. And because of that, more people feel more comfortable to express themselves the way they need to. Here's to it only continuing!