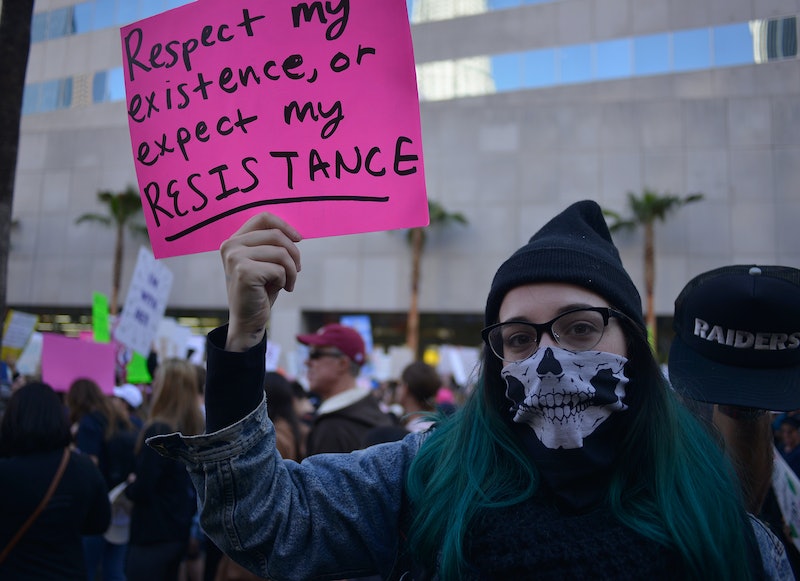 Even though the basic definition of feminism is equality for all, there still persists a belief that the movement is a negative thing. This belief, however, is frequently based on misconceptions about feminism — so, I hereby present to you seven tweets every anti-feminist should read. They'll help clear up what feminism actually is and what it isn't, and hopefully underline why we still need feminism — because contrary to popular belief, sexism isn't over. In fact, inequality of all sorts are still rife in our culture, and in our world.

Although there might be any number of reasons someone might identify as anti-feminist, the simple truth is that anyone can be a feminist. Feminism is about equality; it doesn't have to confine your decisions; and it is necessary because women, gender minorities, racial and ethnic minorities, and numerous other groups of people are disadvantaged in countless ways. While it would be nice to live in a post-feminist world, we're not there yet — and in order to get it, we need to first acknowledge that we have a lot of work left to do.

Here are several things anti-feminists should know and a few tweets that drive these points home.

As this tweet points out, feminism is still necessary because the issues it started off to fight still exist. Women in the United States make 79 percent of what men earn, 39,000 child brides are married every day, and one fifth of girls worldwide don't go to secondary school. Gender inequality is rampant all over the world, and it isn't going away any time soon unless we do something about it. That's where feminism comes in.

2. Many Women And Gender Non-Conforming People Live In Fear

It's hard for some men to understand that members of marginalized groups constantly have their guard up. 97 percent of respondents to one survey by Hollaback! said they'd experienced street harassment, and 38 percent said it made them feel unsafe to go out. When we're walking home alone at night, we're looking over our shoulders periodically and taking out our keys in case someone tries to attack us. When we meet a guy at a party, we're careful not to be too friendly so that we don't "lead him on." We can't go about our lives with the freedom and carefreeness that many men do, and that's a major inequality because it drains our energy.

3. Sexual Assault Is An Epidemic

Sexual assault is shockingly common for people of all genders, but women and gender minorities experience the worst of it. According to the Association of American Universities' Campus Climate Survey, 33.1 percent of women and 39.1 percent of TGQN (transgender, genderqueer, questioning, or non-conforming) people experience sexual assault in college. This problem is simply too big to ignore. And, as this tweet points out, it reflects an even larger problem: the view of women as objects.

On top of experiencing sexual assault and harassment, gender discrimination, and other effects of sexism, women are shamed for speaking out about these things. When sexual assault victims come forward, for example, the rapist's word is frequently taken over theirs. People distrust women not only to speak about their own experiences but also to make their own decisions, which is behind governments' frequent efforts to limit abortion rights. We still live in a society where women are not trusted to make choices about their own bodies.

In response to people who say that certain feminist movements, like "free the nipple," are just in response to first-world problems, this tweet distinguishes between "privileged" and "vital" feminism. There are some problems that literally put people's lives at stake and others that put our autonomy and mental health at stake. Feminists can simultaneously be concerned about both.

6. Gender Inequality Is A Problem Here

Some people argue that feminism may still be necessary in the developing world, but in, say, the United States, things are already equal. As this tweet points out, violence against women is extremely common in the United States. The tweeter uses Cara Russell, who was allegedly shot by her husband, as an example. (Cara Russell died from gunshot wounds in June of 2016; Mickey Russell died on the scene of a self-inflicted gunshot wound, according to the Denver Post.) According to the National Coalition Against Domestic Violence, one in three women in the United States has been the victim of physical violence at the hands of an intimate partner.

7. People Still Think Of Gender Equality As A Negative Thing

One piece of evidence that feminism is still necessary is all the backlash it faces. If gender inequality were a thing of the past, people wouldn't blink an eye at the mention of equality. Yet as it stands, feminism often triggers defensiveness, anger, and even hatred, and that's a sign that it's all the more necessary.

Images: all tweets used with permission from their users.