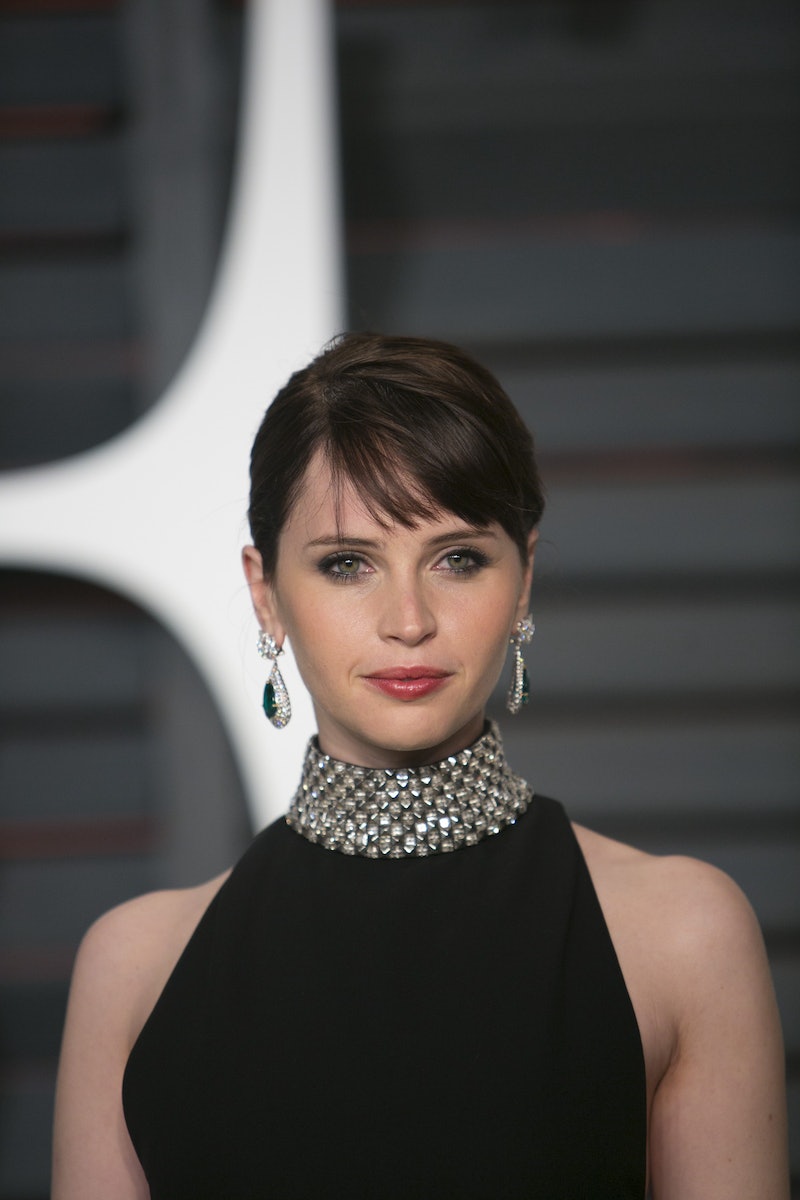 The year is almost over, but there are still a lot of movies yet to be released in 2016. Peruse that list of this year's upcoming movies, and you may notice they have a few things in common besides just being possible 2017 Oscar nominees; there is definitely a lot of crossover on who appears in them. Between now and the end of the year, there are a whole lot of actors and actresses who will be popping up in multiples films. I'm talking two, three, even four movies in the next three months, which adds up to a whole lot of screen time.

Some are just taking on small roles in multiple films, while others will be hogging the screen in some huge blockbusters or early Oscar contenders. (Yep, looking at you Amy Adams.) There are also a few newcomers who will be hard to ignore after this year is through. On top of all that, there are some Hollywood mainstays that are really showing their range with their multitude of films. And, if you're in The Magnificent Seven, you're having an even more magnificent year.

This is all to say that these 16 performers are going to be very hard to get away from from this upcoming movie season.

The MVP of this end of year movie season is appearing a whopping four films — one of which, is a little film called, Rogue One: A Star Wars Story. Perhaps you've heard of it? Jones is playing the film's latest heroine, Jyn Erso, who is still a bit of a mystery. When she isn't fighting off the Empire, she'll also fighting off global terrorism alongside Tom Hanks in the latest Da Vinci Code thriller, Inferno, out October 28. That same weekend, she'll be competing against herself with the movie Collide, out October 30, which has her taking to the streets of Germany in a drug-fueled chase. For a change of pace, she'll then play a mom, who is diagnosed with terminal cancer, in A Monster Calls, out Dec. 23.

Since winning his Best Supporting Actor for Whiplash, Simmons has been lying low, but, with four films yet to be released this year, that's all about to change. He'll play the father of a 27-year-old sex therapist who goes through puberty all over again due to a benign tumor in The Late Bloomer, out Oct. 7. He'll then be a Treasury agent on the hunt for Ben Affleck for the thriller, The Accountant, out October 14. Simmons will re-team with his Whiplash director for the romantic musical La La Land on Dec. 2, and then finish out the year with Patriots Day, (out Dec. 21), which looks at the hunt for the brothers who committed the 2013 Boston Marathon bombing.

Bennett's name may not be familiar to you, but that's about to change since she's got three films set to drop before the ball does this New Year's. Vogue even called Bennett the "biggest star on the horizon." She'll first be seen in The Magnificent Seven (out Sept. 23) as one of the few women in the western remake. She'll then be one of the girls in the Girl On A Train, out Oct. 7 — specifically, the woman who Emily Blunt's character wishes she was. To top it off, Bennett will finish out the year with the rom-com Rules Don't Apply, which looks at the rules that a fictionalized version of Howard Hughes applied to his employees on set of his movies.

For all those Hannibal fans out there, Mikkelsen is back with two huge movies that are definitely going to be hard to ignore this winter. First, he's in Rogue One: A Stars Wars Story playing Jyn Erso's scientist dad "whose knowledge is sought by both sides," according to Entertainment Weekly. But he'll definitely be a villain in Marvel's Doctor Strange, out Nov. 4. According to Vulture, Mikkelsen is playing Kaecilius, a baddie that isn't too well known even in the Marvel universe.

Adams is making two appearances in theaters before the year is through, both of which have the possibility of landing Adams her first Academy Award. Oscar buzz is already surrounding her performance in Nocturnal Animals, based on the 1993 novel Tony And Susan. The Tom Ford film, out Nov. 23, tells the story of Susan (Adams), who receives a manuscript in the mail from her ex-husband, Tony (Jake Gyllenhaal), and can't decide if it's a revenge fantasy novel or a personal threat. Adams' other film, Arrival is also on Oscar's radar. In the sci-fi flick, out Nov. 11, she plays a linguist who's tasked with speaking to those on a mysterious spacecraft.

Pratt's been busy making movies for the last year, which is why he's said he's taking some much-needed time off, but, before he does he's showering fans with not one, but two new films. He'll first play a gunslinger in The Magnificent Seven before showing off his romantic side in the sci-fi love story Passengers, out Dec. 21. This also happens to be the film that brings Jennifer Lawrence back to the big screen. It's almost too much box office magic to handle.

Williams is hitting us with the drama this year, playing two wives who are very different. For her first movie in two years, Certain Women (out October 14), Williams is playing a woman, who, with her husband, is trying to build a new home, only to realize there are other things in her life that need work. Then, in Manchester By The Sea (out Nov. 18), Williams is the ex wife of Casey Affleck's Lee, who is now has custody of his nephew after the tragic death of his son. This one's already got people talking Oscar for Williams.

This year, fans get to see two sides of Denzel. In The Magnificent Seven (yes, he's the third actor from that film on this list), he's the lead cowboy, and, in Fences, he's doing double duty as the lead and the director. The drama based on the August Wilson play, out December 16, has Washington playing Troy Maxson, a former baseball player who is now struggling to take care of his family. Washington is reprising his Broadway role, as is his co-star Viola Davis, who plays his wife.

Sarsgaard is adding to the ever-expanded list of Magnificent Seven actors who have multiple movies coming out in late 2016. But he's not one of the magnificent; he's actually the film's villain. In his second film of the season though, Jackie, out Dec. 9, he'll get to play American royalty: Robert F. Kennedy to Natalie Portman's Jackie Kennedy.

Technically, you won't see Kendrick in the animated film Trolls (out Nov. 4), but she's the one acting and singing alongside Justin Timberlake as Poppy, the princess of the trolls. But you will physically see her in The Accountant with Ben Affleck as Dana Cummings, who is constantly wondering, who is the accountant?

Shannon is also all up in Oscar's business with both films he has coming out. He'll first appear as LIFE magazine photographer Grey Villet in the biopic Loving (out Nov. 4), which focuses on the interracial couple who took on the state of Virginia and won. Then, he'll be seen in Nocturnal Animals as detective Bobby Andes, who isn't what he seems. “He’s estranged from his family, he’s lonely. He’s not a happy person,” Shannon told Entertainment Weekly. “But he is a straight shooter.” You'll have to wait and see if he means that literally.

In Keeping Up With The Joneses, Fisher is going to make you laugh as she tries to figure out if her neighbors (Jon Hamm and Gal Gadot) are actually really good looking assassins, or just really, really good looking. Then, in Nocturnal Animals, she gets to play a version of Amy Adams. The casting couldn't be better.

Recent Emmy winner Kate McKinnon will attempt to make you LOL this fall with the off kilter heist movie, Masterminds, out Sept. 30. She'll then work to make your holiday season a little funnier with the ensemble comedy Office Christmas Party, out Dec. 9.

Wahlberg is all about the based on true stories directed by Peter Berg in the latter half of this year. First, he'll appear in Deep Water Horizon, out Sept. 30, which will look at the final hours of the Deepwater Horizon. That was the offshore oil rig that exploded in April 2010, becoming the worst oil spill in America's history. He'll follow that up with Patriots Day, out Dec. 21, where he plays a cop who's on the hunt for the two men behind the 2013 Boston Marathon bombing.

Dern will join Michelle Williams in Certain Women, a film based on the short stories of Maile Meloy, as a lawyer who is tasked with trying to keep her client from doing anything rash after a workers’ compensation settlement doesn't go as he hoped. She'll then play the women who was married to McDonald's founder Ray Kroc in the movie, The Founder, out Dec. 16.

Fans of these 16 actors and actresses are clearly going to be spending a lot of time at the movies now until January. Have fun.

More like this
'Elvis,' 'Walk The Line' & 10 Other Movies Where The Actors Actually Sing
By Radhika Menon
Everything To Know About Obi-Wan Kenobi Season 2
By Kadin Burnett
Who Is Liam Neeson's Character In The Obi-Wan Kenobi Finale?
By Kadin Burnett
What’s New On Netflix: 'Stranger Things' & 'Mean Girls'
By Arya Roshanian
Get Even More From Bustle — Sign Up For The Newsletter