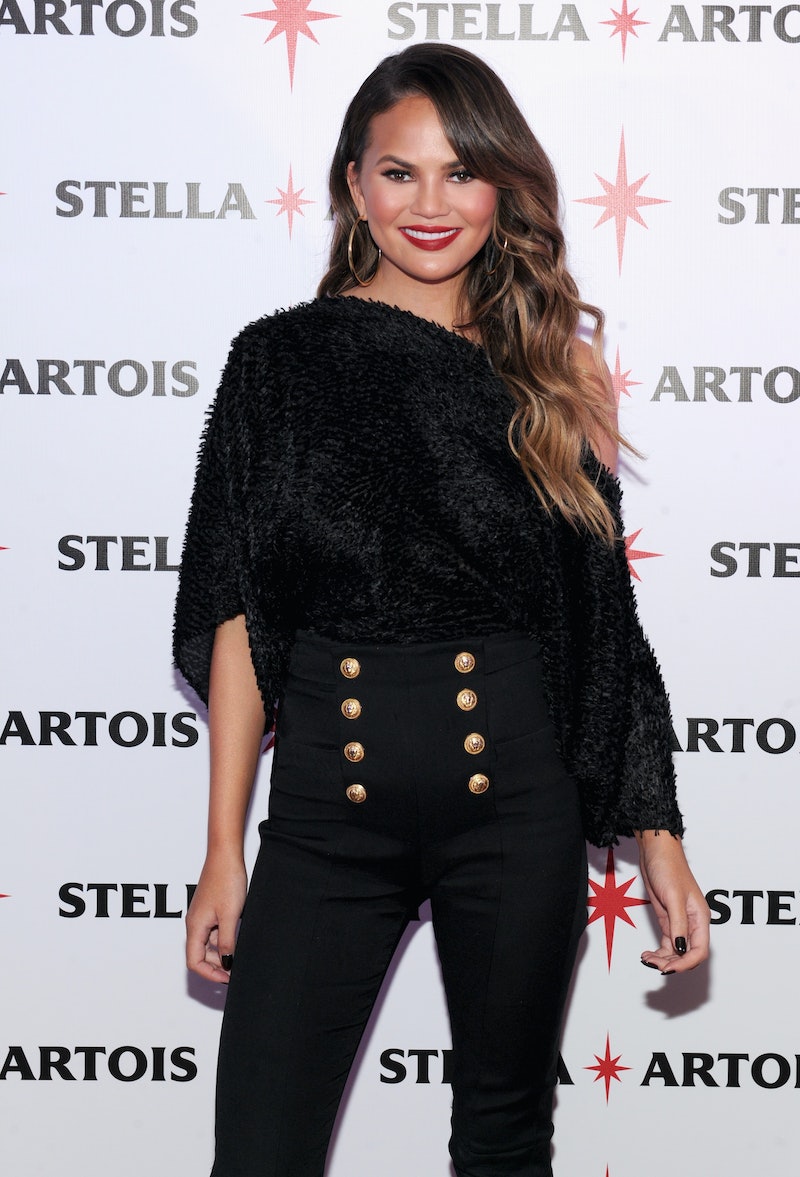 For the sake of her own well-being, Chrissy Teigen made her Twitter private last month. At the time, she wrote, "It’s not haters or trolls or generally mean people. I just feel like I am absorbing bad sh*t 24/7. My body and mind cannot handle it anymore." Considering the vitriol of tweets sent her way on a regular basis (some of which she directly responds to), the break was more than warranted. However, on Saturday, Nov. 19, Teigen temporarily made her Twitter public for just over an hour. Why? Speaking out about Donald Trump's reaction to the Hamilton cast is far too important.

As some background, vice president-elect Mike Pence attended a production of the hit Broadway show, Hamilton , on Friday night. Afterwards, Brandon Victor Dixon (who plays Aaron Burr) addressed Pence in a speech, urging him to protect all Americans. Not only that, but he quieted the booing audience. Even though the message was not hate-filled, Trump claimed on Twitter the next morning that the cast "harassed" Pence — despite the fact that there's video evidence to the contrary. This may be why Teigen decided to make her tweets public temporarily, because she couldn't believe what she was watching unfold.

With apparent sarcasm, Teigen first wrote, "Wow @realdonaldtrump is right. I can't believe they would subject poor, innocent Mike Pence to such abhorrent, evil hate speech." Then, she corrected someone who deemed Dixon's speech a "lecture." Teigen tweeted, "A lecture? A request for a peaceful 4 years? I'm so sorry they had to endure that. You cannot pretend real life sh*t isn't happening."

During her stream of tweets, Teigen added, "Anyhow, going to go back to my SAFE SPACE of private now. Daily Mail, do me a favor and don't tag my Twitter name in the inevitable article." For this reason, I'm refraining from embedding her actual tweets in this post. Instead of inadvertently adding to the hateful comments in Teigen's mentions, the goal here is to spread her important message against Trump's problematic approach to the Hamilton controversy. Defending her decision to write public tweets, she also wrote, "They're important and need to be valued and seen."

Here's one of the most poignant of Teigen's tweets:

Donald is sensitive enough to actually seek out a way to punish/get back at anyone who dare criticize him. That's such a sad thought.

While Trump is still the president-elect and doesn't officially enter office until January, the fact that he's already so quick to publicly misconstrue a speech — which aimed to spread love, foster hope, and celebrate diversity — can be a worrisome foreshadow of what's to come.

Attacking Teigen over her statements about Trump is as unfair as boycotting Hamilton , simply because the cast exercised their right to free speech. Everybody can agree to disagree, but it's when someone's words harm others (or threaten the safety and freedom in this country) that speaking out becomes more than a right — it becomes a necessity. Sure, you can say that Trump is entitled to free speech too (and he is, of course), but it's his comments that minimize sexual assault, refer to Mexican-Americans as "rapists," and attempt to ban Muslims that are not OK.

While Teigen's tweets are now back to private, her messages still resonate and are worth reading.