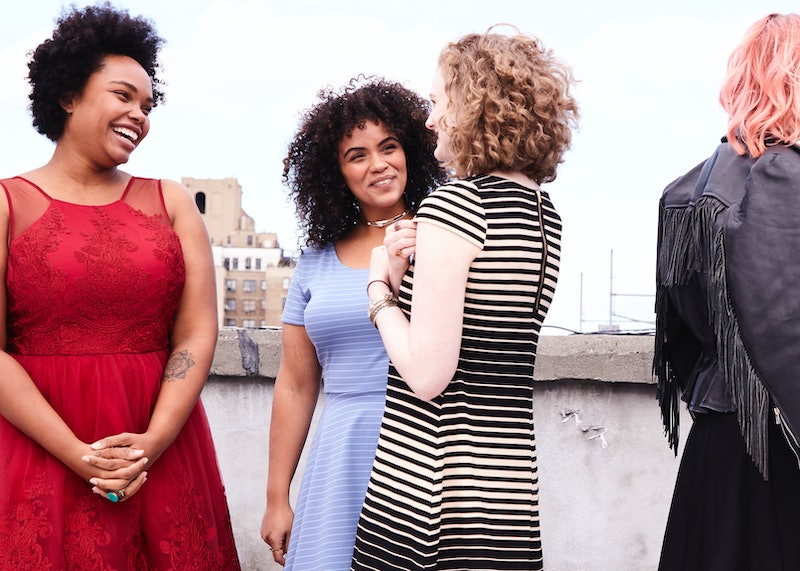 Sexism and feminism both operate on a broad scale and a micro scale, and the fortunate thing about that is, it means there are lots of little ways to make your everyday conversations more feminist. You don't have to be an activist or a politician to change people's lives; part of feminism is just being a nice person, and that alone goes a long way.

Feminism in its most basic definition is about gender equality, but it is also about empowering people to figure out what they want and speak up for it, making sure everybody is valued equally, avoiding judgment based on superficial qualities, being inclusive, and much more.

Here are some simple everyday ways to bring feminism to your conversations and interactions.

1. Ask people what their preferred pronouns are before you refer to them in the third person. You can't assume what someone's gender is based on how they look.

2. Validate people's feelings, especially their anger toward social injustice, instead of trying to "fix" them or make them feel better. Implying that someone should or shouldn't feel a certain way can border on gaslighting.

3. If somebody interrupts a marginalized person, return to the person who was interrupted and tell them you'd like to hear the rest of what they had to say.

4. If it seems like someone, particularly a marginalized person, is left out of a conversation, ask them a question to include them.

5. Ask before you touch someone, even if it's just a hug. It's not always easy to tell someone not to do that once they've already started.

6. Tell people if they've used an offensive term, especially if you're not a member of the group it oppresses. Operate from the assumption that they want to speak in a more inclusive way and will be grateful for the correction.

7. Use "I" statements to speak for yourself rather than generalizing about a group — and don't expect other individuals to represent an entire group, either.

8. If you think you relate to what someone's talking about, ask them if that's what they mean before projecting your experiences onto them.

9. Don't be afraid to ask for what you want, but also make it clear that the other person can say "no," and accept it gracefully if they do.

10. Get everybody's input before making a group decision.

11. Compliment women about things that have nothing to do with their looks.

13. Avoid using sexist insults and compliments; instead of saying "that took balls," go for something like, "that took courage" — or even, just to level things out, "that took ovaries."

14. Use the pronoun "they" when you're talking about a hypothetical person without a particular gender or someone whose gender you do not know.

15. Use the word "partner" to discuss a romantic partner whose gender hasn't been specified, and don't assume it's someone of the opposite gender.

16. Avoid phrases like "suck it" and "friend zone" that promote rape culture.

17. If you're a member of a privileged group, listen to people who discuss their experiences of oppression rather than trying to come off as an authority yourself.

18. Tell people who have experienced abuse of any sort that you believe them and it's not their fault.

19. Research how to be a better ally instead of expecting or demanding that your token female friend, friend of color, or otherwise marginalized friend to teach you.

20. If someone gets angry about something unintentionally oppressive that you've said, thank them for correcting you rather than trying to tone-police their anger.