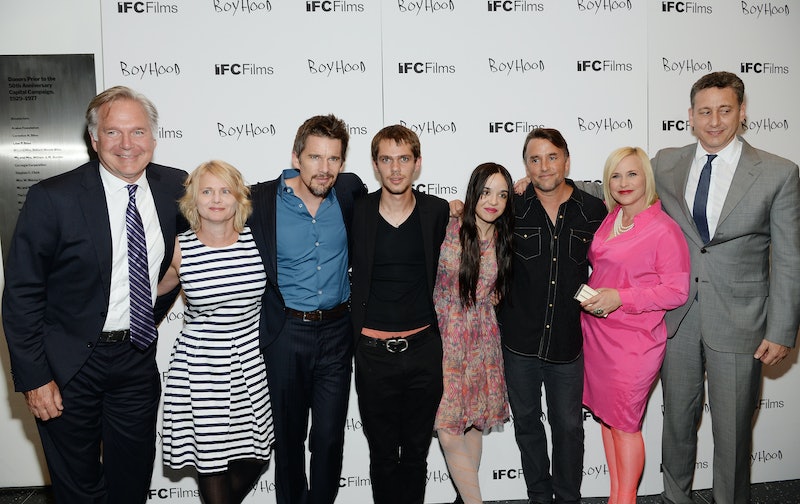 The American Film Institute (AFI) released its top 11 films of 2014 last week, many of which are being deemed as Oscar contenders. The list compiles the films, which according to AFI are, "culturally and artistically representative of the year’s most significant achievements in the art of the moving image.” The list includes A merican Sniper, Into The Woods, Selma, Unbroken , Birdman , Boyhood , Foxcatcher , The Imitation Game, Interstellar, Nightcrawler, and Whiplash . The list this year includes big-budget thrillers, indie heartbreakers, historical think pieces, war epics, and even a musical. The genres are diverese to say the very least, but in terms of "cultural representation," the list is still overwhelmingly the stories of men, particularly white men, and that's nothing new in Hollywood. Quite frankly, it gets a little boring year after year.

What is at least somewhat of a relief is that Boyhood, Birdman, and The Imitation Game challenge traditional (white) masculinity. Selma, however, stands alone as the only film whose subject is people of color. The film chronicles the work of Dr. Martin Luther King Jr. (played by David Oyelowo) and the historical marches and protests in Alabama that helped make the Voting Rights Act of 1965 happen. It is particularly stirring in the wake of the Ferguson and Eric Garner cases — when watching the trailer it's chilling to see history is repeating itself in front of our very eyes.

In total, the top American films of the year, at least according to AFI include two stories of homosexual men (Foxcatcher, The Imitation Game), one film with a non-white star (Selma), and two film with female stars (our lord and saviour Jessica Chastain and Anne Hathaway in Interstellar, though technically Matthew McConaughey gets the top billing) and Into the Woods (Meryl Streep, naturally). Among these films, Unbroken, the World War II drama, was the only one directed by a woman. That woman also happens to be Angelina Jolie, no less.

As brilliant as these films are, it's still showing the overwhelming "norm" in the filmmaking industry to focus stories on white men. Aren't we a little tired of that as is? It's not just that Hollywood doesn't recognize films about minorities or women, it's moreso the sheer fact that there aren't enough films being made about or by women and minorities. So far TV is outshining movies in making strides to increase diversity (Thank you, Orange is the New Black, How to Get Away With Murder, and Scandal). It's about time the big screen caught up with the little screen.