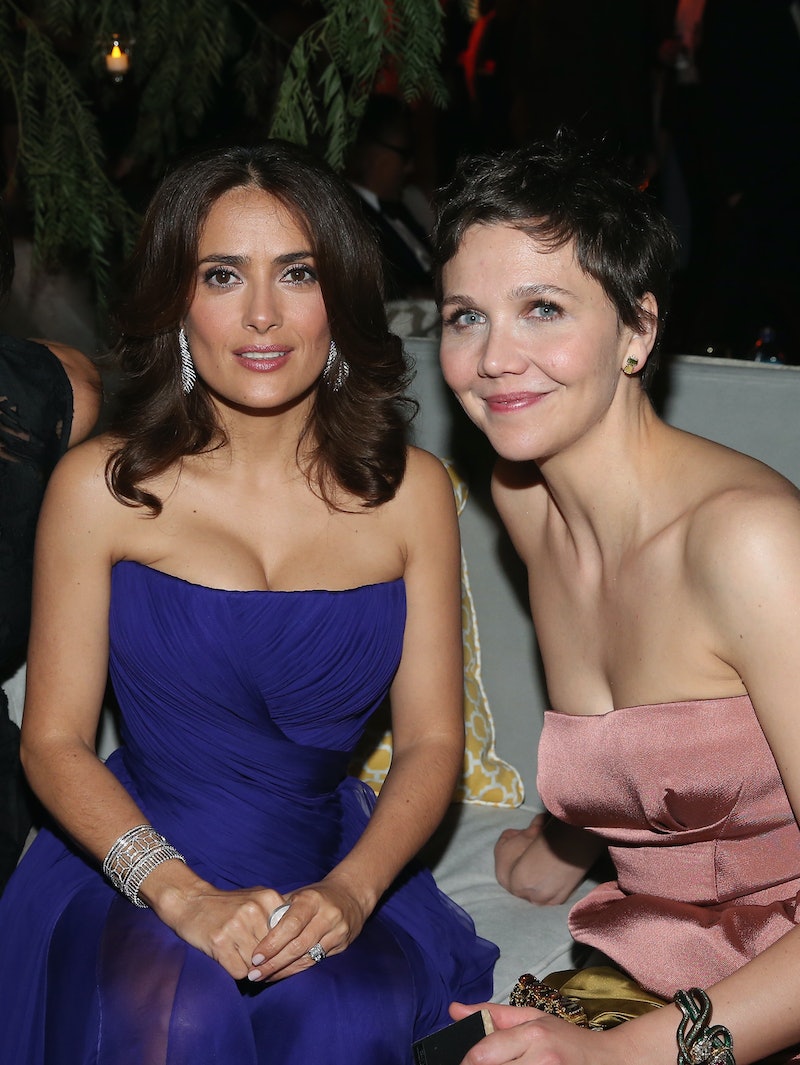 Sunday's Golden Globes have been lauded as one of the most feminist awards show to date. It certainly seemed that way with a number of jokes and speeches made about the inequalities women suffer on screen and in life. But just how feminist were the Golden Globes really when you look at the numbers? The hard data definitely shows an improvement over last year.

There was also a huge uptick in feminist speeches, but unfortunately most of those still came only from the women. The men of the night chose to stick by tried and true speeches: thanking the HFPA, their family, their fellow nominees. They kept things short and sweet, but the women winners of the night were proud to display their feminism. Of the eight female winners, all eight of them had feminist-leaning speeches. That's right, 100 percent of the women who took home Golden Globes used their chance on stage to sing out for women everywhere.

Amy Adams thanked the strong women role models in the room that her daughter can look up to. Julianne Moore thanked the people behind Still Alice for choosing to show a movie about a middle-aged woman. Patricia Arquette gave a shout out to single mothers everywhere. Ruth Wilson thanked the writers of her "complicated" character. Jane the Virgin's Gina Rodriguez thanked her sisters for being role models. Transparent creator Jill Soloway dedicated her award to the late trans teen Leelah Alcorn. Downton Abbey's Joanne Froggatt paid tribute to rape victims. And Maggie Gyllenhaal slayed with a speech about the importance of writing complicated women, not just strong women.

The feminist tones of the evening weren't limited to the acceptance speeches. Hosts Amy Poehler and Tina Fey dedicated 13 percent of their opening monologue to feminist jokes, making five throughout the 10 minute speech. "Steve Carell’s Foxcatcher look took two hours to put on every day including hairstyle and makeup. Just for comparison, it took me three hours today to prepare for my role as human woman," Tina Fey casually mentioned.

The pair also joked about how ridiculous it was that George Clooney was earning a lifetime achievement award when his wife Amal Almuddin "worked on the Enron case; was an adviser to Kofi Annan regarding Syria; and was selected for a three-person U.N. commission investigating rules of war violations in the Gaza Strip."

Even presenters Jane Fonda and Lily Tomlin joked about that age-old stereotype that women can't be comedians. “It’s nice that men at last are getting the recognition they deserve for comedy,” said Tomlin. “Finally, we can put at rest that negative stereotype that men just aren’t funny.”

The jokes about feminism far outweighed the awkward moments of sexism. Between Jeremy Renner ogling Jennifer Lopez's "golden globes" (a.k.a. her boobs) and Kevin Hart calling Salma Hayek "aggressive," there were a few cringe-worthy moments throughout the night. But with six pro-feminism jokes and only three sexist ones, it seemed funny feminism was winning the night.

If there's one thing to point out, it's that the Golden Globes were much more feminist than last year. This year they had an almost equal male to female presenter number of 25 to 22 vs. 28 to 22 in 2014. Women were nominated into categories that shut them out in 2014, and feminism was a rallying cry of many speeches. It's great that progress is being made, but things still have a long way to go.

Even though women made their way into male-dominated categories; they didn't really win them. Eight women took home statues out of 25 total categories. That means men still nabbed 68 percent of the wins. While Common gave a shout out to Selma director Ava DuVernay during his acceptance speech, George Clooney said he was proud to be Amal's husband, and Jeffrey Tambor thanked the transgender community; their voices made up only 27 percent of the 11 feminist speeches.

It's not surprising that 100 percent of the female winners talked about equality amongst women. They know it's a problem because they live it every day. Now we need more men to stand up and recognize women alongside men. They're just as necessary to Hollywood as men are, they just don't get any of the credit.

Hopefully this year's Golden Globes is just a nod to the changing times because with 100 percent of the female winners on-board, feminism stands a real chance in Hollywood to finally, finally be legitimized.

More like this
Amanda Seyfried Reflects On 'Mean Girls' & "Gross" Remarks That Men Made After It
By Jake Viswanath
Sandra Bullock, Girlboss Extraordinaire
By Matt Harkins & Viviana Olen
Spice Girls’ Net Worth: The Richest Member Is Wealthier Than The Rest Combined
By Hugh McIntyre
Lydia Leonard Is Setting The Record Straight
By Olivia-Anne Cleary
Get Even More From Bustle — Sign Up For The Newsletter