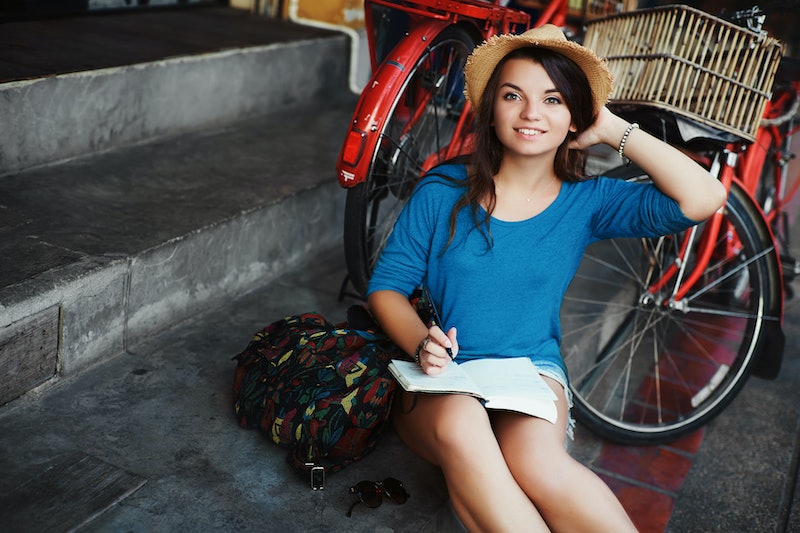 I am a female writer. This probably doesn't come as a shock to you, given that I'm female and wrote this post. However, in the past I've felt uncomfortable about identifying myself as a writer, in part due to professional insecurity (which is a whole 'nother essay or 10), but also due to issues of gender — and not just because I agree that "female writer" is a totally bogus distinction that needs to be killed for any number of valid reasons.

Rather, I've come to realize that at least some of my resistance to claiming my rightful writerly identity was because I'd internalized a number of stereotypes about what it means to be a woman writer. Many of them weren't things I was comfortable being associated with, not because they're inherently negative, but because they didn't seem to reflect myself, my creative voice, or my ambitions as I understood them. I didn't want to be pigeonholed by others and, even more importantly, by myself.

This, obviously, is one of the many reasons why stereotypes are damaging — not because they absolutely never reflect truth, or because they reflect only negative qualities, but because they're limiting. They limit our perceptions of ourselves and other people's perceptions of us, and as such limit what we can achieve. So let's look at some of these myths and kill them seriously dead with daggers and fire and lasers, because I'm tired of dealing with them, and I'm sure you are, too.

We're depressive and romanticize our pain

There are a number of female writers who seem to be nearly as famous for their suicides as they are for their art. Plenty of famous literary men have also suffered from depression, but our culture has a disquieting habit of glamorizing the connection between depression, creativity, and female allure. This is really messed up, and not just because it fetishizes depression and suicide. Buying into this notion can be self-defeating, because for many of us extreme unhappiness and creativity are fundamentally incompatible. There was a phase in college where I found writers like Sylvia Plath aspirational, because I was miserable and desperately wanted to find meaning in that. But you know how much writing I did during that time? None. Why? Because I was too miserable to do much of anything other than just be miserable. It's true that some incredible art is born of pain, but plenty of us are our at our most prolific when we're feeling good about our lives, and in turn feel good about our lives when we're doing good work.

The idea that being a woman writer means you are precious about your feelings, fixated on victimhood as subject matter, and can't have a sense of humor about anything is as stupid as the idea that all feminists are these things. And yet such notions persist, times a thousand if you happen to be a woman of color. Once I joked to a male coworker about how I'd recently written something "dark" and immediately, without missing a beat, he asked me whether it was about rape. There is absolutely nothing wrong with writing about rape, but my colleague's knee-jerk assumption that a woman's idea of darkness begins and ends with sexual abuse, as though we aren't aware of or interested in the myriad other "dark" things involved in being human, absolutely floored me. Which brings us to the myth that...

We only write well about certain topics, and those topics have less cultural value

You know how this one goes: women write gauzy "niche" books about domesticity and relationships and feelings and shoes; men write badass warrior prose about "universal" things like war and politics and society and God and mortality. Genre fiction is also viewed as a male realm, despite plenty of evidence to the contrary. Beyond the fact that such thinking does a great disservice to writing that deals with "women's topics," these bogus distinctions and hierarchies have a negative impact on women's self-perception as writers, their literary output, and their place in the canon. And then, when a woman does write a sharp, sprawling, blatantly ambitious Big Idea novel, the critical establishment practically has a meltdown.

We're confessional and exhibitionist... and that's a horrible thing because shut up ladies, nobody cares

"Confessional" writing is widely considered a female form, even though men do more than their fair share of literary navel-gazing. And while personal essays by women appear to be having a much-deserved moment, there is still a massive double standard when it comes to how such essays are received. This further reinforces limiting ideas about women's place in the literary landscape, and can discourage talented women with worthwhile stories from telling them.

We're not funny, because we're women, and women can't be funny because only men are funny

Is the world still having a hard time with this one? Apparently.

We live alone with our cats

The writer lady and catlady stereotypes tend to go hand-in-hand. But this, my friends, is a dangerous fallacy.

Full disclosure: I've spent much of the last seven years living alone with my cat, who is named after my favorite poet. I have a massive trove of pictures on my iPhone that depict her interacting with books and writing implements of various sorts. The above image is one such picture, and I just had to share it with you because doesn't she looks like a little author kitty with my notebook and my pen? I love it!

But not all female writers are like me, okay? I have a writer friend who is allergic to cats. You know how many cats she has? Zero. Another writer friend lives with her cat and her boyfriend, who is also writer, and who also brought his own cat to the relationship. Male writers love their cats too, you guys. Cats are awesome, but the catlady stereotype = bad news. Bad. News. Don't buy my allergic friend a kitten for her birthday just because she's a writer. She'll get hives.

We're lonely and difficult, and will die alone

The image of the reclusive writer is not an exclusively female one, nor is there anything wrong with being single, or with prioritizing your career over relationships. But the image of the single woman is much more loaded, across the board, than the image of the single man, and on top of this, we're still debating whether women can have literary careers and satisfying family lives at the same time. Unattached male writers tend to be lionized for their dedication to their art and/or for being large-living womanizers, implying that they are alone by choice; the underlying perception of a single women, particularly as she ages, is that she somehow failed to catch a man or couldn't find a way to "have it all." So to my mind, what is particularly insidious about the image of the spinster novelist is that it echoes the idea that female intellect is sexually and romantically unattractive, and that intellectual achievement is somehow unfeminine and thus incompatible with domestic forms of happiness. This is one of the oldest and dirtiest tricks used by patriarchal societies keep women in their place — you know, a place that does not involve reading.