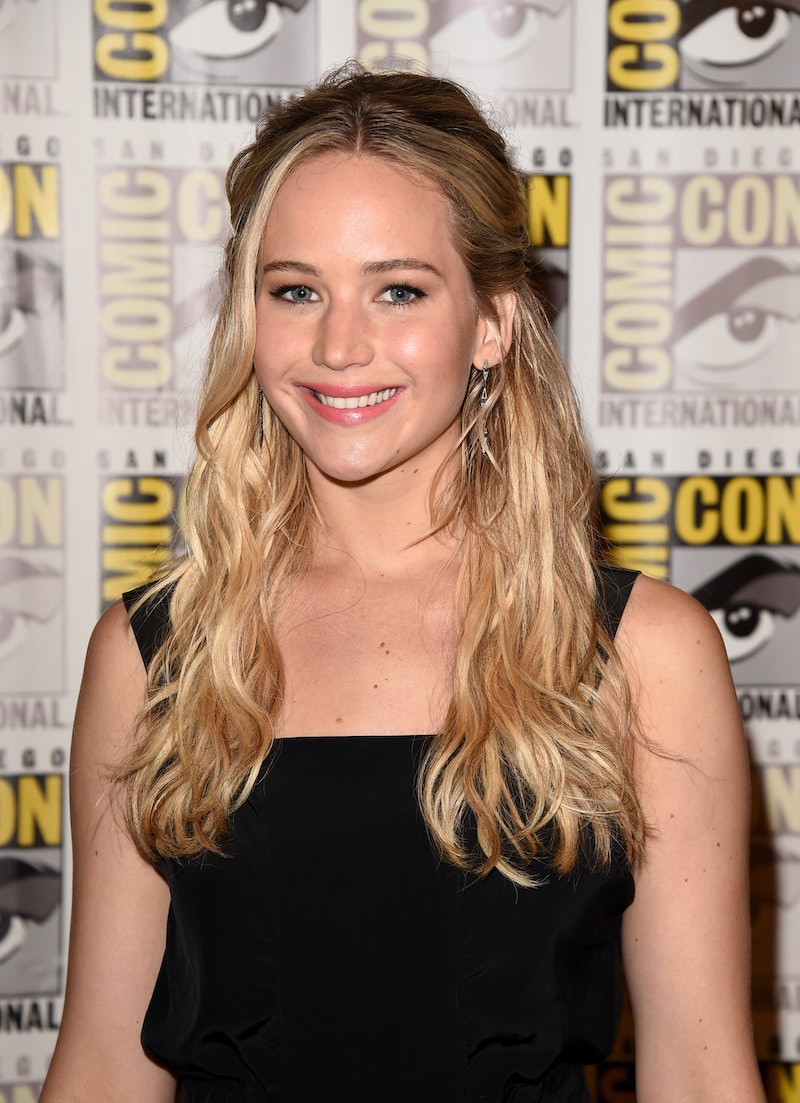 It was a busy few days for actress Jennifer Lawrence, as she attended Comic-Con 2015 to take part in a panel for her film, The Hunger Games: Mockingjay Part 2. Clearly the rigor of panel discussions and press rounds didn't wane the star's energy, as People reported that the actress was all smiles and laughter while attending Entertainment Weekly's Comic-Con party close to midnight on Saturday, July 11. Ever the social butterfly, being a favorite guest on any hot party train is old hat for Lawrence. Aside from that unfortunate puke incident with Miley Cyrus in 2014 (it happens to the best of us), the Hunger Games actress has proven herself to be a top choice when it comes to party invites. From inviting Jennifer Lopez to dance, to leaving Selena Gomez awestruck, and generally just being hailed as one of the coolest celebrities of the millennium, Lawrence is one we would be dying to RSVP to our next shindig.

Of course, it's unlikely that most of us will ever have Lawrence attend one of our parties IRL *insert sad-faced emoji here*, but let's take a look at what Lawrence would be like as a party guest (spoiler: it'd be great).

She Would Sing Cher Karaoke

Get that karaoke machine ready, because — as we saw during Lawrence's appearance on Conan — she likes to bust out her best rendition of Cher's "Believe" from time to time.

She Would Take Part In Group Selfies

Although Lawrence is adverse to social media, numerous star-studded group selfies featuring the starlet have made their way across the internet. If you have a phone and a love for selfies, it's safe to say the actress would join in.

She Would Photobomb You

Remember when Lawrence spurred so many LOLs after she epically photobombed Taylor Swift on the 2014 Golden Globes red carpet? Always one to showcase her sense of humor, I would expect some surprise appearances by Lawrence in my photos whilst attempting to select an appropriate Instagram filter.

You'd have nary a concern about Lawrence sharing that photo of you with one eye closed and nauseated after one too many Jell-O shots — the actress doesn't partake in social media. Although some of your other party guests may be more forthright in exposing any pratfalls during the night to the world wide web, having Lawrence as a guest would mean one less person you had to worry about posting pics that make you facepalm.

If you're lucky enough to have a party where Lawrence is a guest, I can only assume you have the the type of VIP access to get other celebrities to RSVP. While you may be fighting hyperventilation amidst Hollywood's elite, Lawrence would be right there with you. Remember her infamous freakout at the 2014 SAG Awards when she met Homeland alum, Damien Lewis? A-freaking-mazing.

She Would Hit The Dance Floor

If Silver Linings Playbook has taught us anything, it's that Lawrence knows how to get down.

She Would Bring Food...Or Order Food

If you've paid attention to her interviews and numerous instances of red carpet banter, you already know that Lawrence loves her snacks. Her regaling of food is so ubiquitous, she once interrupted a reporter to order some fries — #GOALS. If Lawrence didn't come toting her own tray of treats to your party, you can bet she would order some if your spread didn't match her cravings. And you know she would be ordering something delicious.

J.Law, I think I can speak for everyone when you have an open invitation to all of our next parties.